THE Moree Water Ski Park took another ‘jump’ forward this week with the formal start of construction on a range of off-water enhancements.

“Up to this point much of the focus of the club has been consolidating the ‘on-water’ and basic facilities at the park, but now there’s going to be a major transformation to put Moree firmly on the Australian and international water ski map,” Mr Marshall said. 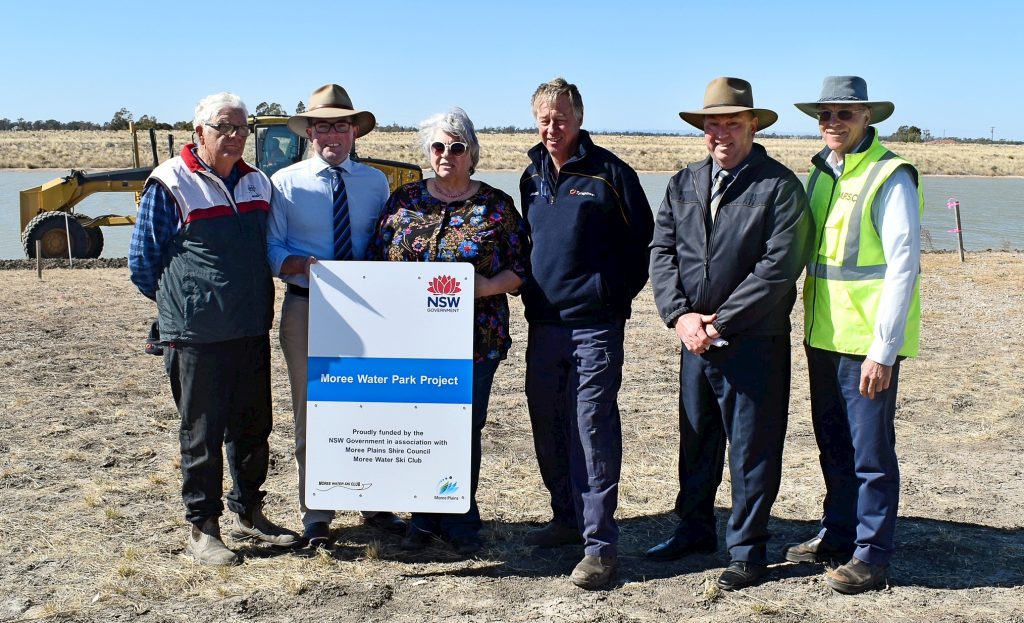 “Not only will the facility upgrades and improvements make this one of Moree’s best community assets, and much more family-friendly, it will make the Park a destination for tourists, day trippers and interstate water sport competitors and their families.

“This park is famous as a water-skiing venue in NSW already and Moree winning the right to host the 2019 National Water Skiing Championships is testament to the fantastic reputation of the Park.”

However, Mr Marshall said anyone who had spent a bit of time at the park knew, there’s a lack of amenities.

“A cash injection from the government is about to change that,” Mr Marshall said. “Moree Plains Shire Council is building a 200 metre long ‘beach’ on one of the lakes, so the entire family can enjoy the water,” he said.

“On the coast and in the cities, going to the beach in summer is taken for granted. Now, Moree’s children who are fairly isolated from that experience will now have the chance to enjoy the same type of recreation as their city counterparts.

“The beach also makes it easy for paddle craft to be launched onto the water. Council will also construct barbecues, walking tracks and build a play area for children.

“Not only will you be able to relax, but you will be able to do this in safety, with beach access far easier than entering the water from the river bank.

“Moree Water Ski Club’s vision for the Park will make this a premier destination for everyone and I was delighted to get behind the proposal and secure the funding for the development.

“Improvements to the Park are a win for everyone, from competitive skiers to families looking to cool off with their children during Moree’s hot summers.”

Park upgrades will also include secure access with automatic gates and CCTV installed.

“The gate and camera system will prevent any vandalism of the site and keep this community asset secured for everyone to enjoy,” Mr Marshall said.

“I can’t wait to see the project unveiled in full early next year.”