Minister Gay said the group of primary and secondary students from different schools across Moree had left a lasting impression on the final stage of the Moree bypass with the 15 metre long mural.

“The mural is a colourful representation of the regions history and natural assets, highlighting local wildlife such as the Kookaburra, landmarks across the Moree skyline, and the area’s productive country side. 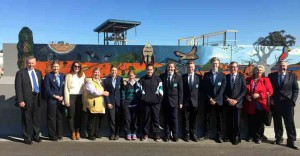 “Students from Moree Secondary College, Moree Public School, Moree East Public School, St Philomena’s School, Moree Christian School and Barwon Learning Centre were under the guidance of an aboriginal artist so that the mural was representative of aboriginal culture and heritage, something that is central to the area’s history and culture.

“I encourage the local community and visitors to Moree to come and see this – a large amount of time, effort and talent has gone into painting the mural and I congratulate all students who have been involved.”

Federal Member for Parkes Mark Coulton said the mural has already started to attract attention because of its colourful assortment of images, length and location mid-way along the length of the bypass.

“The mural is located behind the Caltex depot, in front of the bypass, and can be seen when driving on the bypass. It is definitely something visitors to Moree should come and see whilst they’re in the town.”

State member for Northern Tablelands Adam Marshall said it was great to see that some of the younger members of the community were involved in such a creative way.

“This was a valuable opportunity for the youth of Moree to take pride in a community project which represents where they’ve grown up,” Mr Marshall said.