Moree roads get $700,000 to improve freight efficiency while Moree-Inverell railway line could be back on track by December

MINISTER for Roads and Freight Duncan Gay and Member for Northern Tablelands Adam Marshall yesterday announced a $700,000 investment to upgrade three local roads in the Moree Plains Shire to improve freight links in the district.

Mr Gay said Moree’s Gosport Street, Tapscott Road and Rosedale Road, in Ashley, would be upgraded to allow B-triple freight trucks to travel along these routes, which were previously only approved for B-doubles and semi-trailers.

“More efficient freight trucks will soon be able to travel along these routes to directly access the Newell Highway – reducing the number of smaller truck movements by 3,000 each year,” Mr Gay said.

“Farms in the Moree district transport 160,000 tonnes of cotton and 130,000 tonnes of grain along these routes to gins, warehouses and receival sites each year, making these upgrades vital to the prosperity of primary producers and industries in the region.” 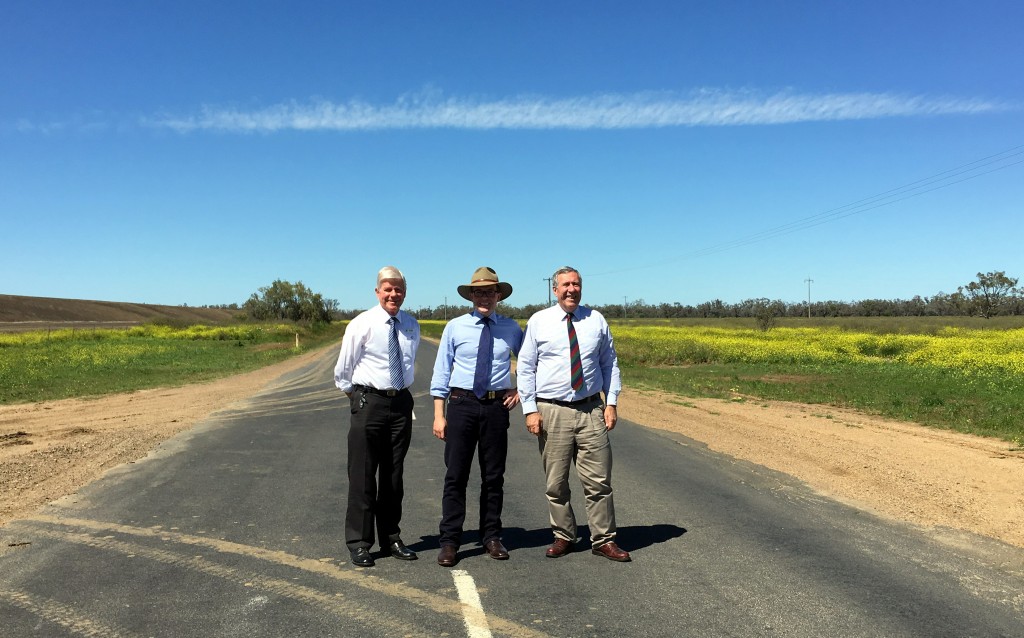 “The project involves a road reseal and shoulder widening 426 metres x 7.5 metres from the Newell Highway to Evergreen Road.

“Work will involve a road reseal and shoulder widening of 512 metres x 7.5 metres, as well as a drainage upgrade.

“The upgrade will benefit 24,000 tonnes of grain and lead to a reduction of approximately 280 vehicle trips per year.

“Everyone is a winner as a result of these upgrades – the Moree Plains Shire Council benefits from less ‘wear and tear’ on their local roads and transport costs are cut for farms and businesses wanting more productive access to the Newell Highway and beyond.

“Road safety will also be improved by delivering wider and stronger local roads.

“I commend Moree Plains Shire Council on identifying these local freight pinch-points and wanting to rectify the situation for the befit of the community.”

Mr Marshall said this funding complemented investments already made to improve critical road and freight infrastructure in the region.

“For example, the NSW and Federal governments are jointly funding the $85 million upgrade of a 28-kilometre section of the Newell Highway between Mungle Back Creek and Boggabilla,” he said.

“The project will help resolve longstanding road safety and freight efficiency issues – with significant improvements being made to the road surface and extra passing lanes being built.

“There’s also a major upgrade of a dangerous six-kilometre section of the Carnarvon Highway between Moree and Ashley and almost $ million being spent contrasting extra overtaking lanes on the Newell Highway.

“For many years now, the NSW and Federal coalition governments have been working closely together to fast track upgrades to key freight routes in regional NSW.”

Meanwhile, Mr Gay and Mr Marshall yesterday inspected a 2.8-kilometre section of the Moree to Inverell railway line that will be reinstated as early as December this year as part of the NSW Government’s $15 million Fixing Country Rail pilot program.

Two-million-dollars is being invested to restore the line at Moree and is in addition to the NSW Government’s $400 million Fixing Country Rail program.

Mr Gay said the reinstatement of this railway line would see 250,000 tonnes of grain and 6,400 twenty foot containers of cotton and pulses per year taken off council and state roads in the region and on to rail.

“The NSW Government is determined to shift more bulk freight on to railway lines, like the one here at Moree to ensure we get produce from paddocks to ports as quickly and efficiently as possible,” Mr Gay said.

“The freight transport network is the backbone of the state‘s North West and we need to improve its efficiency to take more freight off our local and regional roads – a massive win for regional communities, economies and the state’s producers.”

Mr Marshall said once this track is open for business local industries could see freight cost savings of $25-tonne from Moree to Port of Newcastle.

“The Moree Plains Shire produces 22 per cent of the grain grown in NSW, so this investment is vital for ensuring the future of freight rail in the Northern Tablelands,” Mr Marshall said.

“This investment into the railway line coupled with big cost savings that will flow is great news for our local producers and the region as a whole.

“This is just the beginning though – with another $400 million available under Fixing Country Rail, I’m looking forward to even more local projects to improve rail freight efficiency in our region and for our state.”

Broadbent Grain submitted the funding application for the Moree project and will also invest $3.7 million towards building hardstands and equipment to load grain trains.

Since March 2011, the NSW Government has invested more than $1 billion in the operation, maintenance and upgrading of the Country Regional Network which comprises of 2,386 kilometres of operational railway lines.

Petition launched to reduce daylight saving by one month

Next post
Petition launched to reduce daylight saving by one month