MOREE Race Club will swing open the gates, fire up the barbie and turn on the beer taps at its new-look February meeting to say a heart-felt thank-you to the individuals and community groups that helped make last year’s Christmas twilight races such a huge success.

More than 5000 people filed through the turnstiles on December 16 last year, making the yuletide race meeting arguably the biggest event on the Moree social and sporting calendar.

Moree Race Club is a not-for-profit organisation and for the club, raising money for the community and helping community groups is at the heart of its operations.

Club secretary Michelle Gobbert said the recent Christmas race-day on December 16 was a great example of how a community comes together so that everyone benefits.

“Our committee has just nine volunteers who, along with a huge contingent of ‘once-a-year’ volunteers and local businesses, community groups and individuals, help make that race-day a success,” Mrs Gobbert said.

“From the businesses that lend their commercial air-conditioners, to the truck for the band and the tradespeople who turn up after a call from a mate to lend a hand or do a ‘last minute’ job, as well as those that man the gate or drink ticket sales – everyone makes a difference,” she said.

As a result of this generosity Moree Race Club will dedicate its next race-day to the Moree community. 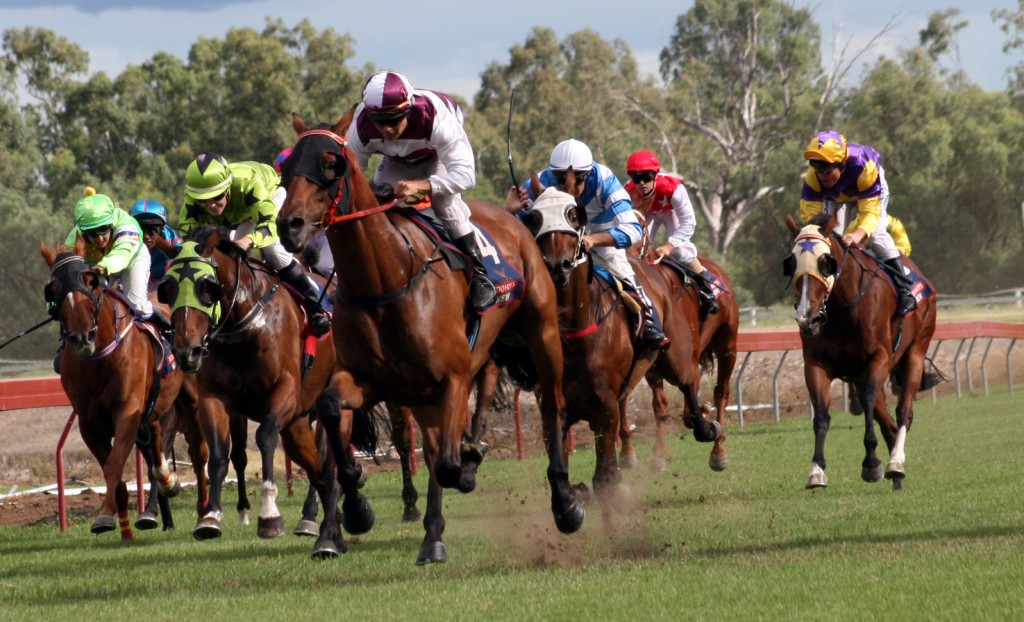 Moree-owned gelding The Bargain wins the 2013 Moree Cotton Cup, a race that became the Moree Chopper Cup in recent years. The February race-day will now be called the Thank You Moree Community meeting, with the all-important Westpac rescue Helicopter Service fundraiser being moved to the Moree cup Meeting weekend in September (Image Copyright Bill Poulos).

The Thank You Moree Community race day on Saturday, February 17 will be in appreciation of the volunteers, businesses, community groups and individuals that helped make the 2017 Christmas races a success.

Businesses, community groups and individuals are invited to come along and bring their staff and families.

Gate entry is free and there will be a free sausage sizzle and a happy-hour between 1pm and 2pm. Gates will open at midday and the first race will be run at 2pm.

Club president Rob Mather is looking forward to the change and also the format for the February race-day.

“There are too many people to name individually that make the Christmas race-day a success, and this is a small way to be able to thank the people of the Moree community. We hope that a lot of these people can make it to the races on Saturday, February 17,” he said.

The February meeting has traditionally been a fundraiser for various vital services and community groups and in recent years morphed from the Moree Cotton Cup to the Moree Chopper Cup, raising much-needed funds for the Westpac Rescue Helicopter Service.

“This year sees a change to programming, with the fundraiser being transferred to the Moree Cup weekend of September 1 and 2,” Mrs Gobbert said.

Mrs Gobbert said the change came about for a couple of reasons.

“February is often quite warm and from the horse racing side of things, nearly too hot sometimes to race,” she said.

“Also, it is not a TAB race-day so often the fields are quite small.

“That, along with a decreasing race-day crowd, has prompted the club to make the move to September and hopefully the spring weather will be kinder, and with a full TAB race-day there will be larger fields.”

“We are extremely excited with the 2018 fundraising weekend moving to the Moree Cup meeting on Fathers’ Day and working with the Moree Race Club to provide a quality social event on the Saturday night, and again on race-day,” Mr Galbraith said.

If you are a community-minded person, the Moree Race Club is looking for new committee members.