IT’S now been twice in as many weeks that Moree wool-buyer Cliff Horton has worn shoes and socks to the races – and for good reason, too.

Horton, a Mungindi old boy, has been known to wear out the odd pair of double-pluggers.

But in recent weeks he’s pulled on the socks and laced up the boots – good ones at that – to watch his horse Shamurt race.

And Shamurt, a two-year-old filly he bred and owns with good mate and neighbour Jimmy Stevens, hasn’t let the side down.

She’s only been to the races twice in her life, for wins at Doomben and Toowoomba – and she’s picked up nearly $160,000 in prize money and bonuses along the way.

Suddenly, these two mates from the bush who simply love their racing just might have a genuine Brisbane Winter Carnival contender on their hands.

Shamurt, trained in Brisbane by Tony Gollan, won on debut like a good horse at Doomben and confirmed her potential by posting a track record win at Toowoomba last Saturday.

Ridden by leading hoop Jim Byrne, Shamurt stalked the leaders to the home turn before overpowering Cuddle Me Tight to score by a long neck.

Cuddle Me Tight, from the Ben Currie stable, had been heavily backed midweek from 5-1 into 7-4 on favouritism before easing to even-money at post time.

But the Love Conquers All filly – a real jump-and-run type of two-year-old – could not withstand the finishing burst of Shamurt, which set new figures for the 1100m trip on the Toowoomba StrathAyr surface. 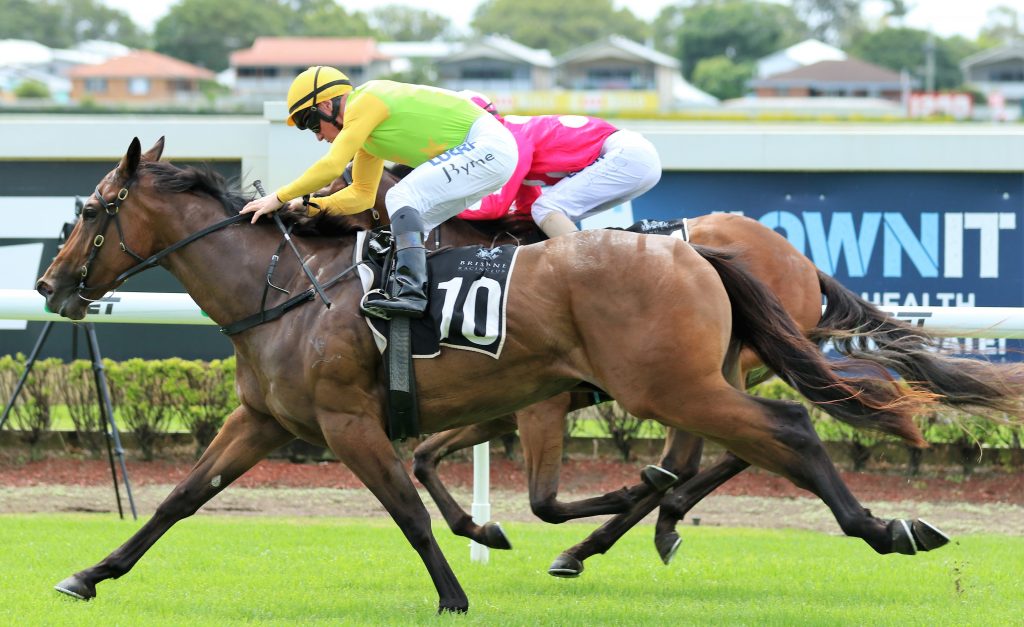 Easy does it: Shamurt wins with something in reserve at Doomben (Image Copyright Darren Winningham, www.horseracingonly.com.au).

The win was also just seven-tenths of a second outside Royal Entourage’s turf benchmark established 17 years ago.

It was a performance that now has Stevens and Horton wondering if Shamurt is ‘the one’.

Every racehorse owner across the country, whether they are proud bushies or slicked-back city-slickers, always dream of getting that one, good horse.

It’s the dream that keeps the racing game ticking over, and Stevens and Horton just might find themselves living that dream in the months ahead.

They’ve raced a few handy horses over the years, but Shamurt just might be the one they’ve been looking for.

“From what she’s shown so far, well, she could be anything,” Stevens says.

Stevens and Horton have been mates for more than 25 years.

They share the same street as well as quite a few beers, and a love of horses that has given them a lot of fun but limited success – until Shamurt came along.

They raced Free Near Free a few years ago as well as Moree Boolooroo Cup winner Joppick in partnership with Moree panel-beater Don Sweeney.

“We’ve always been in a horse or two – that’s how we started out,” Stevens said.

“In the early days Cliff was in a few horses with people from out Mungindi way.

“We had Free Near Free with the Gollans and brought him back to Moree for Peter (Sinclair) to train, and we’ve had a few horses since,” he said.

“We just couldn’t believe that two blokes from the bush could breed this horse and win in Brisbane,” Stevens smiled. 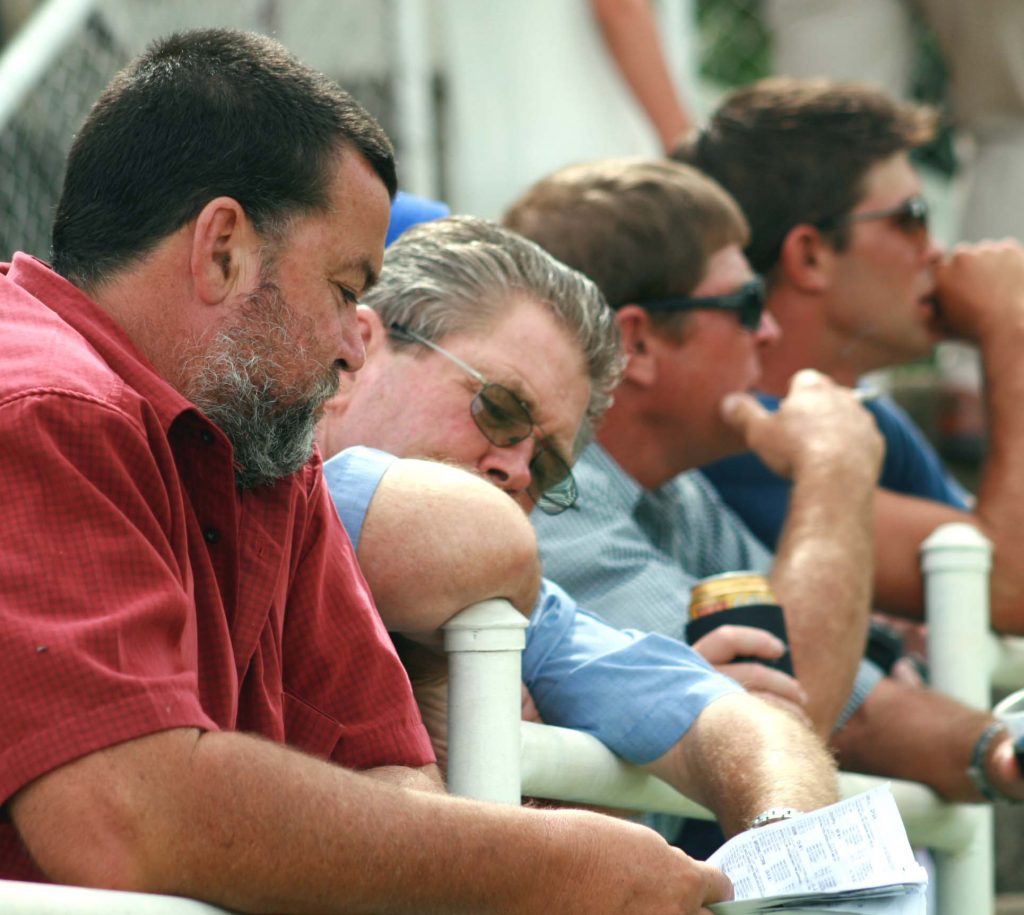 “I think what’s happening is a bit of a one-in-a-million thing. We’re on a bit of a rise – we just didn’t expect to get a horse like this.”

Stevens believes that Shamurt’s brace of wins suggest she will get even better when stepped up over a little more ground.

Races like the Champagne Classic and Sires’ Produce Stakes during the Brisbane Winter Carnival have been mentioned – and not quietly, either.

“Both wins were pretty much the same, although she was a little bit closer to them at Toowoomba,” he said.

“But she had to be because there were high opinions of the horse that ran second (Cuddle Me Tight). She hit the ground running.

“We were worried that no-one was going to take on the favourite, and racing too close could have put Shamurt out of her comfort zone.

“I think she will show more when she gets up over a little bit more ground, and a lot of people are saying that she will make a better three-year-old,” Stevens said.

It’s been a long, potholed road to the Brisbane winners’ circle for Horton, who bred Shamurt after buying the filly’s mother, Sheza Shamardal, at a ready-to-run sale in 2012.

“Unfortunately, we found out later that Sheza Shamardal had a crook shoulder; there was a crack there.  Apparently, it was a foal injury,” Horton said.

“We got her in work twice but she went lame on us both times.”

“Sadly, her first foal died after 12 months. It was by Murtajill, too,” Horton said.

“The foal after Shamurt is by Whittington, and he’s just on 18 months old. She’s also got a Whittington foal at foot – he’s five months old now.” 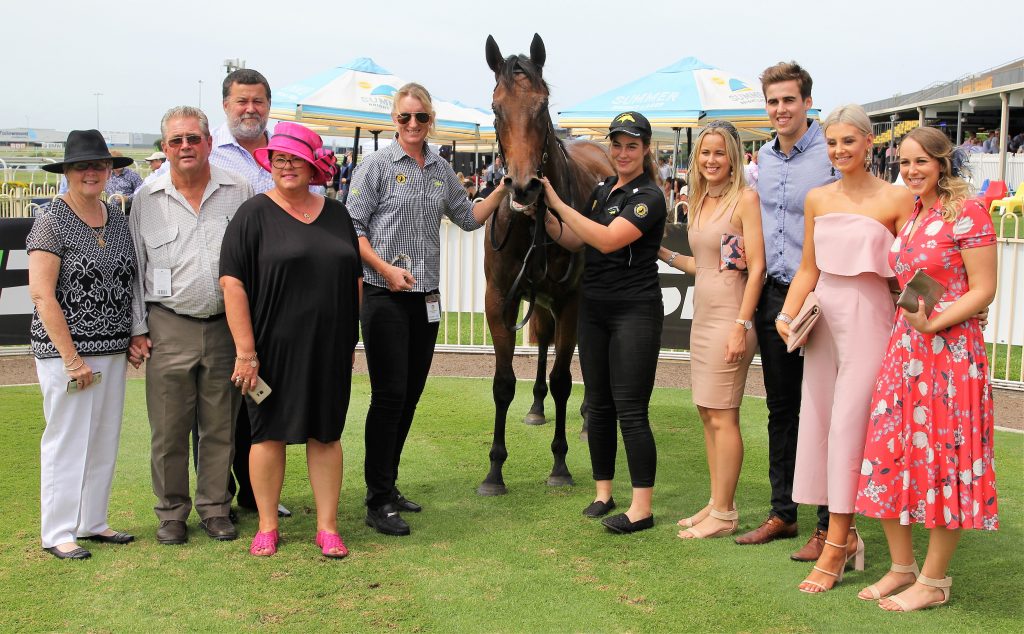 Shamurt was educated for stable life and pre-trained in Moree by Peter Sinclair, who quickly jerried that the filly was something special.

Just like he’d done many times in the past with other stable clients, Sinclair advised Horton and Stevens to try aiming just a little bit higher with Shamurt.

Shamurt went to Tony Gollan, who this season has had exceptional success with two-year-olds Ef Troop and Outback Barbie.

“Peter (Sinclair) was good enough to tell us to send her away. From a local angle, that’s the most important thing in all of this,” Horton said.

“Peter saw her first and it was only after about six weeks that he thought she was worth taking away somewhere . . . we owe him a lot.

“He told us that and then things started to get really weird. When we sent her to Lindsay Hatch for pre-training, he also said the filly had a bit of ability,” he said.

“But really, it’s a case of just being lucky, I think. And sometimes you just don’t realise how lucky you are,” he said.

“And you won’t get a better bloke than Jimmy Stevens to race a horse with – you have to push him out of the way to pay for anything,” Horton said.

Meanwhile, Horton is still trying to adapt to being fully shod when attending metropolitan race meetings.

His first attempt at Doomben ended in disaster when he brushed off the cobwebs from a pair of shoes that had lain dormant at the back of his shoe closet for many years, possible decades.

“It wasn’t much fun,” Horton smiled.

“I got some shoes out of the cupboard at home for the Doomben races and when we got dressed at the motel, the soles fell off them.

“I had to borrow a pair to get to the races,” he laughed.

Darren Winningham is a photo-journalist who attends Queensland metropolitan and provincial race meetings. His photos, regular tips and insights – Winno’s Winners – can be found at www.horseracingonly.com.au.