WHEN Horace Walpole, the 4th earl of Orford, coined the word serendipity in a letter to Horace Mann more than 260 years ago, he was referring to an ancient Persian fairytale that had absolutely intrigued him.

The Three Princes of Serendip was written nearly 200 years before Walpole ‘invented’ the word and tells the tale of three princes gifted with making fortunate and pleasant discoveries by sheer accident.

Fast-forward the calendar quite a few hundred years and 10 princesses have been discovered in Moree – a pleasant and indeed fortunate discovery that also happened by pure chance.

Serendipity, an all-female vocal group headed up by musical director Michele Maurer, is destined to be just what Horace Walpole suggested way back in 1754 when he submitted the word to the English lexicon.

“A small rural town in north-western NSW is not the most obvious place for an all-female vocal group to be developed but that is exactly what has happened in Moree,” Ms Maurer says proudly.

Ms Maurer explained that at a chance meeting of strangers 12 months ago, the conversation turned to music – in particular vocal music – and from that serendipitous meeting, Serendipity was born.

“The group developed quite organically as each person was individually seeking a creative, musical outlet that involved singing, especially singing in close harmony,” Ms Maurer said.

“How they stumbled upon one another was quite serendipitous, hence the group’s name – it absolutely sums up their ethos.”

Serendipity’s 10 members come from varying musical backgrounds and range in age from just 12 to ‘60ish’.

But they all have one thing in common – they love to sing.

Youngest member Reese Boughton has been in Moree all her life and has always been involved in the arts and sporting activities while Demi Thorburn, also a Moree local, currently attends St Philomena’s High School. 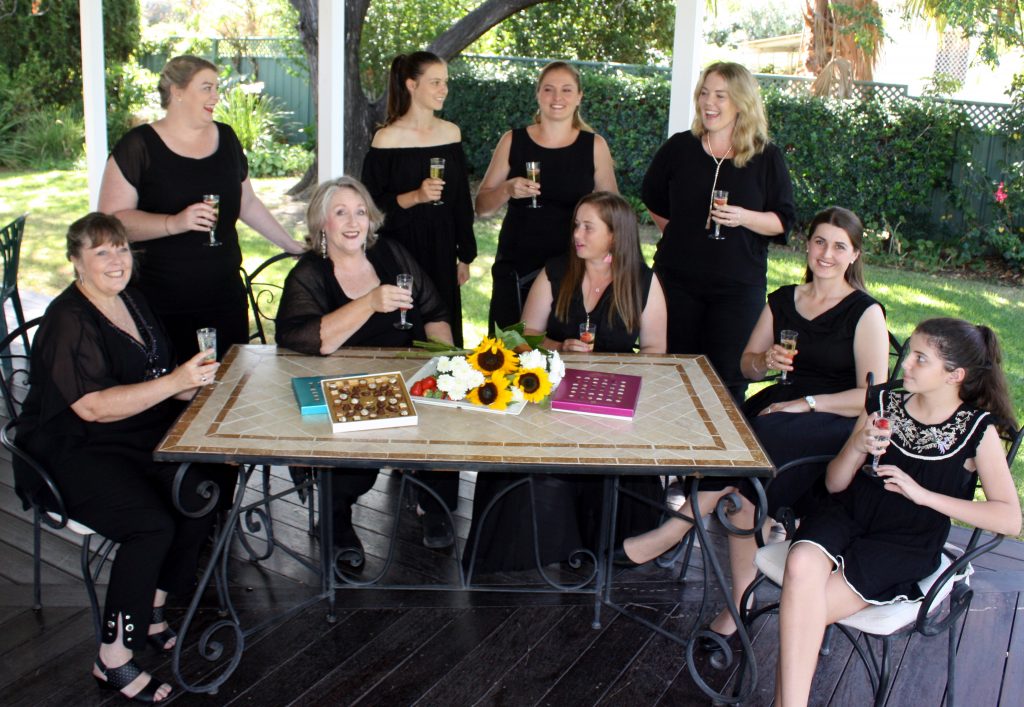 Serendipity will perform at Moree Town and Country Club for two consecutive nights on Friday and Saturday, June 1 and 2 (Image supplied).

Kathleen Burke, a professional costume maker, relocated to Moree from Tamworth and has long been involved in choirs and music theatre.

Fiona Norrie is well-known in both the agriculture and arts communities and works as an agronomist in Moree.

“Fi is an involved community member, having appeared in Sticky Sweet and as a member of the Moree Community Choir,” Ms Maurer said.

Jamie Ellery hails from northern Sydney but is another Serendipity member to relocate when her partner was posted to Moree.

“Jamie comes from a musical family and has been involved with music her entire life,” Ms Maurer said.

Kate Lumber has most recently appeared in the media as one of the finalists in the Royal Easter Show Miss Showgirl event and her interest in agriculture led to a career in agronomy.

“Kate is a talented young woman. She has been involved in recent MACT productions and is also a member of the Moree Community Choir,” Ms Maurer said.

Helena Ross has featured in various MACT productions in recent years as well. She is also a local, however she did venture to the big smoke for a few years.

“Helena has loved singing all her life and, after a time away from the stage, she is again treading the boards,” Ms Maurer said.

Erin Ross, a Moree Public School teacher, is another home-grown talent. She has always loved to sing and is involved with choirs when opportunities arise.

Sue Coleman, a nurse at Moree Hospital, is a long-time local resident and well-known in the community.

“As a trombone player, Sue has been a member of the Moree and District Band for many, many years. She was also a member of the now-defunct Moree choir, A Special Blend, for 11 years,” said Ms Maurer, who jokingly reckons she can almost call herself a local after residing in Moree for 37 years.

She has always been heavily involved in community activities, particularly the arts, and was musical director of A Special Blend.

Ms Maurer has also directed, choreographed and performed in numerous local productions and is delighted to have been offered the opportunity to lead Serendipity.

“As a vocal group, the girls’ voices are their instruments,” Ms Maurer said.

“They specialise in acapella singing – singing without accompaniment. But they also love to collaborate with other musicians and enjoy working with pianist and composer Ritchie Hair, as well as talented musicians Stuart King, Patrick Quirk and Lachlan King.”

A segue from All About That Bass to Psalm 23 (The Vicar of Dibley theme) and  Torah Orah, sung in Yiddish, is all part of a normal rehearsal night for the group.

“Serendipity sings because they love it, and they hope you’ll love listening,” Ms Maurer smiled.

Serendipity will make a special appearance at Moree on a Plate on Saturday, May 12  – a serendipitous  event just as Horace Walpole suggested all those years ago.

It is all part of preparations for Serendipity’s inaugural concert Serendipity Sings, playing at Moree Town and Country Club for two consecutive nights on Friday and Saturday, June 1 and 2.

Seating is limited with only 60 tickets available for each night and seats are expected to fill fast.

Tickets will be on sale at Sylvia’s Fabrics on Heber Street, Moree from tomorrow (Tuesday, May 1) at just $20 each.

“The evening will run for approximately two hours and will feature both group and solo performances with a special surprise performance at the very end,” Ms Maurer said. 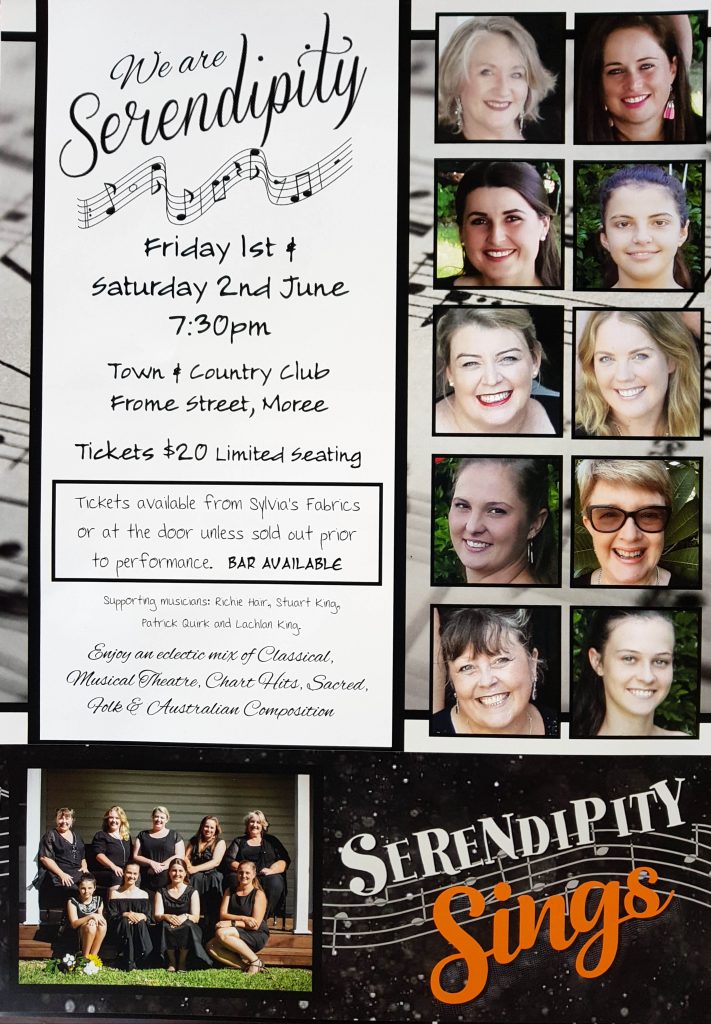