MOREE’S favourite racehorse Free Billy is back with a track record-breaking vengeance, making a small but handy team of horses look like bit players in the 1400m XXXX Gold Goondiwindi Cup on Saturday.

It was Free Billy’s sixth win since transferring to Sinclair, and comes nearly 12 months to the day after winning last year’s Chopper Cup first-up for its proud Moree owners.

The gelding, a bargain-buy at just $8000 that has quickly gained a cult-like following on local tracks, stalked the leaders to the home turn before charging away in the straight to win in track record time.

Free Billy, ridden by ace Tamworth hoop Darren Jones, shaved half-a-second off Danu’s 1min 21.42sec benchmark set in 2004 in a performance that belied a front-running trend on a leaders’ track.

“He was the only horse to win all day that didn’t lead, and he did it comfortably at the finish,” said Sinclair, who also saddled up all-the-way winner Montague Clan.

Free Billy, a half-brother to Saturday’s Group 3 Zeditave Stakes winner Benz, had resumed two weeks ago with a lacklustre tail-ender at Toowoomba over an unsuitable 1000m, but the step up to 1400m at Goondiwindi on Saturday suited perfectly. 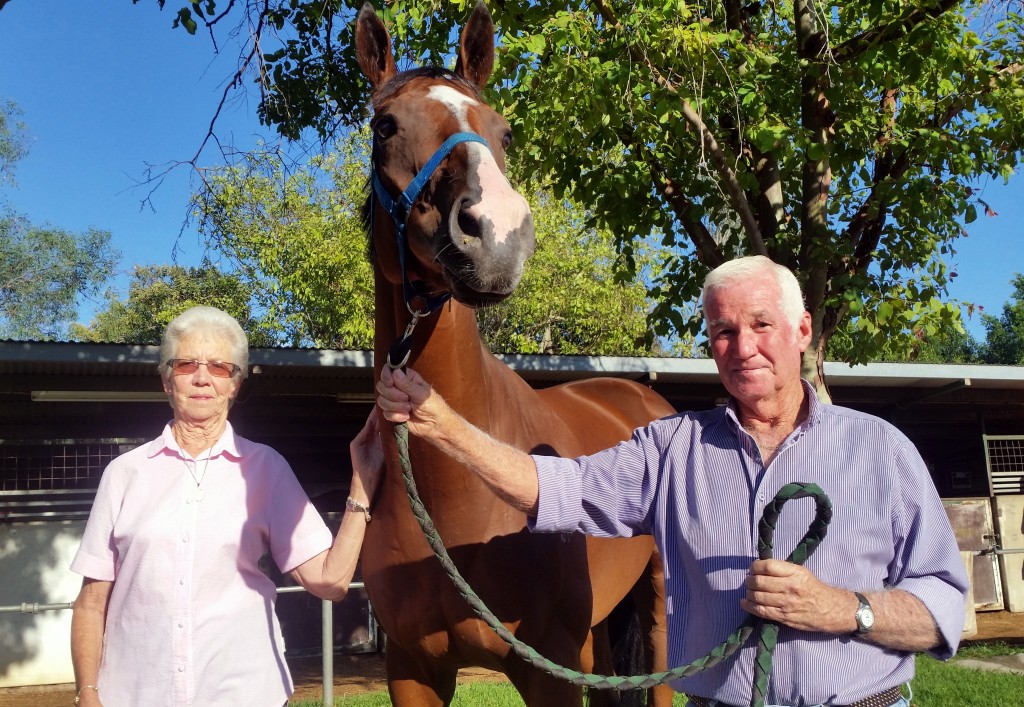 It was a timely return to form after concerns that there “was something not quite right” with the gelding.

“He’s been a little bit off lately, and the Goondiwindi Cup was always going to be the indicator as to whether he was back or not,” Sinclair said.

“We’ll just look around for another race; I’m not sure where we’ll go to next.”

Sinclair said Montague Clan was aided by a perfect ride from Jones, who gave punters the heads-up when opting to bypass the corresponding Gunnedah meeting to travel a few extra hours and ride for Sinclair at Goondiwindi.

“The ride won the race – Jonesey pinched it,” Sinclair said.

“Jonesey kicked on the corner and that’s what won the race – the ride won it.

“And it’s a credit to Jonesey that he came all the way from Tamworth to ride for us. He’s been great for the stable and he made the trip worthwhile for himself – and worthwhile for us,” he said.

“The Gunnedah races were also on and he could’ve driven three-quarters of an hour up the road to ride there, but he stuck with us.”

Sinclair also started Track Flash and Smart Option on Saturday and while Smart Option finished eighth in a blanket finish in the 1000m Agri Smart 0-55 Handicap, the ever-improving Track Flash was desperately unlucky not to finish closer in the 1400m Morgans BM-55 handicap.

“Maybe we should’ve got three winners for the day, but that’s the way it goes,” Sinclair said.

“Track Flash made up nice ground – his run was decent – and I think he’ll win a good race somewhere.

“Jonesey keeps saying that he really likes the horse, and that’s always a good sign,” he said.

Also in local news this week:

JUST getting that one good horse is the dream of every racehorse owner the world over.

And it’s a dream that is coming true in spades for Pallamallawa cattle and grain farmer Phillip “Roughie” Tonkin at his first-ever crack at the caper. Click link:

MOREE Plains Shire Mayor Katrina Humphries says Moree could end up with no air service at all if the proposed deregulation of the Moree-Sydney air route is adopted by Transport for New South Wales. Click link:

MOREE Plains Shire Council is encouraging locals to lend a helping hand for Clean Up Australia Day, with efforts for this year focused along the Mehi River from the Services Club through to the west of Dr Hunter Bridge (main town bridge). Click link:

MEMBERS of the public are invited to bring their flood photographs and provide personal feedback on the results of the flood mapping study presented by Moree Plains Shire Council and WRM Water+Environment at Council’s committee room, Level 1, 30 Heber Street, Moree at 5.15pm nextTuesday, February 28. Click link:

Petition to reduce daylight saving by one month tabled

A PETITION of more than 6000 signatures supporting the reduction of daylight saving by one month has been tabled today in State Parliament by Northern Tablelands MP Adam Marshall. Click link:

Adam Marshall: I stand with the community and MPSC to maintain the regulated route and will make every effort to ensure this occurs

Next post
Adam Marshall: I stand with the community and MPSC to maintain the regulated route and will make every effort to ensure this occurs