On a cold Saturday afternoon in Moree on June 24 in 1922, Gunnedah defeated the St Hilary Football Club 8-2 in a game of rugby league before a huge crowd at the local sports ground.

Just about the whole town turned up to watch the game and attend post-match celebrations at the parish hall later that night.

A special players’ banquet was held at the Golden Gate Café, opened the previous year by Theo Pascall.

On the same day, at a spot then known as Brick Hill about a mile west of the Moree town centre, an Aboriginal baby boy was born to James and Grace Graham.

The birth was quite unremarkable and went by unnoticed, except for the fact that the baby boy, Noel Briggs, recently celebrated his 100th birthday at his beloved Yarraman home with family members and close friends.

That birth a century ago was the start of a local legacy that is still growing to this day.

To get a grip of Noel’s longevity, in 1922 the world was still getting over the Spanish Flu pandemic and peace-time after the Great War was just four years in the making.

The T-model Ford was still a teenager and the FX Holden was 26 years away from rolling off the production line at Fishermen’s Bend in Melbourne. 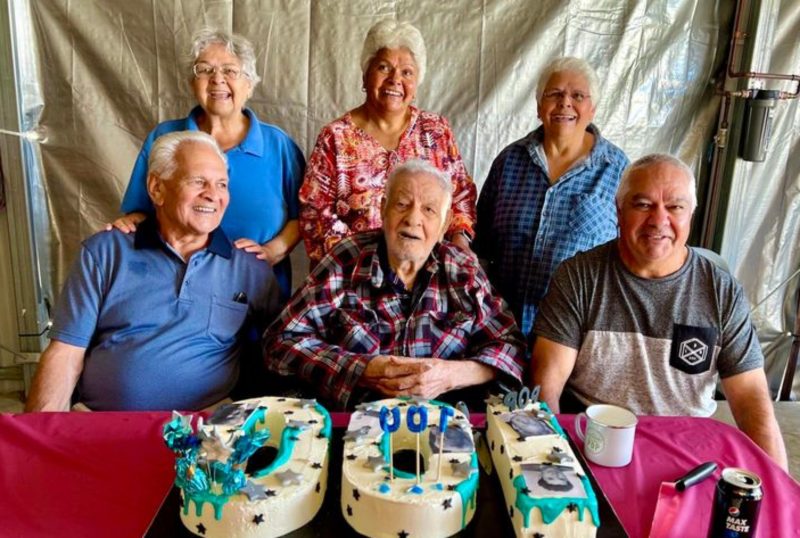 Noel’s life is a rich tapestry of love of family and respect and admiration for humankind.

It is a life that has been shaped and created against all odds over a century of hard work and determination.

Noel Briggs is an inspiration, not only to the people of Moree Plains Shire where he has lived and worked his entire life, but for the whole nation.

On Friday, June 24 Noel gathered with his family and friends in the house he built with his own hands at Yarraman and celebrated his remarkable milestone.

Noel, his older brothers James, Norman and William and parents James and Grace, spent their early days at Terry Hie Hie before relocating to the old Top Camp Aboriginal Reserve on the edge of Moree.

After a few years, the family moved to Yarraman, just north of town, where Noel still lives.

On October 9, 1943, Noel married Peggy Daley and children Ian, Yvonne, Shirley, Barbara, Bernie and Peter were welcomed to the fold.

Noel’s daughter, Barbara, said life at Yarraman was tough in the early days.

“Dad lived at Yarraman with his parents until he and one of his brothers, and a nephew, built a house for his family, which he is living in today,” Barbara said.

“Dad helped his father grow fruit and vegetables. They worked the land with a plough drawn by two large draught horses.  Water was pumped from the river into man-made gullies through heavy pipes which had to be moved throughout different sections of the garden.

“Dad spent a lot of spare time growing fruit and vegetables and in later years would take produce to town to give to people in the community.”

Not that there was a lot of spare time.

Noel worked on various properties and shearing sheds across the north and north-west and New England districts for more than 50 years.

“Dad’s first job was at Midkin Station when he was 15 years of age,” Barbara said.

“Dad was a hardworking man and sometimes away from home for long periods of time to provide for his family. Even though he has limited education, barely able to read or write, he has the ability to repair machinery and motor vehicles,” she said.

There will also be a special acknowledgement from the Moree Aboriginal Interagency Group on Monday as part of NAIDOC week celebrations.

“So many people, both locally and former locals of Moree – including brothers Bob and Colin Brown, who are now in Melbourne – have sent dad birthday wishes and messages,” Barbara said.

“Our family would also like to thank Herb O’Neill and the girls from Yumme Tumme Cakes for the delicious cake they gave dad as a birthday present; it was truly a beautiful gesture,” she  said.

“On behalf of our Council and our Shire, I congratulate our newest centenarian,” Cr Johnson said.

“Noel is the father and patriarch of one of Moree’s most famous families and it is a wonderful achievement to reach such a milestone.

“Thank-you Noel for the contribution you personally, and your family, have made to our town and district over so many years. Enjoy this momentous occasion,” he said.

“Noel’s birthday is made all the more special due to his indigenous heritage, with the life expectancy for indigenous Australians well below to national average,” Cr James said.

“Noel has well and truly surpassed this by reaching such an amazing milestone.”

Barbara said her father is a proud, humble man who worked hard all his life to provide for his family.

“Dad is loving and protective of both family and friends, and is a quiet, private, and gentle-natured man,” Barbara said.

“He is kind and caring, and always polite and respectful to others, and is well-respected within the community.

“Dad has been a role model for us in that he and mum instilled good work ethics and values into all of us,” she said.