Mr McDonald was among the supportive crowd at the NSW Police Force College last Friday when the four made the attestation parade of Class of 329 at Goulburn.

Class 329 includes 130 recruits who have attested as Probationary Constables. These new recruits will commence on-the-job training on Monday and will continue distance education before graduating with an Associate Diploma in Policing Practice. 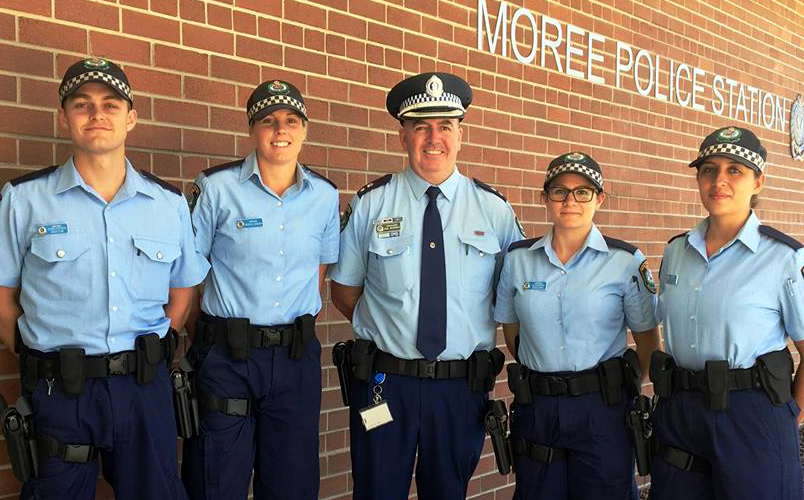 Mr McDonald said the new probationary constables will confront the challenges the job will offer in the Moree area, with commitment and enthusiasm.

“The new officers still have 12 months on-the-job training and study by distance education with Charles Sturt University before they graduate with a Diploma in Policing Practice,” he said.

“Once they graduate, the officers will then be confirmed in the rank of Constable.

“While there is still a lot to learn the four new officers are a welcome addition to the Moree ranks,” he said.

Local MP Adam Marshall welcomed the new officers as well as another that will start duties at Armidale Police Station – and he says the local communities will welcome them with open arms.

“On behalf of our region, I would like to congratulate them to their commitment to training and moving into our local areas to help to combat crime and protect the community,” Mr Marshall said.

“I know the qualifications they have completed at the Police Academy, together with the on-the-job training that our officers will undertake with the Barwon and New England commands, will ensure they are more than adequately prepared for this important role.

“Policing can be a very challenging career and our officers encounter the best and the worst of humanity, so I’m very pleased that those forces in this region will benefit from the enthusiasm of five new officers starting their job on the beat.

“But I also know they are moving into areas that overwhelmingly are honest, law abiding and welcoming and they are communities that are generous and considerate of new comers and will make them feel right at home.”

Mr Marshall will be meeting with the new officers this week, to welcome them to the region personally.

He said the region had fared well this year, with seven new recruits from the academy allocated to Moree and three at Armidale.