MOREE-owned-and-trained galloper Free Billy – the gelding that has quickly gained cult status across the north and north-west as he angles towards a hometown cup win next month – needs to overcome a wide gate and big weight to win at Eagle Farm on Saturday.

Free Billy has drawn barrier 15 in the 1400m Spring Racing Carnival Handicap and will carry 56.5kg around the spacious Eagle Farm circuit.

But trainer Peter Sinclair says his stable star has the class and ability to overcome both obstacles.

“He’s in a hard race – there are a few good horses in it – but the track will suit him,” Sinclair said.

“Barrier 15 is not ideal but if I had the choice between barrier 15 and barrier one, I’d take 15 every time because of the way he races.

“He might have the job ahead of him, but if we don’t go we don’t get that final run before the Moree Cup,” Sinclair said. 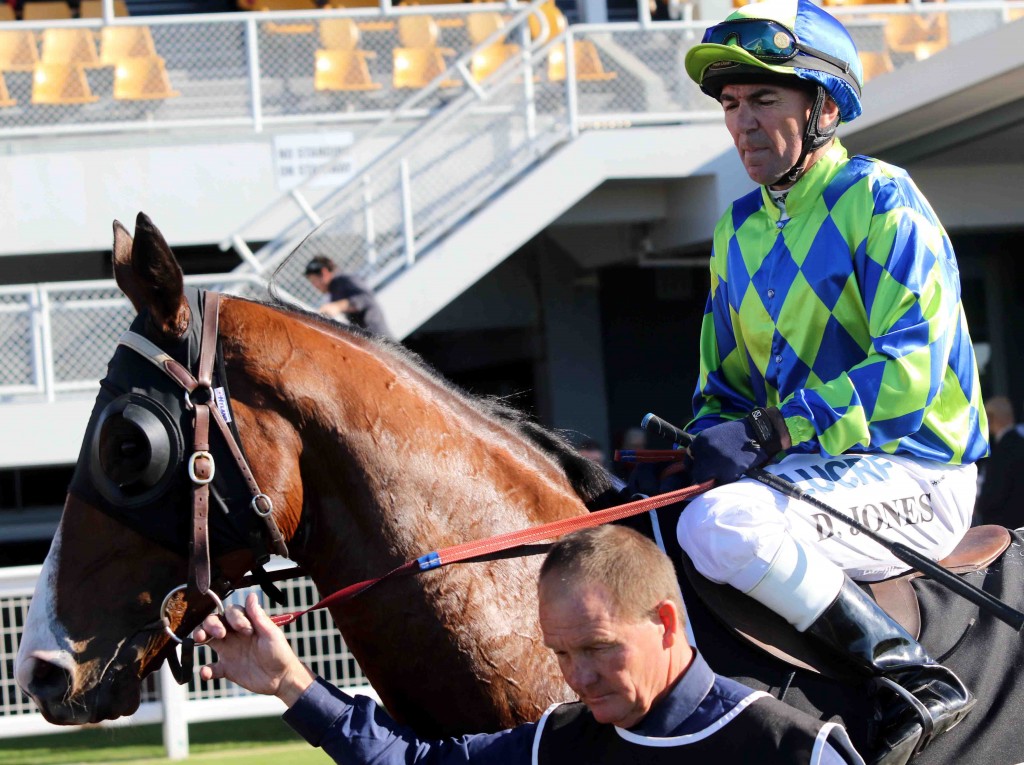 Trainer Peter Sinclair parades Free Billy, with regular hoop Darren Jones on board, at Doomben two weeks ago. Free Billy rattled home to finish fourth on a track that didn’t suit and will relish the wide, open spaces at Eagle Farm on Saturday. Image courtesy of Graham Potter, www.horseracingonly.com.au

Free Billy has given members of Moree’s well-known Bryans family the ride of their life since winning the Moree Chopper Cup back in February – the gelding’s first start for its new owners.

And while Free Billy went on to win at Armidale (twice), Goondiwindi and Toowoomba, it was the six-year-old’s fast-finishing nose second in the 1600m Gunnedah Cup back in May that prompted connections to aim for a hometown Moree Cup win on Fathers’ Day.

“When he was just beaten at Gunnedah we decided there and then to freshen him up and set him for the Moree Cup,” said Sinclair, whose only win in Moree Race Club’s signature race was with Storm Boy 20 years ago.

Sinclair has slipped a bridle over plenty of good horses since he first began training back in the early 1990s, including Nova, Samoan Lad, Tolanda and Doctor Flash, and he rates Free Billy right up there.

“He’s not as good as the best ones I’ve had but he’s right up there with the likes of Samoan Lad and Doctor Flash,” Sinclair said.

With regular rider Darren Jones on board, Free Billy at the 400m peg had just five runners behind him in the 16-strong field before charging home late to finish fourth, beaten just two-and-a-half lengths behind Shipwrecked, Old Habits and Monster of Energy.

“The first three horses across the line only had 54kg and he was fourth with 59kg. They went a little bit too quick for him early and at the 800m he was struggling to keep up with them, but he found the line nicely.

“He’ll have this run and then we’ll freshen him up for the Moree Cup,” he said.

“It’s good that Jonesey will travel up from Tamworth to ride him again and hopefully he’ll be on him in the Moree Cup as well.”

Sinclair also starts Track Flash in the 1300m class 2 handicap at Toowoomba on Saturday and Real Blonde in the 1400m BM-50 handicap at Inverell.

Track Flash has been tagged as the ‘next big thing’ after reeling off successive wins on bush racing’s Golden Triangle at Moree, Mallawa and Talmoi before announcing his arrival on the professional circuit with a dominant win at Moree on July 21.

“We’ve got apprentice Les Tilley to ride him. He rides well and can still claim 1.5kg so we get in with 53.5kg,” Sinclair said.

Real Blonde should be spot on after three strong runs at TAB tracks and will appreciate a huge drop in class on Saturday.

“She’s going all right too, and the 1400m will suit her perfectly,” Sinclair said.

Are you pumping too much iron? Hemochromatosis Awareness Week now on