MOREE Vehicle Restorers’ Club members are reeling after losing everything in an alleged deliberately-lit fire that gutted their club house at Moree Showground on Sunday.

But the club, which had only just re-formed and was attracting new members on a daily basis, will fight to live another day, says club treasurer Rod Hodges.

“We’ve lost everything – there is not one thing left,” despaired Mr Hodges, a club member for 30 years.

“There is 50 years of memorabilia totally gone. We had old photos and club number plates that belonged to people that were club members over the years.” 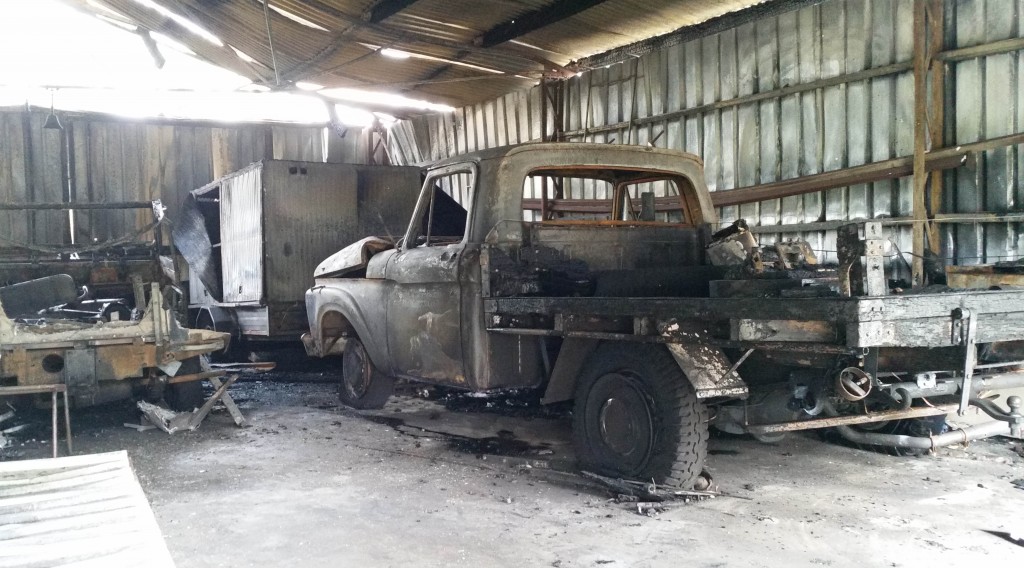 50 years of Moree Vehicle Restorers’ Club had gone up in smoke.

“All we have left is some paperwork that Owen Lloyd was doing from our last meeting – that’s still at Owen’s place,” he said.

The club had just started to get going again, with a surge in membership signaling a bright future.

“We’d had problems with member numbers but we had a meeting a couple of weeks ago and started to get going again,” Mr Hodges said.

Moree Lands Department has granted the club permission to hold its next meeting in the grandstand pavilion.

“We have to try and find another shed, but we don’t have much to put in it now,” Mr Hodges said.

“Our next meeting will be in a fortnight and we were going to clean out the clubhouse, but now there’s nothing left to clean out.

“We have a few good members coming back, so all we can do is try and build it up again . . . we won’t be closing down, I know that,” he said.

“We were very lucky, because our PA system and a lot of other things were in the shed,” Mr Munn said.

“We lost a few pieces of hessian and the heat maybe melted a bit of speaker wire, which is nothing.

“It’s so sad for the vehicle restorers’ club, though. Their shed is absolutely gutted – there is nothing left of anything in there,” he said.

Hatch and Torrens looking for cup day success at Tamworth