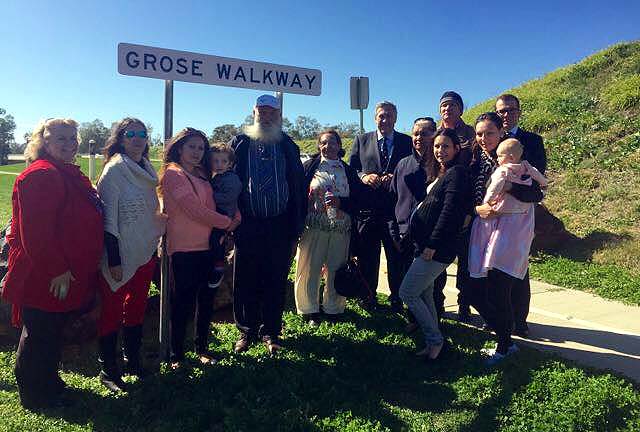 Members of Moree’s Grose family with Duncan Gay and Adam Marshall at the opening of “Grose Walkway” at Moree yesterday. Photo: Adam Marshall

Minister Duncan Gay said the contribution of the local Grose family in Moree, will be recognised with the 500 metre Grose Walkway, which links River Street and Oak Street beneath the Greg Jones Bridge, now named in their honour.

“Bill Grose is a founding member of the Moree Community Liaison Group which was first established in 2004 to work with the NSW Government to deliver the best outcomes for both stages of the bypass work,” Mr Gay said.

“Bill, along with fellow Aboriginal representative the late Lou Swan, provided valuable input throughout the years to bring the bypass project to fruition. “Bill spent his childhood in the Steel Bridge Camp on the banks of the Mehi River – which was across the river and opposite the newly dedicated walkway at Moree, and has given some fascinating accounts of his own memories of life alongside the site of the new bypass.”

Federal Member for Parkes Mark Coulton said the Grose family, led by ‘White George’ Grose was the first family to establish the Steel Bridge Camp which is now across from the bypass.

“Bill proudly tells the story of how his father built a home across a number of years at the Steel Bridge Camp for his family of nine children,” Mr Coulton said.

“The house was built mainly out of kerosene tins and was extended as the family grew to eventually include a concrete floor and a water tank.”

State Member for the Northern Tablelands Adam Marshall said it was an honour to be among the first people to walk along the walkway.

“Bill is an elder of the Moree Aboriginal community and is no stranger to community service having spent 24 years working at Byamee, a local facility to support the homeless, before his retirement,” Mr Marshall said.