MOREE pianist Tom Williams has travelled the world in recent years in pursuit of musical excellence.

And that journey brought him back to where it all began on Friday evening when he collaborated with Bingara opera diva Lexi Hutton for a one-night only performance at Bank Art Museum Moree.

It was the first time they had performed together – and it was a performance that had the entire audience mesmerised.

Concert of Classics was a one-hour performance that featured opera, piano solo pieces and popular numbers from My Fair Lady, Mary Poppins and Porgy and Bess.

The BAMM audience was treated to a world-class performance by two exceptional performers that learned their craft at Moree and Bingara – a couple of bush towns an hour apart that Mr Williams and Ms Hutton still proudly call home.

They were introduced to each other through a mutual friend that Mr Williams studied with at Staatstheater Braunschweig in Germany.

“Lexi was this mythical person from my childhood. We met when I was living in Germany and got in touch with her as we had some mutual friends from around Moree, and also professionally.

“When people ask me what I think opera is I say: romantic and loud, with a love story that is always tortured,” Mr Williams smiled.

Mr Williams trained for five years at The Southport School playing in school ensembles as well as the Gold Coast Youth Orchestra.

In 2006 he began a bachelor of music at Melbourne University – long regarded as “the school of music” – and in 2012 was awarded a place at the National Academy of Music. 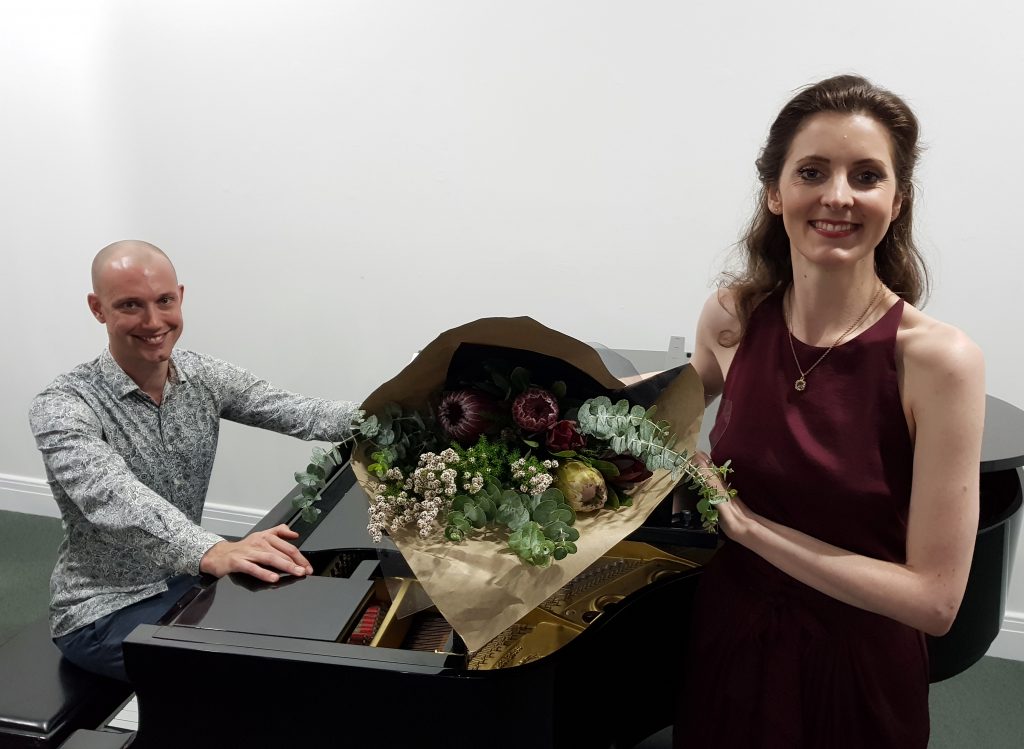 This enabled Mr Williams to study with the best students and teachers in Australia and to partake in regular master classes, concerts and other performance opportunities including a tour with Paul Kelly.

“It is a very rare experience to be able to play a piece from a living composer, and a composer that is actually with us here tonight,” Mr Williams said.

Mr Hair’s piece, It’s Always Ourselves We Find in the Sea, is named after a line from an EE Cummings poem, Maggie and Milly and Molly and May.

“As a composer the part I hate the most is trying to explain my music,” Mr Hair said.

“Before this evening I spent about an hour trying to explain what it’s about and I got it down to two sentences, but I can reduce that even further,” he smiled.

“It about the feeling of nostalgia but I really don’t like to explain my music too much . . . I just like it to be ‘felt’ rather than explained.”

She has been in Berlin for more than five years as a member of the Deutsche Opera Berlin ensemble.

She commenced there as a young artist, and has risen through the ranks to be a principle ensemble member of the company with lead roles in productions of Cosi fan tutte, La Boheme and La Rondine.

Ms Hutton recently debuted as Susanna in Mozart’s Marriage of Figaro, a comic opera composed in 1786.

“The whole opera is nearly four hours long and Susanna is on stage for three of those hours,” Ms Hutton said.

“She’s not singing the whole time but Marriage of Figaro is so complicated; there are so many different things going on – it really works your brain and your concentration more than your voice.”

Ms Hutton trained for six months to perfect the role.

“It’s just not about memorising the words or the music. Because we sing with our muscles, not our throats, it takes a really long time to train all the right muscles to support the voice,” she said.

Despite such a large body of work, Ms Hutton says she does not expect to ‘peak’ as an opera singer for quite some time.

“The voice does develop as you get older and as you train it,” she said.

“Opera singers shouldn’t really be reaching their career peak until their mid-40s. That’s when the muscles stop growing and stop becoming flexible, so by then you can really learn how to use everything properly.

“That’s when you develop your artistry as well as your depth of sound.