But the retired Moree retailer knows what she likes – and she absolutely loves what yoga instructor Jenny Jones-Wilton has done with her former haberdashery and clothing store on East Moree’s Gosport Street.

Molly, now 95 years of age and still as sharp as the pins she once used when decorating her  window displays, traded from 335 Gosport Street – one of Moree’s best-known shopfronts – for more than 50 years. 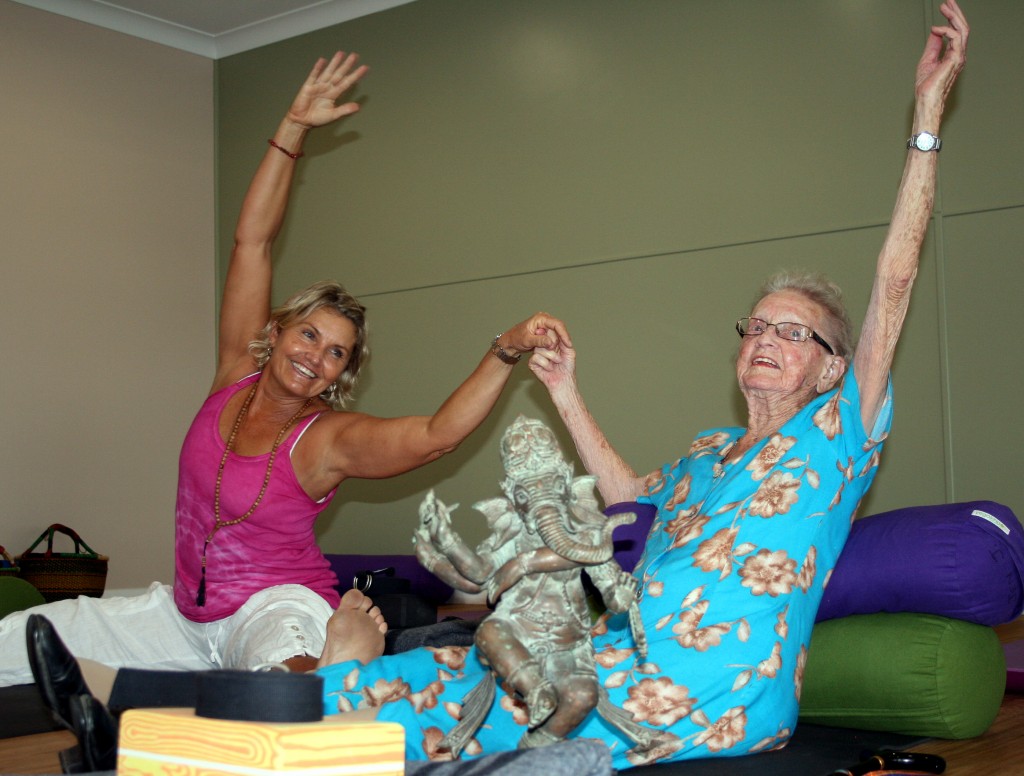 Molly, now 95, says she’s unsure about signing up for yoga classes after a trial session earlier this week.

During the past five decades Molly’s shop was made famous for many reasons, but none more so than the giant pink elephant that once guarded the front door.

The motorised elephant was just 10-cents a ride and kids from far and wide would queue patiently for the chance to be a mahout for just a few minutes. 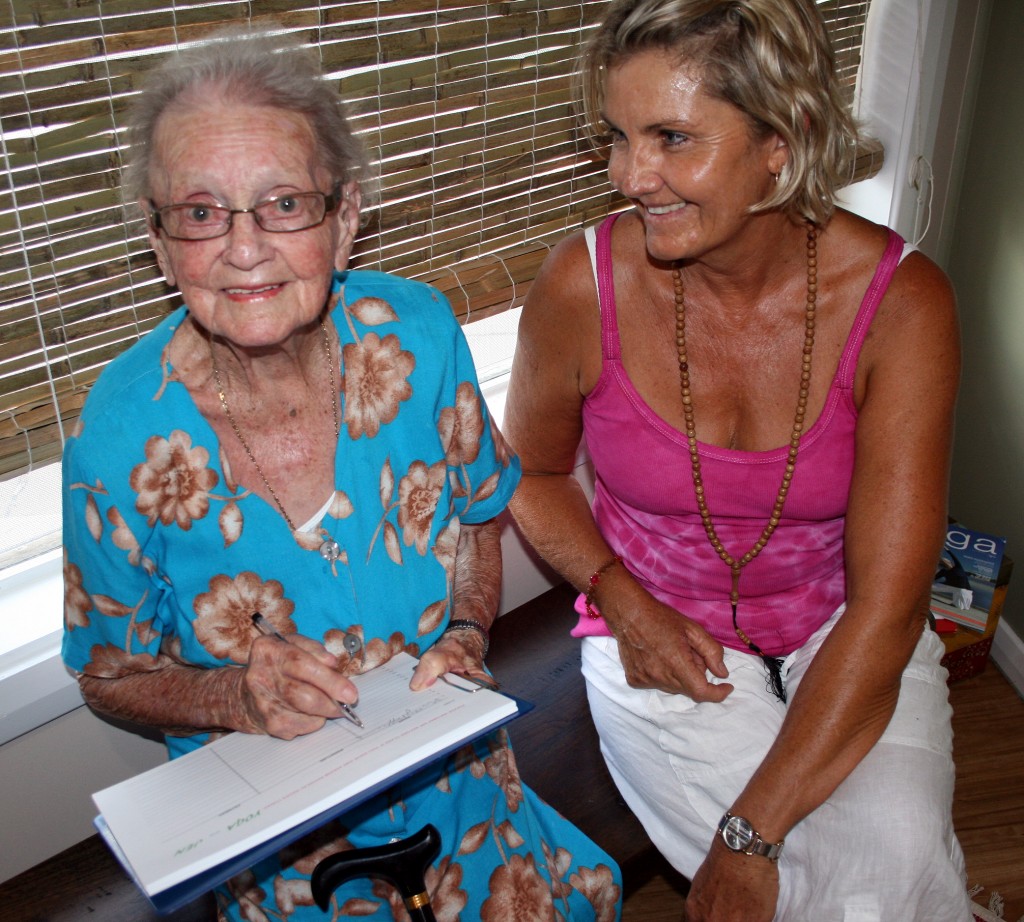 Incredibly, it’s just 18 months since Molly retired and, after a massive clearance sale, she reluctantly placed the building on the market.

During the past 12 months there were a few enquiries and a few tyre-kickers, but no serious offers were made on the historic building.

That is, until Jenny Jones-Wilton stepped in with a few ideas in mind.

Bookcases stacked with rows of second-hand novels journals and magazines; shelves once chock-full of giftware and apparel; and rack upon rack of women’s clothing and menswear have been replaced with yoga mats, towels and the calmness of a freshly refurbished wellness centre. 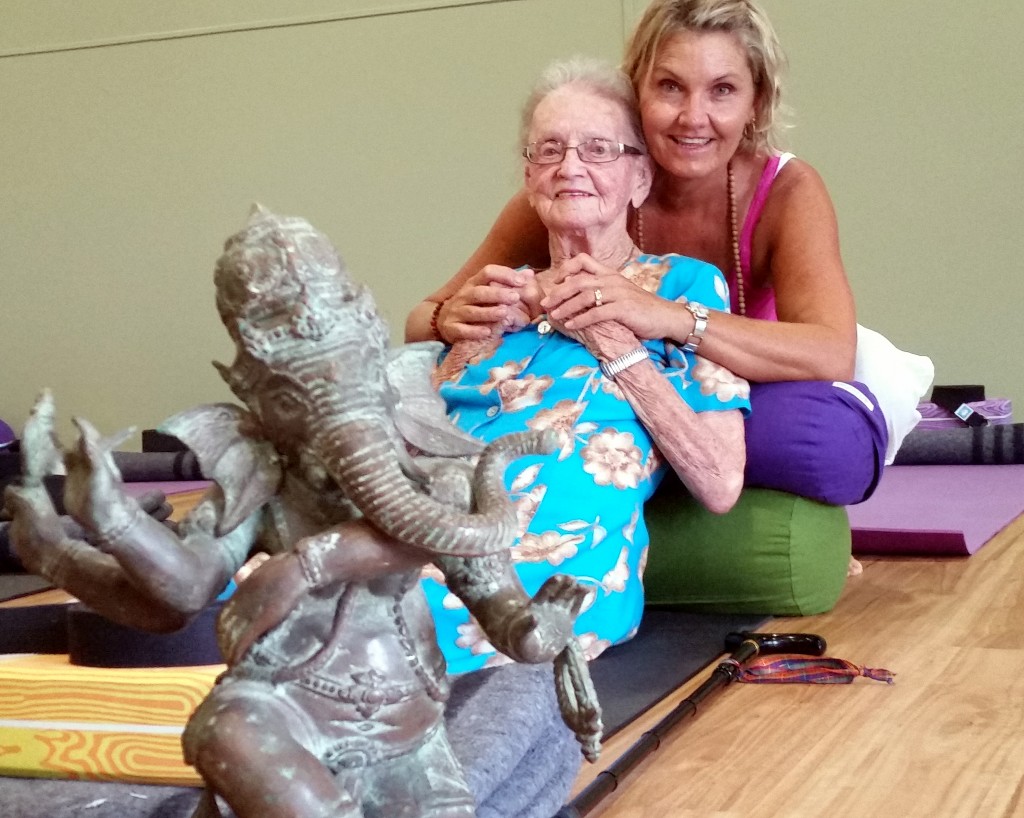 Molly and Jenny with Ganesha, the Hindu God of wisdom, knowledge and new beginnings.

There’s even a new elephant guarding the premises – Ganesha, the Hindu God of wisdom, knowledge and new beginnings.

And Molly couldn’t be happier, knowing that her beloved shop – built from the ground up by herself and her late husband Arthur in 1964 – is now in safe hands.

“Jenny is a lovely person, and I hope she does well. I know she will, and what she’s done to the old shop is amazing.

“I’m not sure whether I’ll book in for classes, though – that’s debatable,” she laughed.

Molly’s premises boomed in the 1960s, 70s and 80s when east Moree, in particular Gosport Street, was a hive of commercial and retail activity.

Wholesaler Wright Heaton was right next door, the railway station and goods depot across the road employed scores of workers, and in the early 1970s, Billy and Gilda Anderson established a newsagent on the southern side of Molly’s shop.

Molly’s husband Arthur – better known as “Shivery” – ran the barber-shop a couple of doors up, Lillyman’s cordial factory was at its peak and hundreds of visitors soaked up the artesian waters at the Moree Bore Baths just around the corner.

The railway tennis courts, of which Molly was a huge part, drew hundreds of players from across the district week in, week out. The courts have since been cleared to make way for Moree’s new bypass but Molly’s huge contribution to the local tennis circuit still lives on – the refurbished Endeavour Lane courts have been named in her honour.

“The 1970s were probably the best years, because of the railway and goods shed right across the road,” Molly said.

“Arthur started a barber shop next door to the Vic in 1954 and then we built these premises in 1964.

“The barber shop was supposed to move in to the little shop (adjacent to the main retail area) but Arthur decided he wanted to go next door – closer to the Vic,” she laughed.

Molly also held a hawker’s license, and once the shop was closed after Saturday morning trade, she’d load up her Austin A40 and hit the dirt roads and side-tracks across the region.

“My dad would come with me and we’d go to places like Gravesend and Pallamallawa, but mainly Gurley because all the railway workers were living and working there,” she said.

Jenny has been teaching yoga in Moree since early 2014, turning a passion into a career. She said six classes per week will be conducted from the new premises, and during the in-between times the space will be available for other wellness functions.

“It will primarily be a yoga studio but will also be available for others to hire the space for any sort of wellness functions. This could be a paleo workshop – that’s why we kept the kitchen going – or meditation classes,” Jenny said.

“The response has been amazing from the start and I’ve already got a couple of bookings for yoga workshops.

“I’ve been teaching yoga for two years now in different locations, and class sizes can vary from anywhere between two to 26 people per session,” she said.

“I’ll be doing six sessions per week, and one of those will be pre-natal, which means I’m off to do some training in a couple of weeks so I can do a specific pre-natal class.

“I do have pregnant women coming to my classes and I’ve done a workshop, but more training will give me more knowledge and more confidence.” 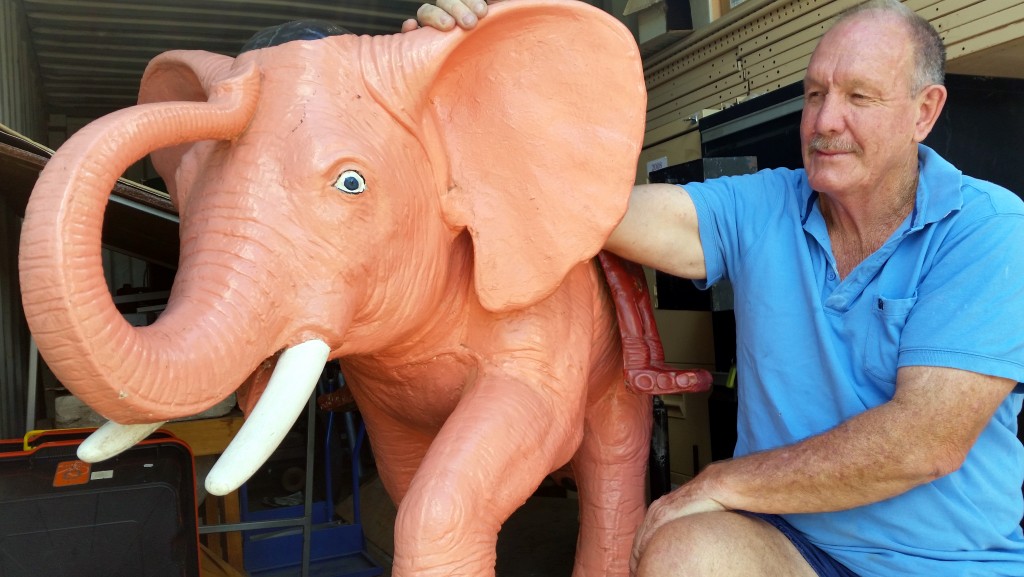 The iconic kids’ ride – that 10-cents’ investment seemed to go on forever – has been gifted to the Moree and District Historical Society.

Society president Stephen Ritchie said the elephant was an important piece of Moree’s history – there wouldn’t be too many residents who haven’t been on it at least once during childhood.

“We are very pleased that Molly has donated such an iconic piece of local history to our organisation,” Stephen said.

“I’m guessing that it’s been at Molly’s shop since the early 1970s and it will be one of our main exhibits when we eventually get a history museum up and running in Moree,” he said.