A MINISTERIAL Order that protects motorists with non-compliant bull bars from being fined and prosecuted has been extended for another 12 months, Northern Tablelands MP and parliamentary Secretary for Northern NSW Adam Marshall announced today.

The original two-year order was put in place during September 2014 following uncertainty over the Australian Design Rules applicable to bull bars after a compliance campaign by the NSW Police. 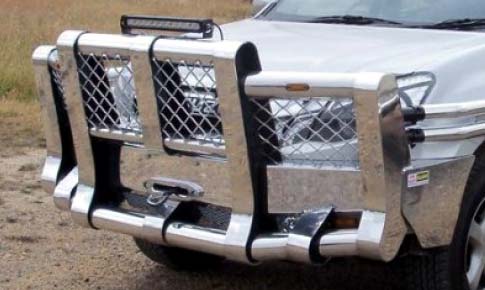 “This order continues to provide clear guidelines detailing the types of bull bars allowed on vehicles on NSW roads to address the controversial issue of ‘non-compliance’ in the Northern Tablelands,” he said.

“It will ensure that motorists who may have inadvertently purchased non-compliant bull bars are not unfairly targeted or fined.

“In the past, motorists in our region have been subject to a compliance campaign and non-one wants to see a return to that situation.

“Certain bull bars have been entangled in Australian Design Rules for vehicle frontal protection systems which were enacted by regulation on 1 January 2003.

“I am very pleased Duncan Gay has listened to the concerns and frustrations of communities in the bush and extended the order until more sensible rules can be implemented.”

Mr Marshall said the Ministerial Order provided breathing space and time to rectify issues with some bull bars, but those that are considered dangerous can still be deemed not roadworthy by compliance officers.

“The Order provides some tolerance for people who have inadvertently purchased a non-complying bull bar, and manufacturers, while the standards are reviewed by the NSW Vehicle Standards Working Group.

“This will ensure that key areas of the bull bar’s design consider safety such as having minimum ground clearance, forward vision, and that lights, indicators and number plates remain visible.

“It’s all about making sure dangerous bull bars are removed from our roads without punishing people who have unknowingly purchased variations that don’t pose an unacceptable road safety risk.”

Mr Marshall is urging local motorists and manufacturers to visit the Centre for Road Safety website to view the tolerances for bull bars.

Information about which bull bars are allowed on NSW roads is available at www.roadsafety.transport.nsw.gov.au/stayingsafe/vehiclesafety/bull-bars.html