MEMBER for Northern Tablelands Adam Marshall has proudly lauded Inverell’s upcoming inaugural ‘Cod Cash’ event on the floor of Parliament, delivering a rousing invitation to the world’s anglers to drop in a line at Copeton Dam for their chance at $25,000 in cash prizes.

In the Private Member’s Statement on last night in the Legislative Assembly, Mr Marshall said he was ‘thrilled’ at the prospects for the world-first event, which is expected to bring more than a thousand visitors to the Inverell area.

“Already interest has been expressed by people from Tasmania, Western Australia and overseas,” Mr Marshall said. 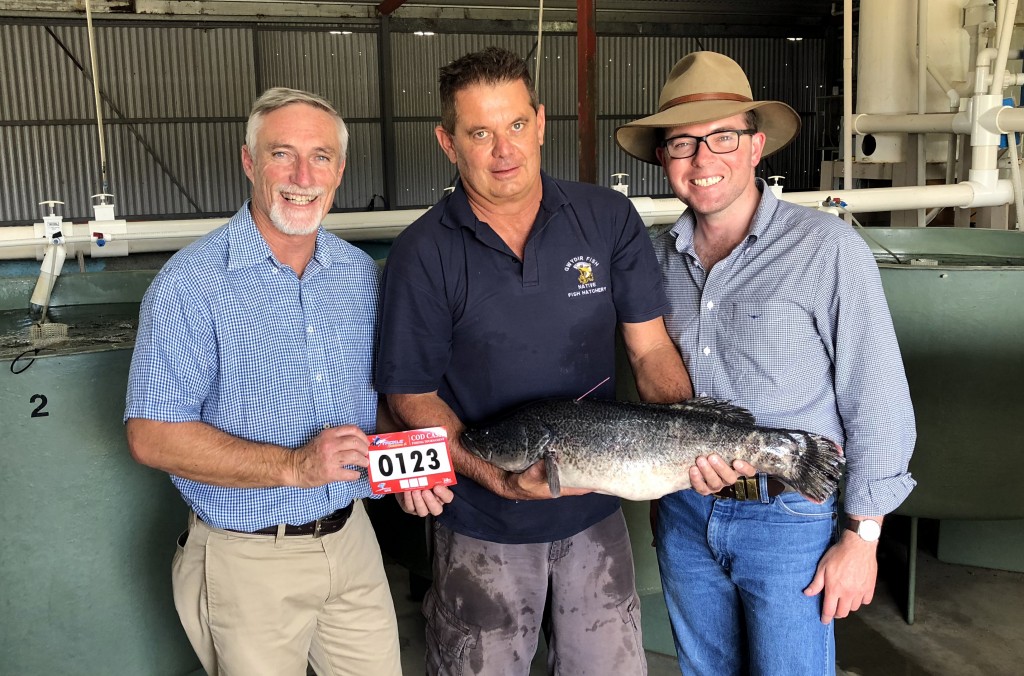 Inverell Shire Mayor Paul Harmon, Gwydir Hatchery’s Peter Randall and Northern Tablelands MP Adam Marshall with one of the tagged Murray Cod anglers will be hoping to catch next month.

“Over the nine days of the competition, anglers will be trying to catch an undisclosed number of tagged cod that will be released into the beautiful waters of Copeton Dam.”

Each tagged fish will offer a significant sum of prize money, with one lucky angler to bag a Murray Cod worth a princely $20,000.

Mr Marshall told his parliamentary colleagues that the competition, supported by Inverell Shire Council and MO Tackle and Outdoors of Inverell, would build the prestige of  the ‘renowned’ Copeton Dam and make a splash in the local economy.

“It is the only place in Australia where anglers can legally catch and take Murray cod from the water all year round,” Mr Marshall said. “Because of that, Copeton Dam is an absolute tourist mecca.”

“When anglers and fishers travel to the State’s wonderful inland waterways, they spend money on fuel for their cars and boats, food, and camping materials.

“When they are in the beautiful sapphire city of Inverell or the delightful Bingara, which is near Copeton Dam, they will shop and spend their money.”

Cod Cash will be held between the 14th and 22nd of April and also offers a $500 prize for the best photo taken at the event.

Mr Marshall said he would love to see the event become an annual fixture.

“Come one, come all, I invite all anglers to Copeton Dam. They will not be disappointed. Even people like me can catch a tagged Murray cod and they will too.”

Volunteers show how a load of rubbish makes a big difference

Next post
Crooble Hall rafters set to shake, rattle and roll for My Golden Triangle