A $17,700 grant from the State Government will give a community garden at Glen Innes a more user-friendly layout and design and allow more people with mobility issues to get into and around the greenery.

The Glen Initiative Garden, a real grassroots idea from Glen Industries, first planted out 18 months ago, is spreading its roots – to give more people, and particularly those with mobility aids, better and easier access to gardening.

Announcing the funding today, Northern Tablelands MP Adam Marshall said it would help add to the appeal of the garden but importantly get more green thumbs involved from all different age groups and community sectors and help produce more fresh produce for an expanding and enthusiastic local market. 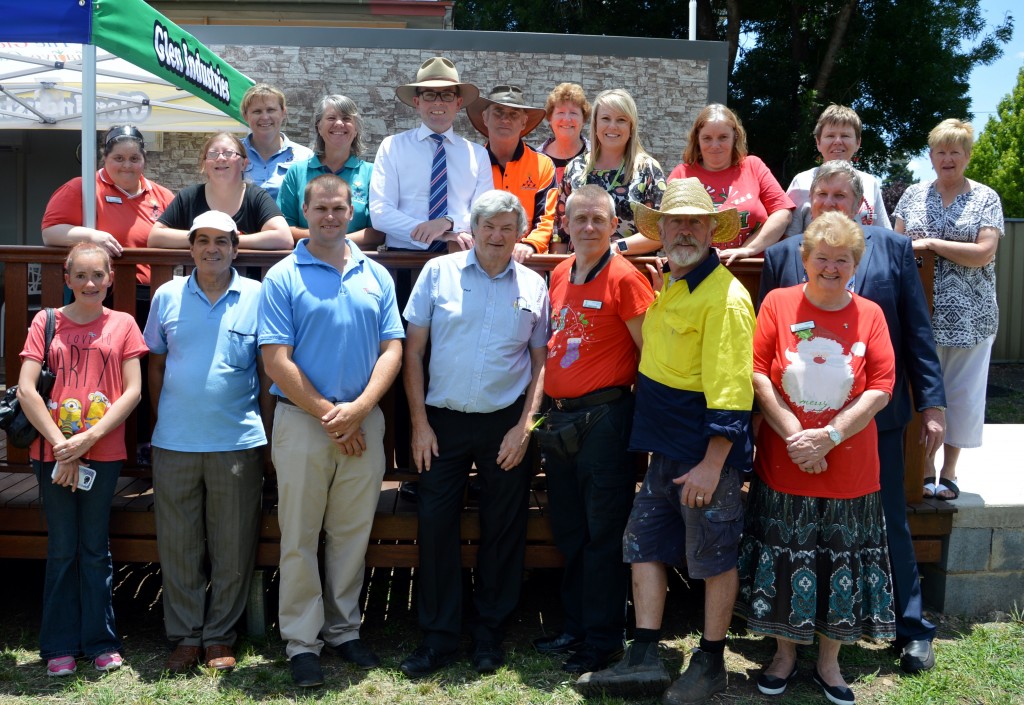 Northern Tablelands MP Adam Marshall and Glen Industries manager Kylie Hawkins with some of the Glen Industries employees who will benefit from a $17,748 grant to upgrade their community garden.

Glen Industries manager Kylie Hawkins has described a state government grant to help them seal the entrance and make a garden gateway, construct pathways and incorporate a courtyard into the community garden as a ‘phenomenal’ win for the organisation and its clients and supporters.

“If we can add these features, then we have the ability to open it to the general public by putting some all-weather surfacing down and adding the courtyard and make it more accessible for those with mobility aids, like wheelie walkers or wheelchairs,” Ms  Hawkins said.

“We want to put in some meandering pathways and do some work to the feature garden areas so that it’s not a concrete jungle but a community garden that more people can use.

“It would just allow us to do some design features to make it more interesting, aesthetically appealing and beautiful.”

Mr Marshall said the produce from the garden was already provided weekly in batches to more than 100 people – as well as with some banana bread also baked on the Church St site but extending the tennis-sized garden area would do even more.

“It’s the true essence of a garden, there’s also a bush tucker section that has assistance from schools and the indigenous community so people are making a valid contribution to something that is more than just a one-dimensional operation,” Mr Marshall said.

“Besides growing things like capsicums, tomatoes, lettuce, silverbeet, spinach and leeks at the moment, it’s an idea that is also invigorating community spirit and bringing more people in touch with each other, not just through those helping grow fresh produce, but also in connecting with each other through the social interaction of giving.”

Mr Marshall said Glen Industries had been established 50 years ago and ever since had been supporting social and vocational needs for people with a disability. Over that time it had established strong commercial revenue streams to support its social objectives. With an upgraded garden it could be safely opened to more people outside the volunteer, student and unemployed gardeners who helped put the weekly packages together.