Magic on the Mehi set to redefine entertainment in Moree

MAGIC on the Mehi.

Say these four little words slowly and then commit them to memory, because if Moree-born-and-bred funnyman Murray Hartin gets his way, this simple yet catchy phrase will be firmly etched in Moree’s cultural and entertainment history for years to come.

And the first edition of what is hoped to be many is set to transform the banks of the Mehi River down Gwydirfield way into a mirthful mecca of well-organised madness – Murray Hartin-style. 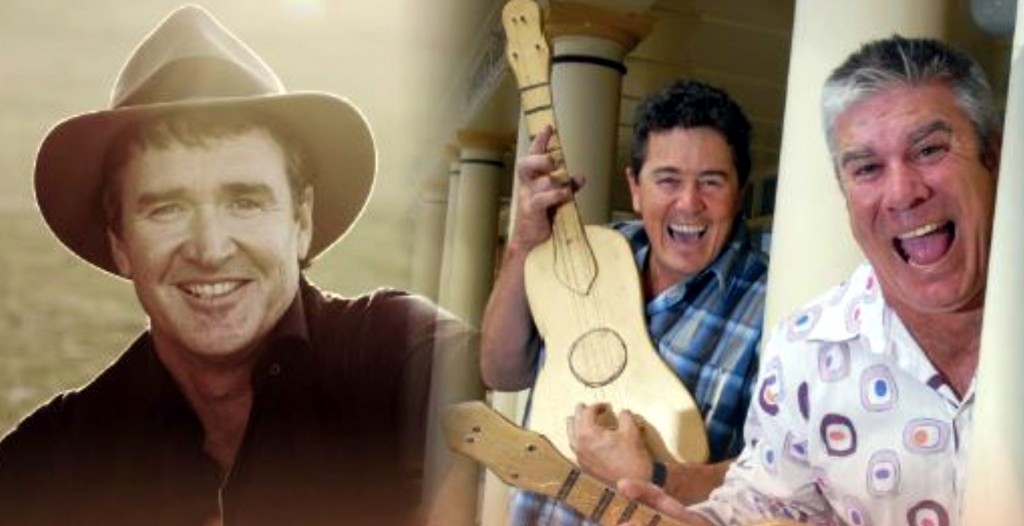 Luke O’Shea, Marco Gliori and, of course, Murray ‘Muz’ Hartin headline the three-day Magic on the Mehi festival on September 9-10-11.

Hartin, or ‘Muz’ as he prefers to be called, is one of Moree’s most famous exports, and the town is now so much better off that he has returned home to his old stamping ground.

He’s back to where it all began in a roundabout sort of way, and he loves Moree so much that he’s decided to give a whole lot back to the town that helped shape his career.

“Magic on the Mehi will be a mixture of great yarns, great music and a little bit of bocce . . . now, if you don’t know what bocce is, don’t panic – it’s bit like bowls but you play the game in sand,” Muz grinned.

The venue is the banks of the Mehi River on the property Wandoona on the Gwydirfield Road, just three kilometres from Moree – a stone’s throw from the new bypass.

“There will be plenty of food, including giant paellas, pizzas and a sausage sizzle, and a bar will operate from 6pm until 9.30pm on Friday and Saturday with both nights wrapping up by 10pm,” Muz said. 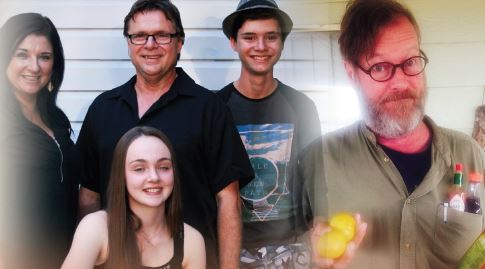 Luke Butler and Lousy Jack, as well as funnyman Al Glover, will be centre-stage at Magic on the Mehi on September 9-10-11.

There will be kids’ poetry competitions for under-8s, 9-12 years and 13 years and over from 12-noon on Saturday then from 6.30pm Muz and Marco, Al Glover, Lousy Jack and Luke O’Shea take to the stage.

“There will be prizes for the kids but it’s all about putting them up there on the stage – and if any of their musical mates want to belt out a tune they will be more than welcome,” Muz said.

“Sunday morning will be a very casual three-hour poets’ breakfast.

“We’ll kick off at 9am with yarns, music, comedy and some of the kids will be invited back for an encore performance,” he said.

Tourism Moree CEO Tammy Elbourne said Wandoona will be “the place to be” on September 9-10-11.

“The Tourism Moree team is very excited to be working with Murray in promoting this wonderful event,” Ms Elbourne said.

“There will be something for everyone from bush poetry to comedy and music, sausage sizzles, camp oven demos and a billy-boiling competition.

“The giant paellas are sure to be huge hit – and don’t forget to bring the kids along as there will be music and kids’ poetry,” she said.

Tourism Moree provides marketing support and promotional assistance for many local events and Ms Elbourne said her award-winning team is “very proud to be associated with, and supporting Magic on the Mehi”. 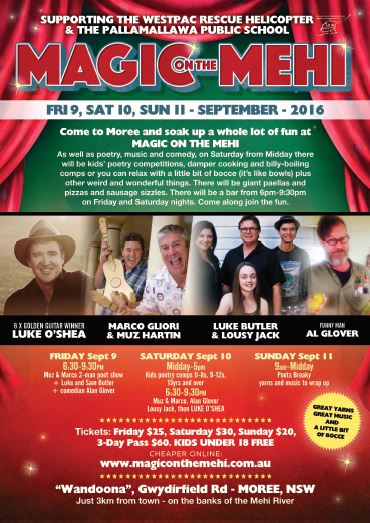 “We assist the organising committee by ensuring that we can communicate and provide an effective marketing tool for all our local events, and by doing this we are assisting with raising the profile of the Moree Plains in a professional and positive light,” Ms Elbourne said.

“An event like Magic on the Mehi has the potential to increase visitation to the Moree Plains Shire and become a source of pride for our local community each year.

“We believe that this event has the potential to not only enhance our current events’ calendar and tourism products, but it will bring a new and exciting experience to our tourism portfolio,” she said.

Entry costs to Magic on the Mehi are $25 for Friday night, $30 for all day Saturday and $20 for the Sunday breakfast.

A three-day pass is a steal at just $60 and all prices will be a bit cheaper if purchased online prior to the event. There is no charge for kids under 18 years of age.

Cheaper online ticket purchases can be made by going to www.magiconthemehi.com.au