Lights now flashing at every school in the Northern Tablelands

STATE MP Adam Marshall has announced a huge boost in protecting children on roads around schools saying that as of today all 93 Northern Tablelands schools now have a set of flashing lights to alert motorists in their school zones. 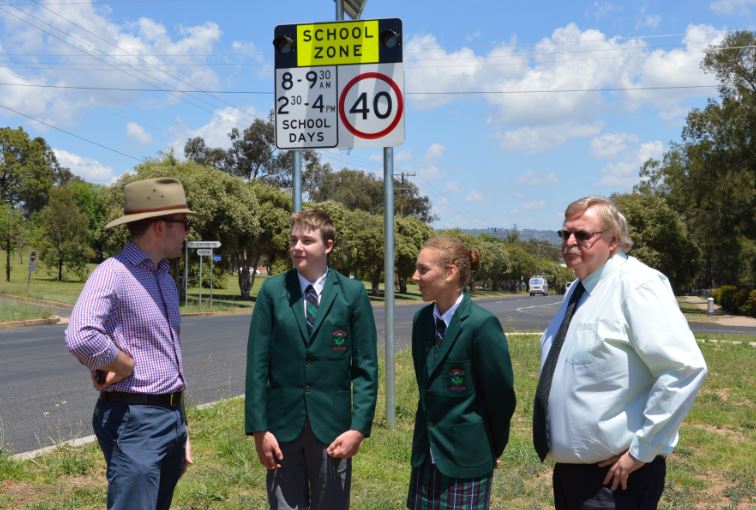 Mr Marshall visited Inverell’s Macintyre High School today with Principal Lindsay Paul and student leaders to make the announcement after flashing lights were installed at the final few schools across the electorate earlier this month.

“Children are some of our most vulnerable road users and we know that flashing lights slow motorists down around schools and help prevent accidents,” Mr Marshall said.

“That’s why I’m very pleased to say that all 93 schools – public, catholic and independent – now have flashing lights installed to help keep their students safe and warn motorists of active school zones

“Over the last 12 months crews have been working hard in our local area delivering flashing lights to every school with Roads and Maritime Services (RMS) consulting with schools to ensure the flashing lights were installed in the most appropriate locations.”

Mr Marshall said that since July last year, the state government had ramped up its flashing lights rollout, completing more than 100 schools per month across the state, so that by the end of this year every school across NSW will have a set.

“The Northern Tablelands is one of the first rural electorate to have all its flashing lights rolled out, which is good news for students and parents,” he said.

“In June this year the government announced a record spend in road safety, which included an extra $2 million this financial year as part of a $10 million package, to boost safety around schools by improving infrastructure like zebra crossings and rolling out additional flashing lights to schools with multiple busy entrances.

“It’s all part of a commitment to put a safety cone around our schools and improve school road safety in every way.”

Mr Marshall said a number of schools across the electorate with multiple intersections and student entry points had successfully applied for extra sets of flashing lights. He said the installation of these additional lights would begin shortly.

Flashing lights remind motorists of the 40km/h speed limit, which applies from 8am to 9.30am and 2.30pm to 4pm on gazetted school days.