THE Federal and New South Wales Governments have today signed a landmark Bilateral Agreement, which makes way for the commencement of works on the multi-billion dollar Inland Rail project in NSW.

NSW is the second state to sign up to the nationally-significant project. 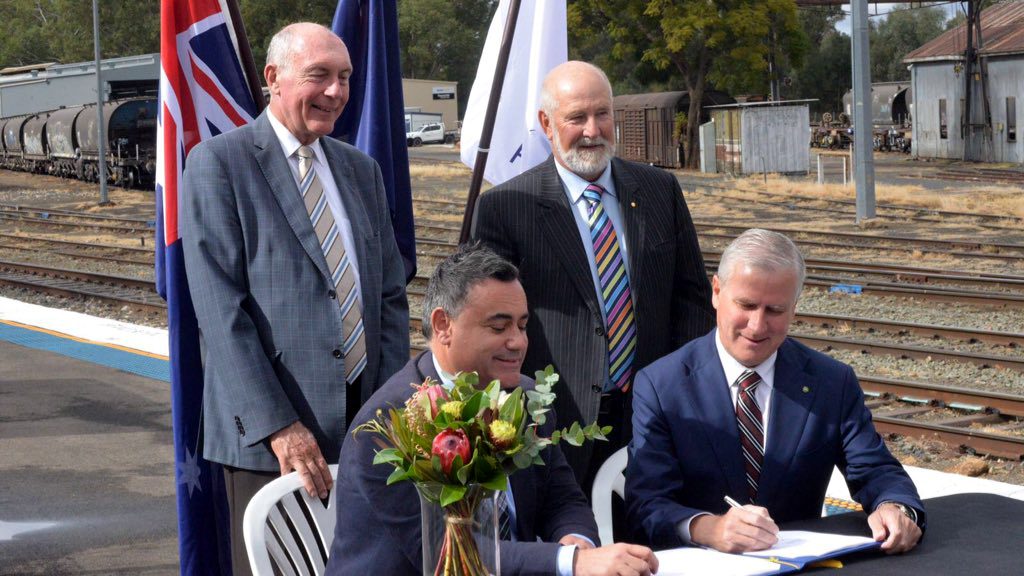 Deputy Prime Minister and Minister for Infrastructure and Transport Michael McCormack said the signing of the Bilateral Agreement was a landmark moment in the delivery of the project.

“Inland Rail will be a corridor of commerce for communities along the eastern seaboard and today’s agreement in Parkes is another vital step in making its vision a reality,” Mr McCormack said.

“Locals know how exciting this project is and – as a local MP – I know how Inland Rail will create local jobs and investment opportunities throughout the regions, as well as dealing with Australia’s future freight challenges well into the next century.”

Meanwhile, local residents will have the opportunity to shape the Melbourne to Brisbane Inland Rail with nominations now open for Community Consultative Committees in New South Wales.

The committees will cover the Narromine to Narrabri and North Star to NSW and Queensland Border projects, two greenfield sections of the 1700km project which pass through NSW.

Mr McCormack said the establishment of the committees by the Australian Rail Track Corporation (ARTC) is another important step for the nationally-significant project.

“The Federal Government is committed to delivering Inland Rail. Strong working relationships between ARTC, local community, stakeholder groups and Councils are critical to the success of this project,” Mr McCormack said.

Assistant Minister for Trade, Tourism and Investment and Federal Member for Parkes Mark Coulton said the committees will be a channel for direct feedback and information sharing between landholders, local businesses and residents and the ARTC.

“The four committees, each with an independent chair, will give members the opportunity to provide valuable input that will be crucial to the design of Inland Rail,” Mr Coulton said.

“Regular and ongoing input is both vital and welcome as ARTC moves through the environmental assessments process involving extensive studies and engineering work. The committees will focus on local issues, ensuring we deliver a refined solution that supports local farmers and businesses.”

Interested community members are encouraged to nominate with more information about the committees available at www.inlandrail.com.au.

Archibald Prize finalist to exhibit at The Moree Gallery

Next post
Ed shearin’ locked in for Garah fundraiser