AFTER spending eight years out of the saddle raising a young family and overcoming a series of track falls, injuries and just plain old bad luck, jockey Kath Bell-Pitomac is back where she belongs – at the racetrack on race-day booting home winners.

Bell-Pitomac has been to hell and back during the past two or three years.

The mental anguish and physical injury she suffered would have made a lesser person give up, but she fought the big fight and emerged a winner.

“I struggled mentally and there were quite a few people not wanting me to go back riding,” she said. “But I also had awesome support. My two physios were great – both helping me physically and mentally – and there were a few great racing people who kept calling to check up on me.”

Bell-Pitomac had planned a riding comeback in late 2014. Her young family was growing up and she figured it was time to go back to work, but a trackwork tumble just days before her first meeting resulted in three fractured vertebrae.

“I did everything doctors told me to do and had my first rides at the picnics eight weeks later at Geurie,” Bell-Pitomac said.

“I rode the Golden Triangle up Moree way that year as well and had a lot of luck, and I was especially lucky enough to ride Dungiven for Peter Sinclair.”

After a third on Dungiven in the 2015 Boolooroo Cup at Moree, Bell-Pitomac partnered the gelding to wins in the Mallawa and Wean Cups.

But just as trainers were starting to sit up and take notice of Bell-Pitomac’s ability, an accident two months after Wean kept her sidelined for the rest of the year.

“I injured my shoulder and thumb but I made it back to ride at Orange and Geurie,” she said.

The comeback was short-lived however, and Bell-Pitomac was again put on the bench after a freak accident in February last year.

“A horse reared up and the stirrup slipped off the saddle,” she said.

“I remember hopping off to fix it and then the horse must have reared again and came over on top of me.”

Bell-Pitomac spent a week in hospital with internal injuries, torn muscles and a haematoma across her lower back. 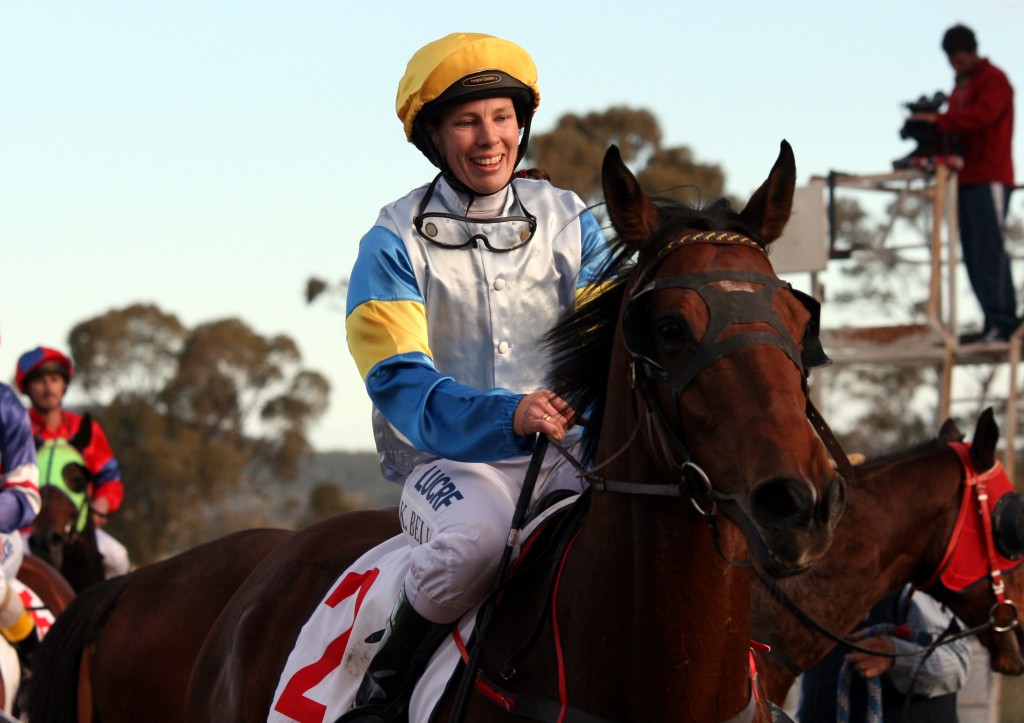 And her luck didn’t change there, either.

While she was recovering in hospital, her then-fiance and now-husband Daniel Pitomac came down in a race-fall at Coonabarabran.

Pitomac broke his foot in three places and suffered bruising to his head and hip.

“It happened four weeks before our wedding. We did manage to get married without any crutches, but the wedding dance was a bit slow,” Bell-Pitomac laughed.

Meanwhile, Bell-Pitomac was told that her time away from the track could be anywhere from six weeks to six months.

She aimed for a comeback at last year’s Golden Triangle but things again turned pear-shaped.

“I improved to a point really quickly and was aiming for Moree but then things went backwards,” she said.

“I was sent to a specialist who found I had damaged my sacroiliac joint, but that had been missed in the first scans. All the work I had been doing to get stronger was making it worse.”

Bell-Pitomac was back to square one, and a return to Moree to rekindle old ties with Dungiven was shelved.

After a few more months out of the saddle, Bell-Pitomac returned with a winning double at Gosford picnics on Melbourne Cup day last year.

“Riding a double was great but regardless of the result, it was just awesome to be back,” she said.

“I’ve ridden at every picnic meeting since, and loving it.”

Bell-Pitomac has already made her mark at this year’s Golden Triangle.

She rode a cheeky race out in front to win the Moree Bracelet on Wayne Martyn’s Secret City and saluted at Mallawa on Bryan Dixon’s Noceur.

“I was so disappointed that I didn’t heal in time for the Golden Triangle last year, so I’m stoked to be back for it now,” she said.

Bell-Pitomac hopes for a full book at round three of the Triangle at Garah on Saturday and has been booked to ride bush racing’s ugly duckling Cool Rules in the Talmoi Bracelet.

Cool Rules is no stranger to injury and misfortune either, and makes his long-awaited return after overcoming anhidrosis, an illness that takes away a horse’s ability to sweat.

“It sounds like Cool Rules is as accident-prone as me so we’ll make a good pair,” Bell-Pitomac laughed.

“Hopefully both of us have finished our runs of bad luck and ill-health and can come out in front – fingers, toes and everything else crossed,” she beamed.