Josh McGregor: “Regulation gives a single, quality carrier the confidence to maintain and invest in the route – it’s madness to endanger that”

MOREE businessman Josh McGregor three years ago led a lobby group that fought successfully to get Qantaslink back in Moree after the town was left without a carrier to service the Moree-Sydney air route.

And now the battle is back on – and again Mr McGregor is leading the push to abandon a plan to deregulate the route.

Transport for NSW caught Moree residents unaware two weeks ago with an announcement that deregulation of the Moree-Sydney air service was back on the table and open for discussion.

The department claims deregulation will open up the airways across the black-soil plains, with NSW Minister for Transport and Infrastructure Andrew Constance saying competition between carriers will make airfares more affordable.

Moree Plains Shire Council has been quick to act as well, with councillors last week voting unanimously to fight the proposal.

Also at the coalface is Mr McGregor, who leads a concerned group of Moree Shire residents vehemently opposed to the concept. 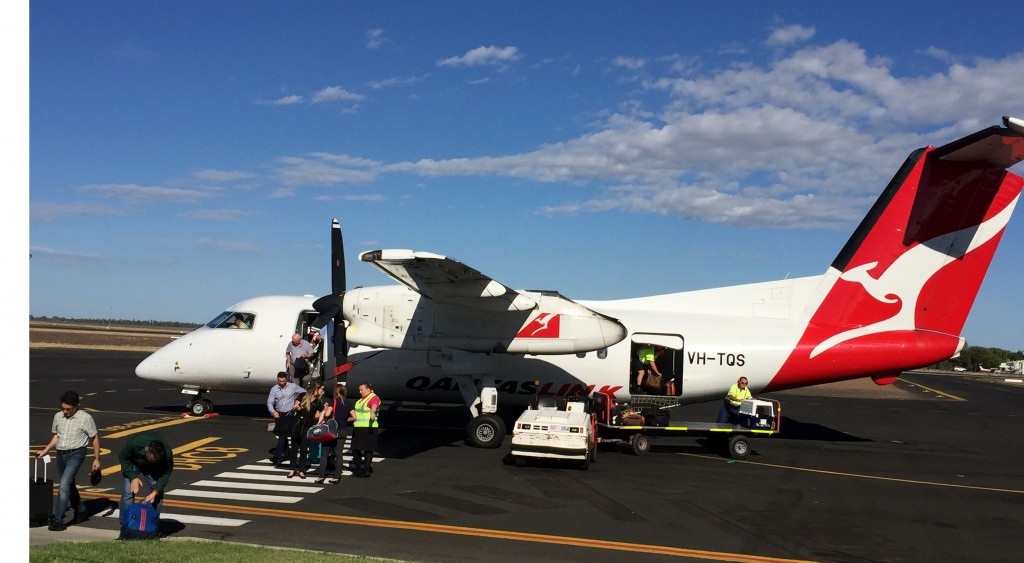 Passengers disembark from a QantasLink flight at Moree on Monday morning (Image Supplied).

Mr McGregor, general manager of the McGregor Gourlay Group, says deregulation does not necessarily mean that a large carrier will run flights alongside QantasLink – or that flights will be cheaper.

“If we get deregulation it’s very doubtful that we would suddenly have a large airline such as Regional Express (REX) or Virgin trying to run a second service,” Mr McGregor said.

“What we would likely get is one or more small carriers running a budget service once a day, around the middle of the day when slots at Sydney are cheaper and more available.

“This might see enough numbers peel off the QantasLink flights that they (QantasLink) start to reduce services, and eventually abandon the route.

“Nobody ends up any better off. We simply end up with a less well-resourced airline flying less suitable aircraft with less Sydney slots. Budget airlines will then put prices up to what they can get,” he said.

There is also a growing fear that Moree could lose the service completely, however Mr McGregor doesn’t see this happening.

“I don’t think we will end up with no airline if we are deregulated, as the numbers are just decent enough for someone to try and make it work,” Mr McGregor said.

“But what will likely happen is that we will end up with something inferior to the great service we now have.

“Regulation gives a single, quality carrier the confidence to maintain and invest in the route – it’s madness to endanger that,” he said.

The Moree-Sydney route consistently carries around 30,000 to 35,000 passengers annually, primarily for business purposes, district services including health, as well as tourism around significant events.

“Qantas put on a third daily flight a few days a week, so numbers must be consistent and sound enough for them to make it work financially,” Mr McGregor said.

“They have had the flexibility and resources to put on larger 50-seat aircraft when periods of high demand occur, such as large weekend events.”

Also in the mix are consumers claiming that current airfares are far too expensive. They are seeking more affordable airfares, with the belief that deregulation will bring prices down.

“Moree is not really any dearer to fly than other major deregulated regional routes,” Mr McGregor said.

“If flights are booked a month or more ahead, they are cheap. If a Friday evening flight is booked just the day before, it’s expensive – it’s the same as everywhere else.”

Nicola Dillion is just one Moree Shire resident to vent her anger in writing to Transport and Infrastructure minister Andrew Constance.

“I strongly feel that we need to have a regulated route, with a regular and fixed timetable and an airline that has an excellent safety record and on-time services. We have this with QantasLink, so why change something that works, and is so good and reliable, and a well-known brand.

“The current service has passengers coming from as far away as Walgett, Goondiwindi, Narrabri and Inverell as those areas do not have air services.

“Our current service is reliable and, with 14 flights per week, it gives the flexibility to travel to Sydney whether it is for a day on business, a medical appointment, just for the weekend or to connect to other Qantas flights within Australia and around the world,” Mrs Dillon said.

The story so far:

Adam Marshall: “I stand with the community and MPSC to maintain the regulated route and will make every effort to ensure this occurs”