Johnstone family the hidden force behind Magic on the Mehi

MURRAY Hartin makes no bones about it when asked about the how, why and wherefore of the inaugural Magic on the Mehi music and poetry festival he co-ordinated earlier this month.

The well-known bush poet, one of Moree’s most famous exports who last year returned to his old stomping ground out Gwydirfield way, knows with absolute clarity that if it wasn’t for the Johnstone family – of Johnstone’s Concrete and Quarry fame – Magic on the Mehi just would simply not have happened.

That is just a basic fact of life, says Murray. 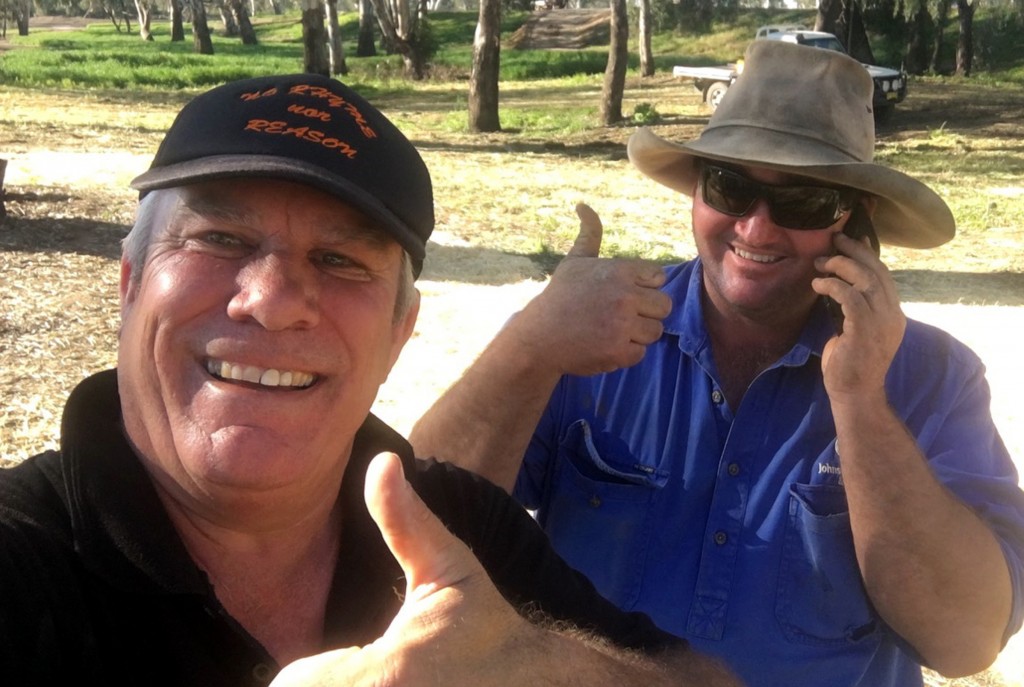 Murray Hartin and Mitch Johnstone give Magic on the Mehi the thumbs up.

And he’s eternally grateful that the Johnstone clan came on board to not only help create Magic on the Mehi, but to supply a full-blown, picturesque venue for the three-day event.

“The Johnstones are an incredible family, who always dig in for their town or village, or the collective community, and ask for nothing back,” Murray said.

“Magic on the Mehi doesn’t happen without the Johnstone Family – pure and simple.”

The connection between Murray and the Johnstones came about through Murray’s cousin Mitch Cosh, who works for Johnstone Concrete and Quarry.

“We were having a beer and talking about what plans I had and they took me down the road to have a look at Wandoona,” Murray said.

Wandoona, about three kilometres from Moree on the Gwydirfield road, is leased by Johnstone Concrete and Quarry from Moree businessman Danny Bourke.

“I said ‘Geez, you could have a festival here’, and that’s how it all started. It was a huge leap of faith from Mitch Johnstone in that I’ve never staged a festival before.

“It was a bit like the blind leading the blind but somehow we stumbled through and we got there,” he said.

The team from Johnstone Concrete and Quarry then hooked in. They prepare the site, which is nestled on the banks of the Mehi River, built access roads and gates, obtained a flat-bed semi-trailer from local trucking company Woods Transport to use as the main stage, built the men’s toilet wall, slashed oats, erected marquees, dug trenches, chipped in with the clean-up each morning and helped dismantle the whole shebang when the festival was over.

“The list goes on and on, and a lot of work was done in the office through Bree Pring and Mel Boland as well,” Murray said.

“So much time was given by the Johnstones and JCQ that it would be impossible to put a value on it.

“As I said, without the Johnstones, Magic on the Mehi doesn’t happen.”

Murray says the festival will definitely go ahead next year, and again the banks of the Mehi at Wandoona will be used as the perfect backdrop.

“The venue was unbelievable and won’t change,” he said.

“We do have the ability to accommodate for bigger crowds at Wandoona just by moving the site a couple of hundred metres if required.

“But the setting on the Mehi, in a slashed paddock of oats, was brilliant,” he said.

There was also a shuttle-bus service, donated by Reynolds Fogarty, ferrying people to and from the festival.

“The numbers were a bit light on Friday night because of the weather but the bus service very much appreciated on Saturday night. Greg Reynolds and Wayne Fogarty were extremely generous in donating the coach and drivers,” Murray said.

Next year’s Magic on the Mehi – slotted in for September 8-9-10 – will be bigger and better, Murray says.

“The greatest thing we have on our side for next year is time – time, plus we have a little bit of experience under our belts now,” he said.

“We will be bringing back Luke O’Shea to what will be a much bigger crowd – everybody loved Luke as he is a great story-teller, singer-songwriter and musician.

“We will also get a few more local musicians and artists involved, and will fill the last hour of each night with local acts doing a lot of dance-along, singalong covers.

“We also want to get more children involved on Saturday afternoon, so I will be liaising with schools in that area.

“But we won’t be changing anything too much. It all worked pretty well the first time, so next year we’ll just add a few things here and there and maybe rearrange some times,” Murray said.

Magic on the Mehi was well supported by a long list of sponsors and volunteers, including a $2750 grant from Moree Plains Shire Council.

“The Moree community is incredibly generous and we could not have pulled it off without everyone’s support . . . Moree is a great town,” Murray said.

Murray and his huge band of helpers send out an equally huge round of applause to the following sponsors and supporters:

“This is a big list. As I said, Moree is a great town and is always supportive of events like Mahgic on the Mehi,” Murray said.

Moree calendar of events for October, 2016