PLANNING for the eagerly-anticipated redevelopment of Inverell District Hospital has begun, following a visit to the hospital this morning by Parliamentary Secretary for Regional and Rural Health Sarah Mitchell and Member for Northern Tablelands Adam Marshall.

The Parliamentary Secretary was invited by Mr Marshall to inspect the hospital, meet with staff and inform the community of timeline for the important upgrade.

With the State Government committing $30 million to the large-scale redevelopment, Mrs Mitchell said that the three-stage planning and business case development process was expected to take approximately 12 to 18 months. 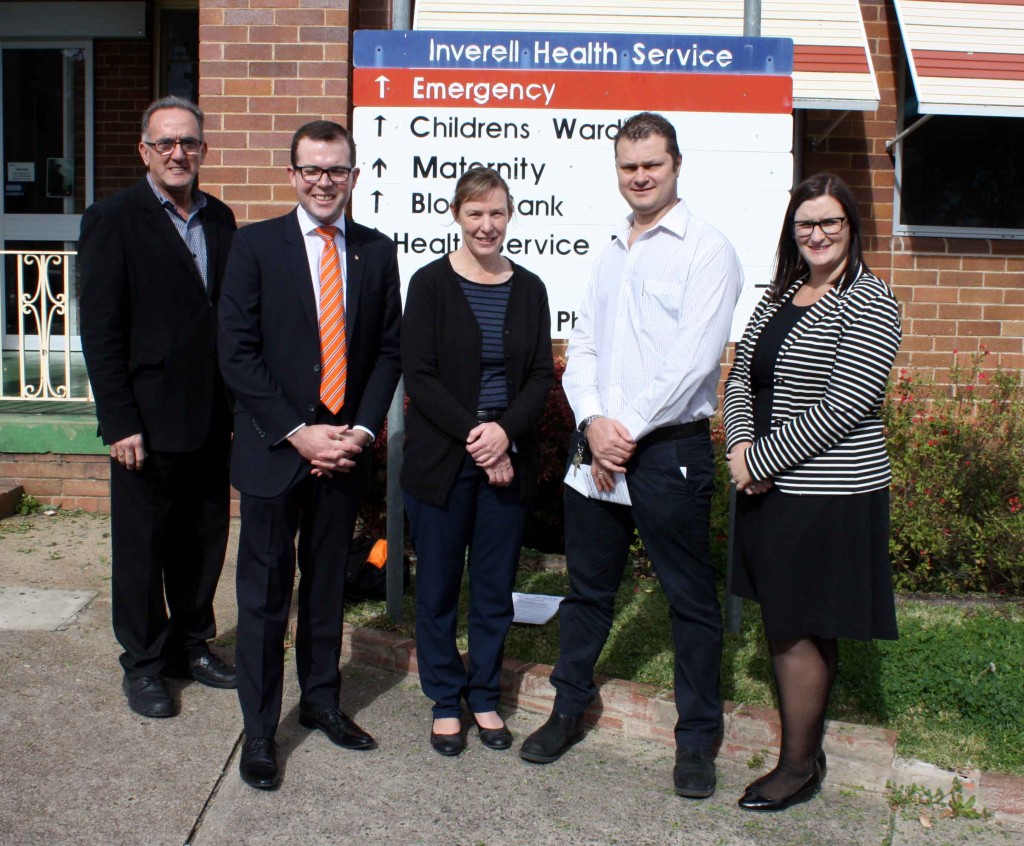 “This includes all the planning up until the final construction tendering document is finalised,” Mrs Mitchell said.

“Once the planning is complete the redevelopment will be ‘shovel ready’ and will then be able receive its funding allocation in the State Budget.”

Hunter New England Area Health Service (HNEAHS) has kicked off the process, developing a Clinical Services Plan for the hospital, which should be completed by early next year.

“With such a significant investment being made by the State Government, it is essential that the extensive redevelopment meets the health needs of the Inverell community for decades to come,” Mrs Mitchell said.

“During the process HNEAHS will consult with health staff, other health service, Inverell Shire Council and key community groups to confirm health service priorities and range of services required by the community now and into the future.”

Mr Marshall said that once the Clinical Services Plan was finalised a project team would be assembled to deliver a Preliminary Business Case.

“It’s essentially a first draft of what kind of services should be included in the redevelopment and what facilities need to be redeveloped or constructed to support them,” he said.

“It’s at that point we will know how far we can stretch the $30 million and what will be built,” Mr Marshall said.

The redevelopment will be overseen by NSW Health Infrastructure in partnership with HNEAHS Capital Works Department. The project team will also include key Inverell Health Services staff and consultants including a project manager, cost manager and architect.

“During this phase of the planning, Inverell health services staff, including doctors, nurses, allied health staff and support staff, will be continually consulted on the proposals for each of the clinical services,” Mr Marshall said.

“Once the Preliminary Business Case is complete and endorsed by NSW Treasury the project team will deliver a final business case for endorsement and readiness to receive construction funding via the annual state budget.

Mr Marshall welcomed the Parliamentary Secretary to Inverell and said the community was excited to learn of the start of planning for a redevelopment long campaigned for.

“The Inverell district’s population is growing and this is placing added demands on the hospital, which is showing the signs of age and a lack of major capital investment over a long period of time,” he said.

“The community has campaigned hard for this redevelopment and I’m really looking forward to seeing the planning progress and ensure the community is involved and kept informed.

“Some of the needs for Inverell hospital have already been identified, such as a new and larger renal dialysis unit, enhancement the hospital’s operating theatres, acute care, maternity and pediatric services, as well as improved inpatient and community health facilities, but this may not be the extent of the works and that’s why the next 12 months of planning is so important.

“This is an exciting time for Inverell and the future of health services in the district.”