This amount of cocaine has an estimated street value of approximately $360 million.

Additionally, 15 men allegedly involved in the Australian criminal syndicate responsible for the attempted importations have been charged with serious drug importation offences. They range in age from 29 to 63 years. 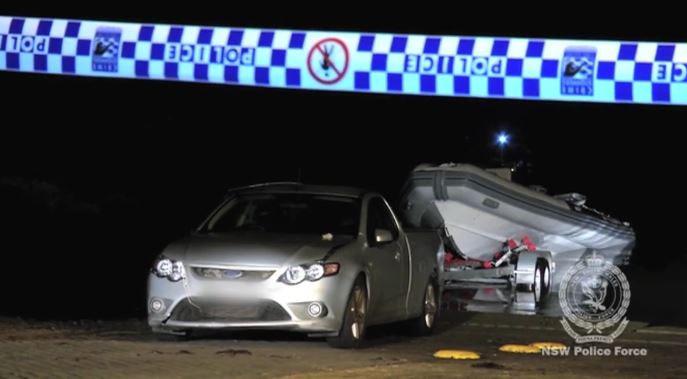 Since that time, detectives have been assisted by tactical, marine, aviation and technical officers from both organisations, and the Australian Border Force (ABF), to identify five alleged conspiracies to import illicit drugs into Australia, which included the December 2014 seizure of 32kg of heroin by authorities in Fiji and the March 2016 seizure of 606kg of cocaine by authorities in Tahiti.

As the investigation progressed, a vessel of interest was identified departing the Sydney Fish Markets on Saturday, 3 December 2016, and later returning to the Central Coast of NSW. The vessel was monitored by Maritime Border Command within the ABF and NSWPF’s Marine Area Command.

On Christmas night (Sunday, 25 December 2016), a small tender was launched from this vessel with one man on-board. With the assistance of the NSWPF Marine Area Command and ABF officers and detector dogs, the AFP monitored the tender’s arrival at Parsley Bay in Brooklyn, NSW. The tender was met by another two males.

At that time, the resolution phase of the operation was initiated. Three men were arrested and approximately 500 kilograms of cocaine seized at Parsley Bay. Further forensic testing will be conducted to determine its exact weight and purity.

Following this, a number of search warrants were executed across Sydney, and a further four men arrested.

Since the operation on Christmas night, a further four men have been arrested in the Sydney suburbs of Zetland, Double Bay, Kingsford, and Greenacre.

All 11 men appeared in Sydney Central Court on Monday, 26 December 2016, and Tuesday, 27 December 2016, each charged with conspiracy to import a commercial quantity of border controlled drugs. Bail was refused for all 11 men.

Both men are expected to appear at Central Local Court today (Thursday, 29 December 2016).

Yesterday, a further two men were arrested in Ulladulla on the South Coast of NSW. Both men appeared in Nowra Local Court yesterday, also charged with conspiracy to import a commercial quantity of border controlled drugs. Bail was refused for both men.

The maximum penalty for conspiracy to import a commercial quantity of border controlled drugs is life imprisonment.

AFP Acting Assistant Commissioner Chris Sheehan, National Manager Organised Crime and Cyber, said the activity conducted in the past week was the culmination of a complex investigation which crossed domestic and international borders.

“This has been a long-running joint investigation, and I want to thank our people and our partners for their tenacity and dedication,” Acting Assistant Commissioner Sheehan said.

“We’ve stopped around a tonne of cocaine and a commercial quantity of heroin from reaching Australian shores. Additionally, we’ve prevented future importations by apprehending 15 men for their alleged involvement in the criminal syndicate responsible for this attempted importation.

“This operation is a clear indication that working together with our law enforcement and border protection partners is imperative in combatting an increasingly complex, transnational criminal environment.”

“The dedication of all officers involved over the course of this investigation needs to be commended – especially those who sacrificed precious time with family and friends to ensure these dangerous drugs didn’t reach the streets,” Assistant Commissioner Jenkins said.

“This job began with a thread of information to the NSWPF’s Drug Squad two-and-a-half years ago. What has followed and the results achieved are a powerful example of the impact made by the hard work and cooperation of the NSW Police Force, Australian Federal Police, and our partners in combating transnational organised crime activities such as drug trafficking.”

“As we improve our capabilities to detect drugs in sea and air cargo, we know they will continue to evolve and employ sophisticated efforts to breach the Australian border,” Acting Assistant Commissioner Fitzgerald said.

“By working closely, with each other and our international partners, Australia’s law enforcement agencies have been able to combat those increasingly sophisticated methodologies.”