FEDERAL Member for Parkes, Mark Coulton remains confident that planning for the iconic Inland Rail project will remain a priority for the Federal Government following meetings he attended in Canberra last week. 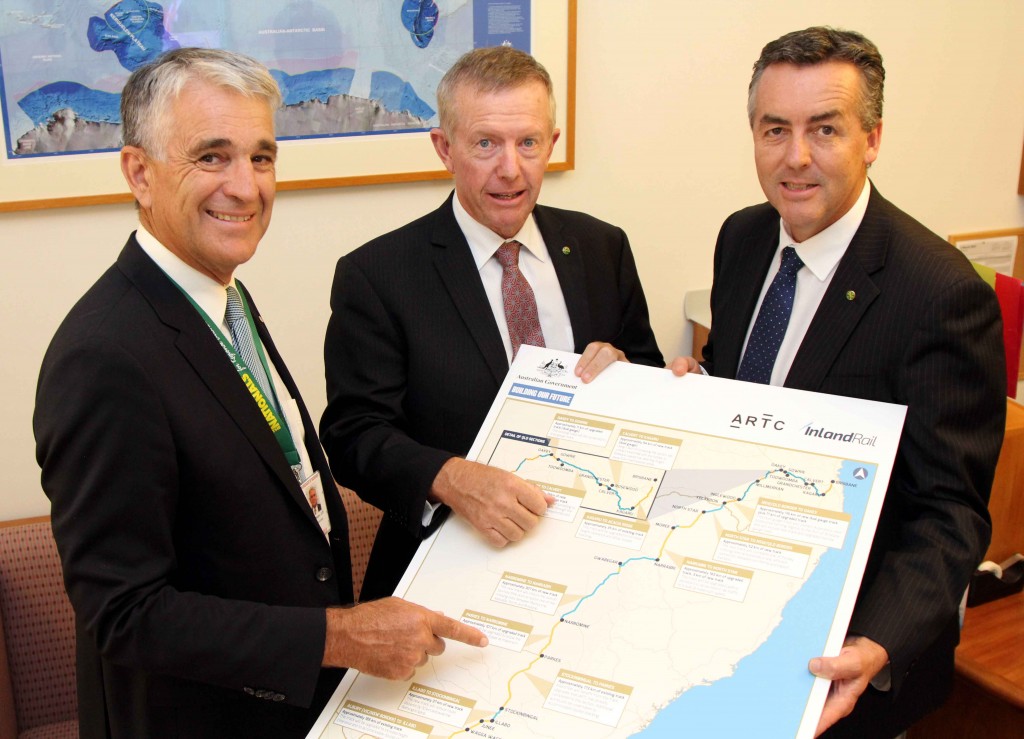 Chair of the Inland Rail Implementation Group, John Anderson AO joined Mr Coulton in meeting with the newly appointed Minister for Infrastructure and Transport, the Hon Darren Chester MP to discuss the progress of planning activities for the high performance freight line between Melbourne and Brisbane.

Mr Coulton has previously stated the importance of the Inland Rail, particularly for his electorate, and he emphasises that this is still the case.

“This project is absolutely vital to addressing the increasing freight task being experienced in eastern Australia,” Mr Coulton said.

“The Inland Rail project will produce multiple economic benefits, allowing freight to be transported with time and productivity savings.”

Mr Coulton has welcomed an announcement by Minister Chester that the Australian Rail Track Corporation (ARTC) has awarded more than $11 million in contracts in recent weeks to progress planning on the Inland Rail project.

Minister Chester said the contracts are for the provision of Technical and Engineering Advisory Services and discreet parcels of engineering and environmental consultancy across the alignment.

“Inland Rail is now in the planning and environmental approvals phase and ARTC and its consultants will commence critical field studies along the alignment over the coming weeks,” Mr Chester said.

“A joint venture of SMEC and ARUP has won the Technical and Engineering Advisory contact and will provide a team of subject matter experts who will significantly bolster the resources of ARTC’s Inland Rail team.

“This is vital work that the Government committed to ensure Inland Rail is construction ready.”

Both Minister Chester and Mr Coulton agree that the Inland Rail will boost regional economic growth and drive national productivity by connecting key production areas in Queensland, NSW and Victoria with export ports in Brisbane and Melbourne, with linkages to Sydney, Adelaide and Perth.

Christo only too happy to help out