FROM a bull in a Chinese shop to a cantankerous koala bear ambling down the middle of Balo Street late at night – it’s all in a day’s work for Moree Plains Shire Council ranger Jock Jones.

Jock has seen it all during his 20 years as local ranger and was called out to coerce a furry critter in to the back of his Ford Ranger paddy wagon when a group of locals – Telisha Lysaught, David Roberts, Abby Price and Fayth Munro  –  contacted police after spotting a koala bear meandering down Balo Street near the Memorial Hall at around 11.30pm last night.

The group of mates kept the wayward koala out of harm’s way and off the road until Jock arrived.

“They said there was a koala strolling straight down the middle of the main street – right down the white line,” Jock said. 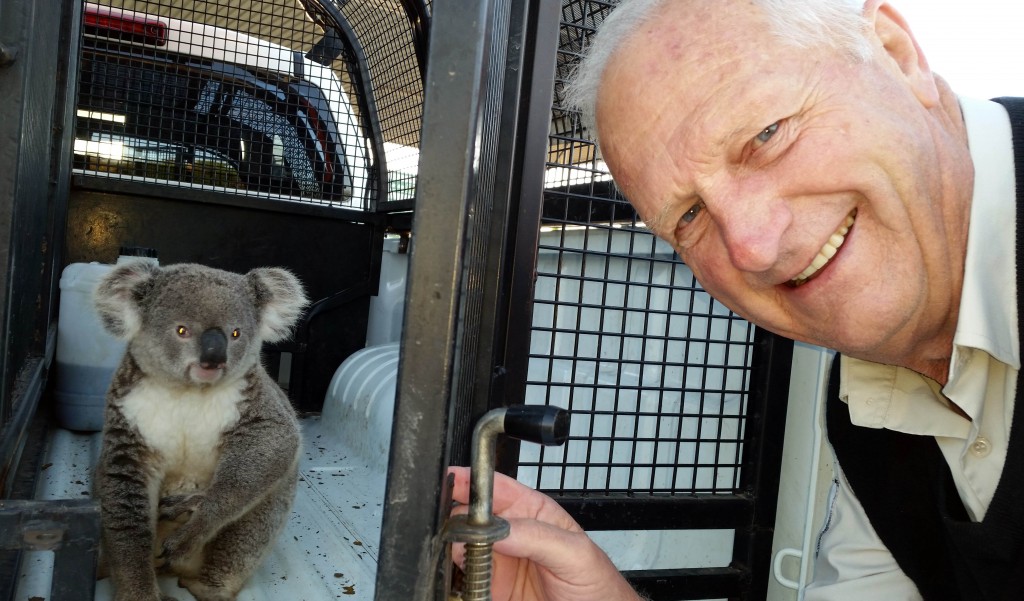 Using protective gloves and a ‘pole’ usually reserved for dogs, Jock managed to corral the koala, which was reluctant to give up its midnight adventure in downtown Moree.

“We managed to catch him and the group who called the police helped me put him in the back – but he got a bit cranky and finished up biting me on the wrist,” Jock said.

The tetchy marsupial spent the night in the lock-up – with a good supply of eucalyptus leaves, of course – before being released back to the wild early today.

“I went out near Boolooroo and released it, there are quite a few out that way,” Jock said.

“That’s the first koala I’ve seen in Balo Street, but I generally get about one or two a year that have lost their way and found themselves in town.

“I think this one might’ve come up from the Mehi River near Mary Brand Park. It’s much safer to get them out of town and in their natural habitat or otherwise dogs will get them,” he said.

While catching koalas is a little out of the ordinary for Jock, whose main stock in trade is wandering pooches and caterwauling felines, nothing beats the day a bucking brahma roamed into Hong Yuen’s on Heber Street about 15 or 20 years ago.

“Yes, it was like a bull in a China shop,” Jock laughed.

“He got away from the Moree Show and actually went in to Hong Yuen’s and wandered around the aisles knocking a few things over.

“He was eventually caught and returned to the rodeo at the Show,” he said.

Snakes are another species not strange to Jock, and with summer rapidly approaching he warns Moree residents to be alert as the thermometer rises.

“We’re coming into snake season now and the trick is to not interfere with them,” he said.

“The best bet is to not go near them – they are just as scared of you as you are of them.

“Residents need to keep their lawns mowed and clean and to keep any rubbish out of the yard. “Snakes basically only come into yards looking for mice and things like that, so the cleaner and tidier the yard is the less chance there is of seeing a snake,” Jock said.

Meanwhile, dog and cat owners have the opportunity to have their four-legged companions microchipped free by Moree Plains Shire Council at the carpark of Ron Harborne Oval on Friday, a MPSC media release said today.

Director of planning and development Angus Witherby said that if microchipped pets go missing or are taken to a vet, pound or animal shelter owners have the best chance of being reunited because the unique identification number contained within the microchip.

“By law, all pet owners must microchip and register their dogs and cats by 12 weeks of age or before being sold or given away. Too often they aren’t and lost pets can’t be identified or reunited with their owners,” Mr Witherby said.

“At the free microchipping day, there are no limits on the number of pets that can be microchipped however we do ask if you have more than one pet to microchip to let us know so we have enough resources on the day,” he said.

If attending the microchipping event, please ensure dogs have a secure collar and controlled by a leash and cats either in a carrier or personally held at all times.

For further enquiries please contact the Environment and Compliance team on 6757 3222.

Share
Share:
The people who brought The Red Barn to Moree are calling on YOU to audition for the group’s next production

Next post
Local schools get $4 million in extra funding