A FEW years ago there was a movie made about grumpy old men.

There was a sequel, too.

This is a story with many chapters; a story about a self-proclaimed grumpy old man from Moree, and what he is doing to help the thousands of people travelling his journey.

The word ‘grumpy’ is a misnomer, however – and anybody that knows Moree grazier Peter Guyer will tell you that.

It is a debilitating disease that has completely destroyed his quality of life.

He has been going through a living hell for more than 15 years, and it is a disease that brought along an unwelcomed friend.

Mr Guyer also suffers depression, and he has battled for years to keep the Black Dog chained up.

He is now a shrunken little man with brittle bones. But he’s not broken. Far from it.

Mr Guyer still knows how to chuckle, and when he does his smile fills the room, and the song in his voice is reminiscent of his childhood days penning poetry and prose for family and friends.

Just getting from one place to another – an everyday undertaking that most people take for granted – can be arduous, and tortuous.

But he grins and bears it, works the long hours and does the hard yards.

It’s all part-and-parcel of life on the land, except that Mr Guyer does it a heck of a lot harder than most.

Just finding a few minutes of his time for the purpose of this story was challenging.

During the past couple of weeks, this hunched-over little man has been busy down on the farm.

Plodding along, he calls it.

He and his men have been planting host trees for sandalwoods and there are always mobs of cattle and sheep to move. 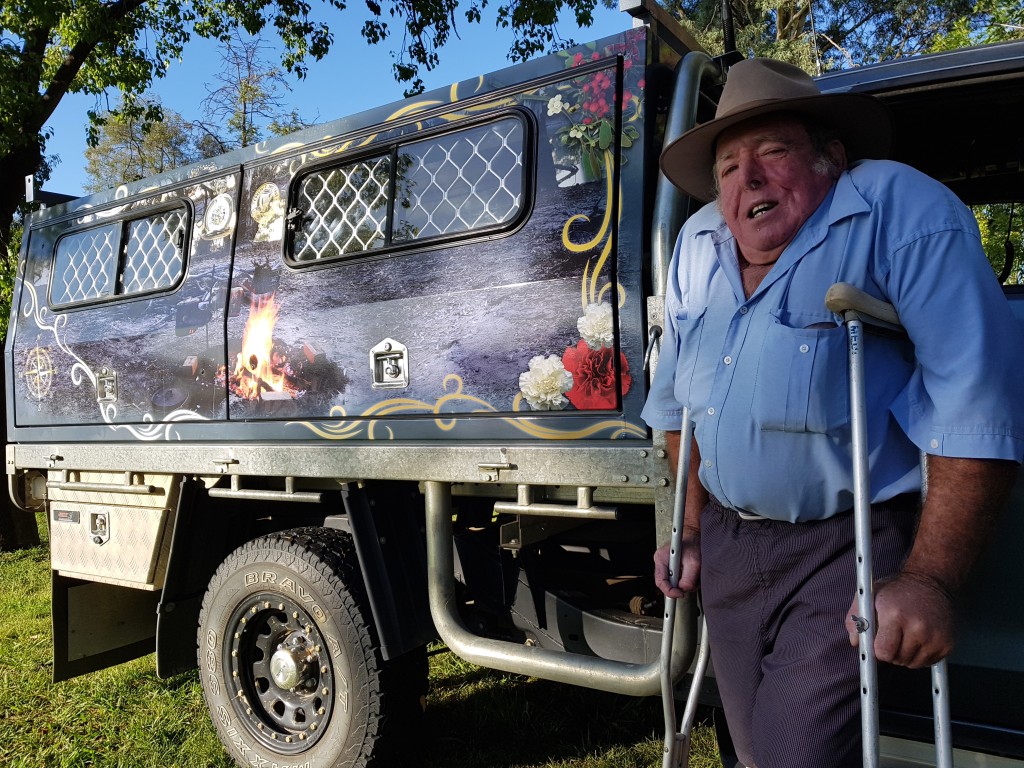 Peter Guyer with his trusty Isuzu D-Max single-cab The Grumpy and the mural that tells a thousand stories, depending how they are interpreted. Mr Guyer and best mate John Abra will take to the road in March to raise money for Beyond Blue as part of the 2018 Beyond Bitumen Rally (Image Copyright Bill Poulos).

“We get as much done early in the day as we can before the heat sets in,” he said.

Yes, life’s bloody hard – some might say ‘a bitch’ – but Mr Guyer has a simple philosophy that gets him through.

“There are just too many adventures to be had,” he says with a wink.

It is a belief based on practice rather than theory, and Mr Guyer has stuck by this belief during years of fighting disease and mental illness.

It keeps him going, and there is no drug or treatment that can replace it.

His next big adventure will be a journey of self-discovery across the backblocks of central-western NSW as he raises much-needed funds for Beyond Blue, a mental health service he knows well.

Mr Guyer will next month jump behind the wheel of the trusty late model Isuzu D-Max single-cab he fondly calls The Grumpy and take part in the 2018 Beyond Bitumen Rally.

Along for the ride will be best mate John Abra while back home will be the two ladies in Mr Guyer’s life – his wife Deborah and daughter Chantele as well as grandsons Thomas, William, Jackson and Leevi.

“He faces many battles with his health but I think his biggest fight is against The Black Dog, yet he somehow manages to always come out on top.

“I always get asked by so many people, ‘how does he do it’ and ‘how does he go on’ and I always tell them the words he tells me and the words that I now live by: There are too many adventures to be had,” she said.

An incredible mural with an important message adorns The Grumpy, and that message will be spread across the central-west when Mr Guyer and about 75 other motoring enthusiasts take off from Bathurst on March 23.

The 1400km trek will take in dirt roads across farms and through forests before winding up at Orange on March 26.

“I am taking part in the rally to raise awareness, and to let people know that there is always hope in the midst of the loneliest depression,” Mr Guyer said.

“Perhaps to some people I am just a silly old man in a silly old car but I believe that Beyond Blue is an incredible organisation that helps and gives people hope to fight and beat The Black Dog.

“That’s why I am asking for even the tiniest of donations to help raise awareness while I am on my adventure, and to show that there is life beyond depression and injury.

“I want to remind people who are hurting and fighting their own war that there are just too many adventures to be had,” he said.

Mr Guyer was 42 when first diagnosed with osteoporosis. He was young, fit and active. He loved a good game of tennis and worked hard.

He doesn’t know how it came about or what triggered it. What he does know, is that osteoporosis stirred the Black Dog.

“Osteoporosis has gradually shrunk my body over these past 16 years,” Mr Guyer said.

“Who knows what caused it. Maybe a misspent youth, maybe a heck-load of stress – yes, stress can cause it – or maybe it was getting my body smashed  daily while mustering on ag bikes, which is not really good for the lower spine,” he said.

“At first, I had to give up tennis as the symptoms started to affect my body. The black dog of depression came along to bite my ankles every now and then . . . and he bites hard at times.

“For me, I know that if I have a belief in the future I can chain the black dog up for a while. The beggar cannot bite very easily when on its chain.

“But life happens. I am fighting and, in my own way, winning the battle. And even though I still break bones, they have to get hit reasonably hard, thanks to great advances in medication,” he said.

“The depression that comes and goes is a right-royal pain in the behind.

“It makes life pretty horrible until you chain the Black Dog up again. It is never easy but I have lived through and beaten the dog many times over the years.”

Mr Guyer said that during the past 16 years he has seen many people fighting injury when their lives suddenly turned pear-shaped through no fault of their own.

“The Black Dog loves that,” he said.

“It preys on their fears and tries to destroy hope, and it destroys lives because the fear seems so immense.

“I have been in hospital wards where folk should be getting their lives back together, but they look lost . . . seemingly blinded by depression,” he said.

“These injured folk need to be shown hope, love, courage, strength, bravery and determination by quiet, silent example and then people can watch as these heroes tie the dog up . . . that is how brave they are.

“Depression will make you forget all about the good things in life, but they do exist and cannot be taken away.

Peter Guyer’s journey across central-western NSW as part of the 2018 Beyond Bitumen Rally begins on March 23.

Just a small donation will make the world of difference for the thousands of Australians suffering depression.

The Black Dog needs to be chained up.

You can help by going to Mr Guyer’s Beyond Bitumen Rally page and making a donation.