HISTORY beckons a group of popular racehorse owners from the Moree district after back-marker Track Flash defied an aversion for dirt on a track that suited on-pace runners to storm home and win the 1400m B&W Rural Mallawa Cup on Saturday.

Track Flash, trained at Moree by Peter Sinclair, had already annexed the Boolooroo Cup at Moree picnics two weeks earlier – his second in as many years – and is now poised to become just the fourth horse in 88 years to win all three cups on bush racing’s Golden Triangle when he tackles the Talmoi Cup at Garah on June 23.

Eric Jurd’s Mulgate set the Golden Triangle grand-slam standard back in 1961 and it took 27 years before Trevor Smith’s Gefilte could emulate the feat.

Sinclair led back grand-slam winner Tapakeg in 2014 and is now destined to rewrite his own chapter of Golden Triangle history when he saddles up Track Flash at the historic Talmoi track in two weeks’ time.

The record books show Sinclair as just the third trainer to win all three cups in the one season – now he strives to become the first trainer in history to achieve the feat twice. 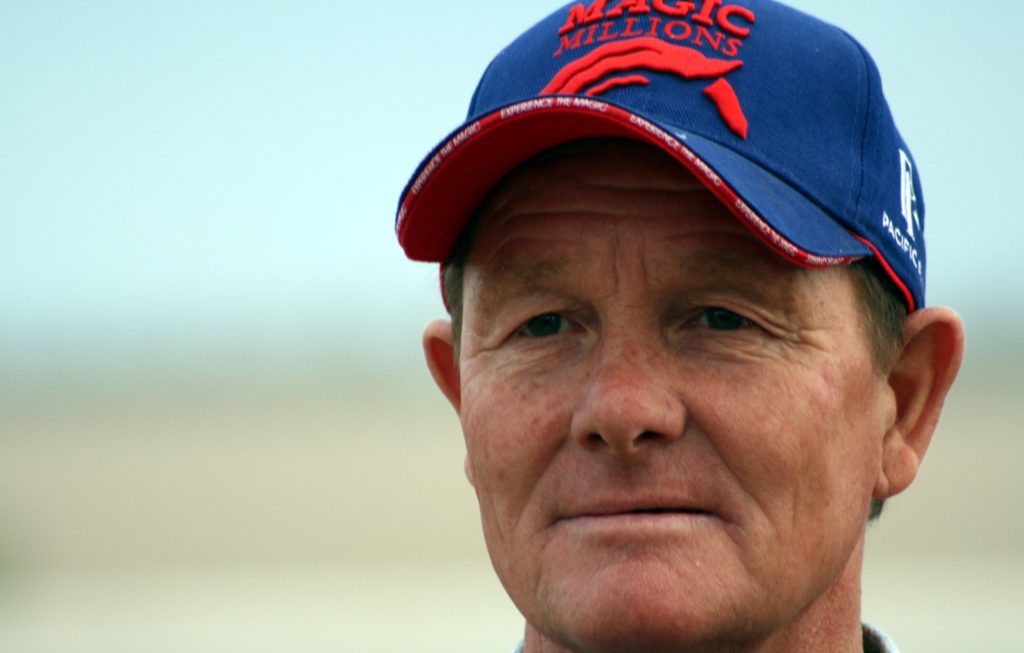 “The pressure is on,” Sinclair smiled.

“Please, don’t even talk about it,” Hunt chuckled as leading picnics’ hoop Ricky Blewitt brought Track Flash back to the winners’ stall.

“This in my third Mallawa Cup, and I had waited a long, long time for the first one (General Relativity).

“This year Track Flash has come back better than ever, I think. He’s maturing with age . . . a bit like me,” he smiled. 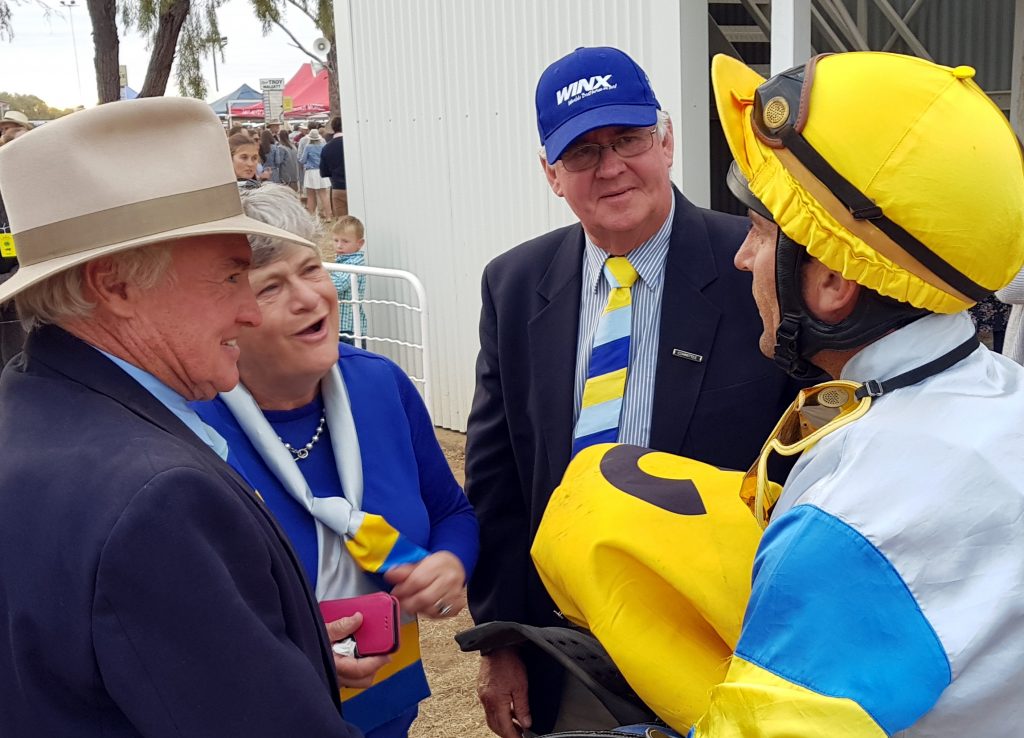 “He’s been a great horse for the syndicate and has given us a lot of fun.”

“Track Flash surprised me, but in other ways he didn’t,” Sinclair said.

“His work has been better this time in, and his work on Tuesday morning was good enough to win today.

“But in saying that, his work last year was good enough to win as well but he went to Mallawa and ran fourth,” he said.

“He also finished third at Talmoi (last year) so I was seriously worried about the dirt track, especially after the way the day had unfolded.

“All the winners were travelling first or second and were right up there and he’s simply not that sort of horse.

“If we had come to a grass track today after his work on Tuesday, we would have been very, very disappointed had he got beaten,” Sinclair said. 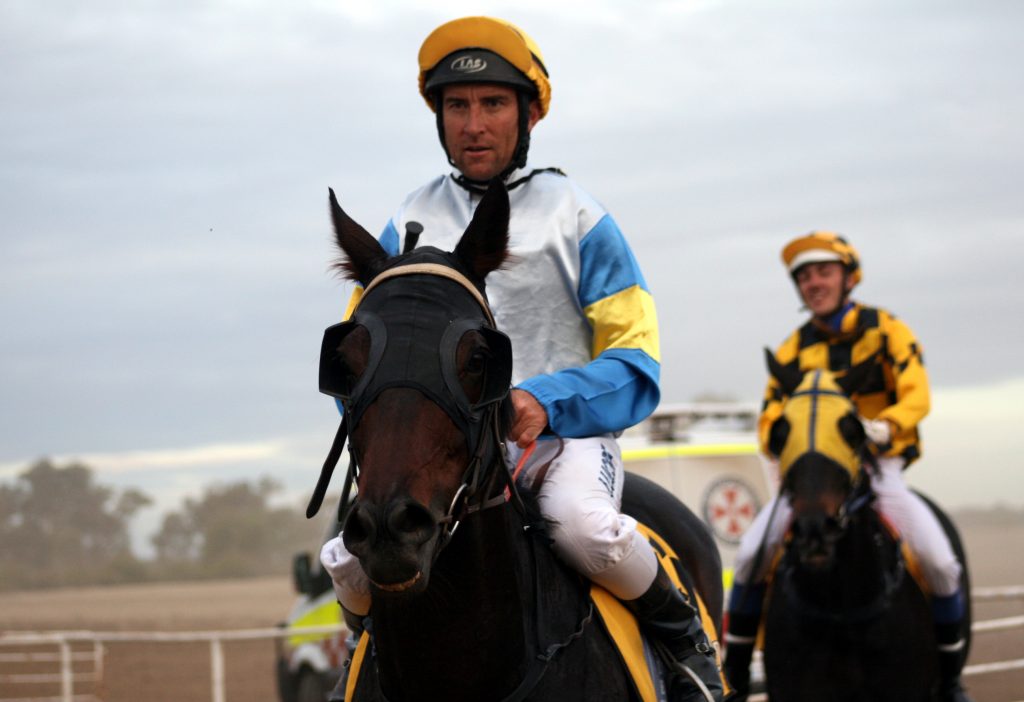 “He handled the dirt and that means he’s a better horse this preparation. He’s also got a bit of breeding – he’s by Lohnro – but the biggest thing about him is that he’s a trier; he tries very hard.”

Track Flash (10-9 eq fav) was carted into the race by About Time as the field approached the midway point before charging home on the outside to score by a widening three lengths from Rena’s Lad (7-1).

Blewitt had nothing but praise for Track Flash.

“He’s just a pearler of a horse. He doesn’t handle the dirt but he gets through it, and it wasn’t until he got out in the middle of the track and let down that he felt good,” Blewitt said.

“It all worked out good for me. They went hard early and I was three pairs back on the outside. About Time took off at about the 900m so I just got on to his back in the better going.

“It was a day where horses couldn’t make up ground and I was glad when About Time took off three-wide – I was pretty happy with where I was in the running.

“After that, it was all over.

“He’s my favourite horse by far; I think I’ve ridden him nine times now and won seven on him,” Blewitt said.

Track Flash now awaits a date with destiny at Talmoi – and Blewitt believes the gelding can etch his name alongside grand-slam winners Mulgate, Gefilte and Tapakeg.

Track Flash is also guaranteed a start in the $50,000 Picnic Championship Final at Dubbo in September.

“I think today’s win will also get us in to the final at Dubbo,” part-owner Geoff Hunt said.

“We got in to the race last year by the skin of our teeth but unfortunately he got too far back and flew home for fifth,” he said.

The Sinclair army set to march on Mallawa picnics today

Next post
Wright and Robb unstoppable at Mallawa picnics