She celebrated her first birthday just 24 hours after the Armistice was signed in 1918 and, as a toddler, survived the Spanish Flu pandemic of 1919-1920.

A decade later, as a teenager, Gladys lived through the Great Depression.

She was a couple of months’ shy of her 22nd birthday when Adolph Hitler invaded Poland in 1939 – the flashpoint that triggered World War II.

When Neil Armstrong walked on the moon 30 years later, Gladys was 51 and the mother of two teenaged sons.

Earlier this year, when COVID-19 was officially declared a global pandemic, she was 102.

It’s fair to say, maybe even a given, Gladys Bassett has lived – and is still living – a full and rewarding life.

On November 12, Glad, as she is known by family and friends, celebrated her 103rd birthday at Whiddon Nursing Home in Moree, with sons Ben and Richard and daughter-in-law Shelly by her side.

Glad was born in Bathurst, the eldest of five children to Dan and Ada Evans and spent her childhood days with siblings Stan, Lorna, Daphne and Max in Canowindra, a history-rich town in central-west New South Wales.

An above-average student, Glad enjoyed swimming and picnics and played hockey and tennis as a teenager.

She left school before her 16th birthday and began working life in the local Ford garage, Canowindra Motors, where she learned book-keeping, spare parts operations and sales contracts. 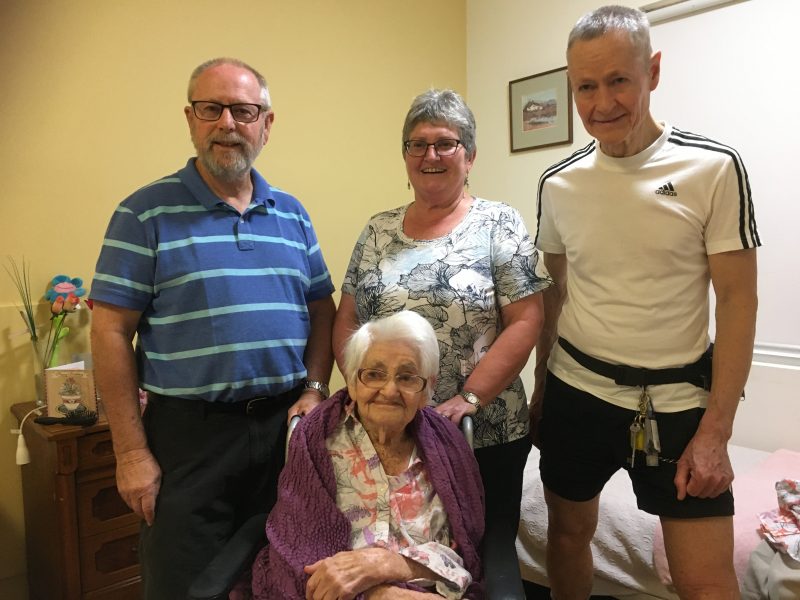 During the early 1940s Glad met farmer Reg Bassett at a local dance and a romance soon blossomed.

They married at Canowindra Methodist Church in 1944, a union that produced two sons – Richard, born in 1948 and Benjamin, born in 1953.

“Mum was very social in her younger days; she was very much involved in the church, Red Cross, sport and local dances,” Ben said.

Glad was also an active member of the Younger Set, a branch of the Country Women’s Association formed in 1928 under the sponsorship of parent branches to meet the needs of girls and young women.

“Mum and dad lived on the Bassett family property at Nyrang Creek, a few miles west of Canowindra, and moved into town where dad and his brother Frank ran a stock and station agency,” Ben said.

In 1956, the family purchase Bristol, a mixed-farming property at Croppa Creek.

She was afforded life membership of the New South Wales CWA and is a CWA Gwydir Group Patron.

She was also named Moree Senior Citizen of the Year in 1990.

In 2005 Glad, a prolific letter-writer and keen gardener, was recognised for 32 years’ service to the Christian Bookselling Association of Australia.

Reg and Glad retired in Moree in 1971 and purchased a home on Dover Street to be close to Moree Spa Baths.

“Mum and dad loved the spa baths and also enjoyed caravanning and holidaying all around Australia in their retirement,” Ben said.

“After dad died, mum continued with church and community work until she moved to Fairview Retirement Village (now Whiddon), where she continues to live.

“Even at 103, mum still enjoys talking to people, choir, reading and visits from family,” he smiled.

Ben said his mother’s secret to a long and fulfilling life was a good diet and simply maintaining a healthy and active lifestyle.

“A strong connection with family has always been important to mum and she attributes her longevity to eating plenty of fresh fruit and vegetables when she was growing up,” he said.

“Mum has strictly been a non-smoker and non-drinker her entire life and, I guess, the proof is in the pudding,” he smiled.