GIVEAWAY sprinter Folkstone is set to continue its winning ways at Mallawa today, despite being walloped with 69kg – eight-and-a-half kilos more than nearest rival in the weights, Beau in Chains.

Folkstone, trained by former ace hoop Luke Morgan, has won three from just four career starts and was super-impressive at Moree picnics last month when an all-the-way winner over 950m.

Morgan, who now runs his own breaking-in and pre-training farm on the outskirts of Tamworth, was gifted the four-year-old by Walcha’s well-known Nivison family, owners and breeders of scores of top quality racehorses over many decades.

“The horse was given to me because he was a bit of a handful in his younger days,” Morgan said.

“I do a bit of breaking-in and pre-training for the Nivisons and they offered me Folkstone to have a go with – they said if I could sort him out I could race him.

“I’ve just poked around with him and to be honest the first six months I had him I used him as lead pony and rode him all day every day to try and get that bit of rubbish out of him,” he said.

The gelding is by Dubleo from former top-class mare Dido, a winner of four from four before sadly breaking down.

“I rode Dido when I was an apprentice,” Morgan said. 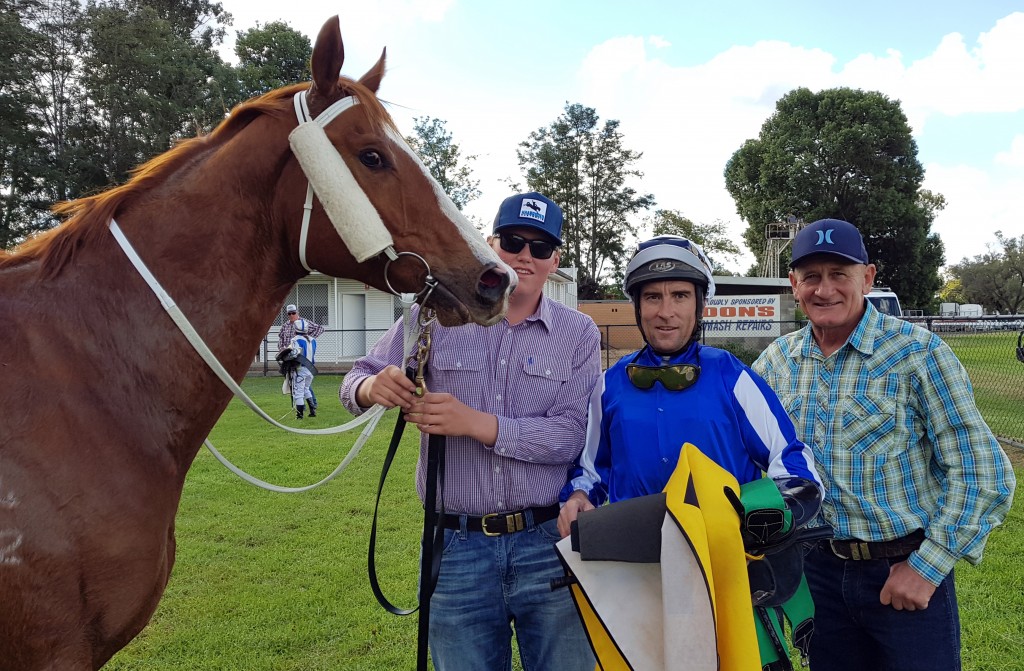 “She was a very smart mare that has produced some good horses that go pretty good.”

Morgan, who as a jockey rode Linga Longa to win the Mallawa Cup in 2008, believes that Folkstone is a little better than picnic class.

“He certainly is probably a bit better than picnic grade but I just want to poke around with him and get him a bit better educated, and these smaller fields sometimes work in his favour,” Morgan said.

“I enjoy going to the non-TABs with him, even though he probably is a better than that, but he’s just not your everyday sort of horse.

“I rode him at home a lot in the stock saddle just to try to keep on top of him,” he said.

Folkstone, with leading picnic hoop Ricky Blewitt again in the saddle today, has been given no easy chore with 69kg.

“It’s a power of weight but he’s a thick-set little horse and a robust type. I think if he puts himself in the right spot he’ll be hard to beat,” Morgan said.

“He’s a pretty good little horse to have around. He comes with his fair share of problems, but has turned the corner, that’s for sure.”

Race 4: Ace Lightning the pick in a very hard race;

Race 5: Only six starts but a case can be made for every one of them. Zaphod and Track Flash hard to beat while Rusty Motorbike is ready to produce winning form;

Race 6: Another hard race. Noceur and My Dubleo Boy look the top two in an even lot.

And then there were 12: Anna Winter prepares for leaders’ leap of faith