From Gravesend pony camp to the Melbourne Cup: The rise and rise of Blake Spriggs

HE has shaped a successful career in the saddle – helped in the early days by attending pony camps at Gravesend – and now rising star Blake Spriggs is staring down the barrel at rides in the Caulfield and Melbourne Cups on classy imported stayer Sir John Hawkwood.

Spriggs and Sir John Hawkwood, trained at Randwick by John Thompson, combined to collect their first Group 1 success on Saturday when they charged clear to win the 2400m The Metropolitan at headquarters, beating Antonio Giuseppe and Allergic by more than a length.

Spriggs, the grandson of Moree racing legend Kevin Hartin and son of former Moree jockey Dale Spriggs and Hartin’s daughter Chic, has established a successful riding career on the provincial and metropolitan circuits in recent years, and is still pinching himself after Saturday’s Group 1 win on the eight-year-old gelding.

“It was unreal. I can’t describe it; it’s phenomenal,” Spriggs said.

“On the way back to scale, Bernie Cooper was there on the pony waiting for an interview and I told her that I needed a minute to let it all sink in.”

Spriggs took Sir John Hawkwood to the lead just before the home turn and as all jockeys know, it’s a long way down the famous Randwick straight.

“At the 600m, Dee I Cee on the outside of me dropped its bridle so I gave my horse a bit of a squeeze up, just in case I had to push it out of the way – I had plenty of horse under me,” Spriggs said.

“But he quickened just a bit too well – more than I really wanted – and hit the front very early as we turned into the straight.

“I thought I might’ve gone a bit too soon but once we got up over the rise and I gave him a real good squeeze, he responded and found a good two lengths,” he said.

“I knew then that we had the race in the bag and he stuck solid all the way to the post. 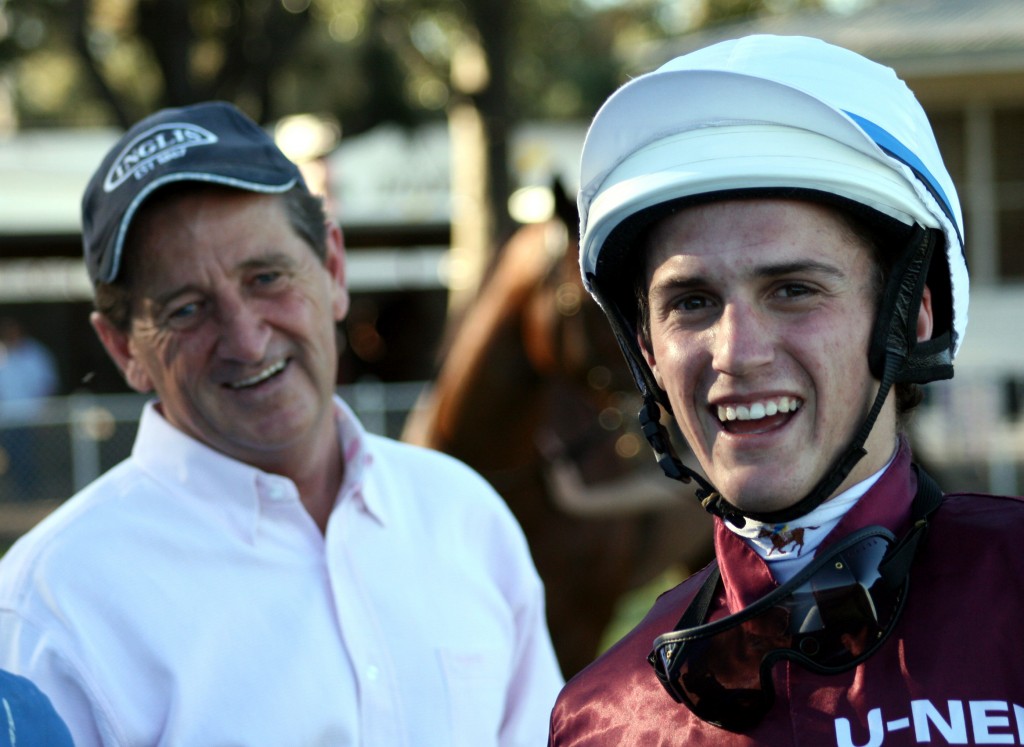 Blake Spriggs after winning the Moree Cup on Geigeron for Steve Hodge (at back). Spriggs now has a date in Melbourne on that fabulous first Tuesday in November with classy imported stayer Sir John Hawkwood. (Image Copyright Bill Poulos)

“The exciting thing is that he pulled up well and pulled all the way back to the enclosure – you wouldn’t know that he had been around.”

Spriggs, who also won the 2015 Listed Christmas Cup (2400m) and this year’s Group 3 Sky High Stakes (2000m) on Sir John Hawkwood, is the only jockey to have ridden five winners in a day on a metropolitan track while still a 3kg-claiming apprentice.

He achieved the feat at Rosehill Gardens in 2010 when saluting on Crossbow, African Prince, Atomic Force, Mr Unforgettable and Miss Independent.

But he says winning his first Group 1 race easily outstrips his quintet of winners.

“Riding those five winners was very special, but to win a Group 1 race is so very, very special,” Spriggs said.

“Most jockeys don’t get to ride in Group 1 races, let alone win one, and it really hit me after the race when John Thompson said in a post-race interview that ‘it was a Group 1 ride from a Group 1 jockey’. . . that is something that I never thought I’d be calling myself.”

The 24-year-old jockey, who won his first Black Type race on Squamosa in the Group 3 Run to the Rose the same year as his Rosehill quintet, said Sir John Hawkwood – owned by Paul Fudge of Waratah Thoroughbreds fame – was easily his favourite horse.

“He was my favourite horse before the race. I honestly don’t know what exactly it is about him, but since day one he’s had a soft spot for me,” Spriggs said.

“He’s just an absolute gentleman. There are plenty of horses out there that are better than him, but for all the little niggling injuries that he’s had and to still be able to turn up at eight years of age and love to race – and to keep improving – is unbelievable.

“He should be winding down and getting ready for retirement, especially with the little injuries he’s had,” he said.

Now it’s a trip down the Hume Highway to Melbourne for the Spring Carnival and a start in the Melbourne Cup on that fabulous first Tuesday in November for Spriggs and Sir John Hawkwood.

“I’m having a meeting with John Thompson and owner Paul Fudge today (October 3) to see which way we go from here,” Spriggs said. 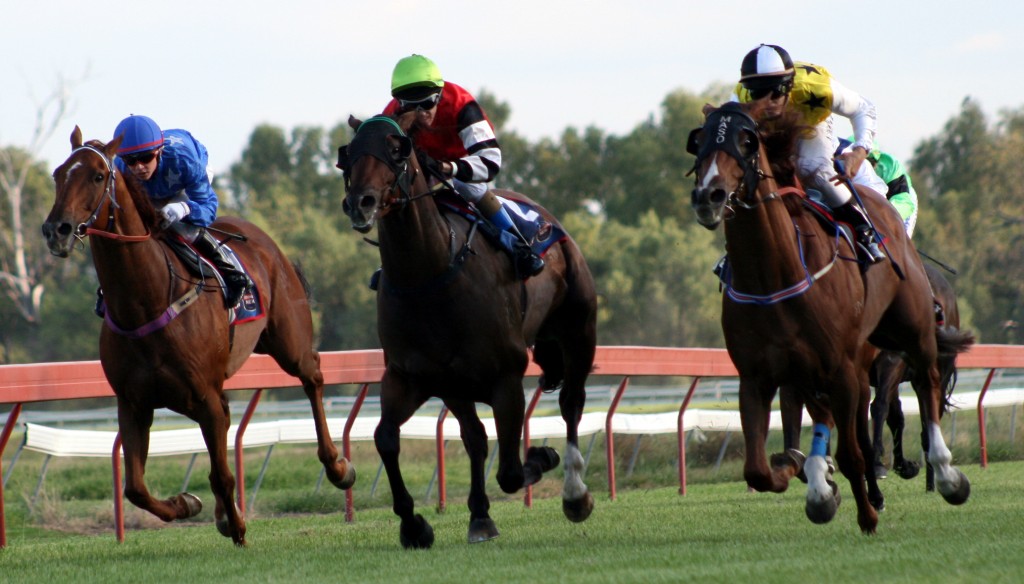 “The horse generally likes his races spaced so we have to work out whether we can run him in the Caulfield Cup and still have him well and fresh enough to run in the Melbourne Cup.

“That would be fine with most horses but we’ve found the formula with him, and that’s to keep him fresh, and we don’t want to get away from that,” he said.

Sir John Hawkwood is 25th in the order of entry for the Melbourne Cup and assured of a start.

“He’s basically going to get a run because there are a few horses above him that are doubtful of starting,” Spriggs said.

“Now it just depends on what path we take to get him there – whether we run at Caulfield or find another option.

“We need to find a way to keep his fitness levels improving and get the best out of him on the day.

“It was good to see Blake get his first Group 1 win,” Thompson said.

“And it’s good to see the owners supporting Blake – that’s pretty rare in racing,” he said.

“Sir John Hawkwood is a good little horse – he tries. He’s an on-pace horse so I think Caulfield will suit him,” he said. 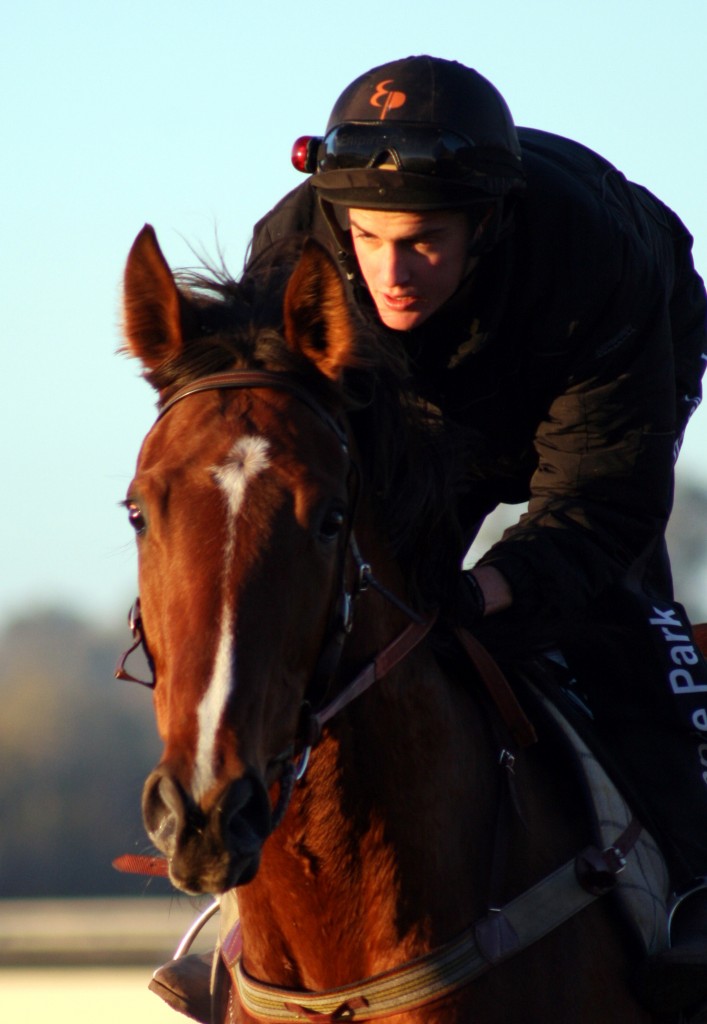 “Blake often came to Moree as a young fella and did a lot of pony camp with us, and he’d come across to the track of a morning and ride work for me,” Sinclair said.

“When he was about 12 or 13 he had this little black filly and he used to ride the ears of the poor little thing,” he chuckled.

“We always knew that he was going to be a jockey because he’d go flat out every time he was on her.

“But to have rides in the big races like the Caulfield and Melbourne Cups is a great achievement – Blake is a good jockey, and a great person to go with it,” Sinclair said.

Proud mum Chic says her son, who as an apprentice won the 2009 Moree Cup on Geigeron, 2008 Moree Town Plate on Dashound and the 2009 Moree Cotton Cup on Crowntreno, had his mind set on becoming a jockey at a very early age.

“I put Blake on a racehorse at Bega racecourse on his fourth birthday and he said then that he was going to be a jockey,” Chic laughed.

“When Blake was 10 I sent him up to dad where he could be around animals, from chooks to cattle and calves – and horses, of course. He would help dad and Phillip Sinclair with the poddy calves.

“Then we bought him a pony and dad would watch him for hours,” she said.

Spriggs attended Gravesend pony camp for five years, learning to ride from all the right people.

“People like Peter and Jenny Sinclair and their son Nathan, and Peter’s mum and dad Phil and Pat, as well as his sister Jacque, all helped Blake in his early days.

*NSW TAB Fixed Odds has Sir John Hawkwood at 25-1 for the Caulfield Cup behind impressive Turnbull Stakes winner Hartnell (5-2 favourite) and 33-1 for the Melbourne Cup, also behind Hartnell, the current 6-1 favourite.