CULT Moree gallopers Free Billy and Track Flash have a date with bush-racing destiny – and now the race is on for the Peter Sinclair-trained stablemates to earn enough points to gain berths in the $50,000 NSW Picnic Racing Championship Final at Dubbo in September.

Track Flash is no stranger to the rich Dubbo Final – he finished fifth in the 2017 inaugural edition and fourth last year while Free Billy is picnic racing’s new kid on the block.

And the eight-year-old has certainly cast a huge impression since crossing from professional racing to the picnic circuit in recent weeks.

Free Billy, owned by the well-known Bryans family of Moree, has proven a fairytale come true since being purchased as a tried horse in early 2016.

Put in the hands of trainer Peter Sinclair, Free Billy immediately won the Moree Chopper Cup before taking members of the Boar Boar Syndicate – named after the late Nathan Bryans – on the ride of their lives.

“I bought Free Billy after the sudden loss of my brother Nathan, hoping to get mum and dad into something that they could enjoy and to help ease a bit of the pain,” syndicate manager and former top jockey Jimmy Bryans said.

Since winning first-up for the syndicate in February, 2016 Free Billy has collected nine wins and 11 placing from 47 starts.

He’s a dual Goondiwindi Cup winner and has finished in the minor money in the Gunnedah, Inverell, Glen Innes and Deepwater Cups. 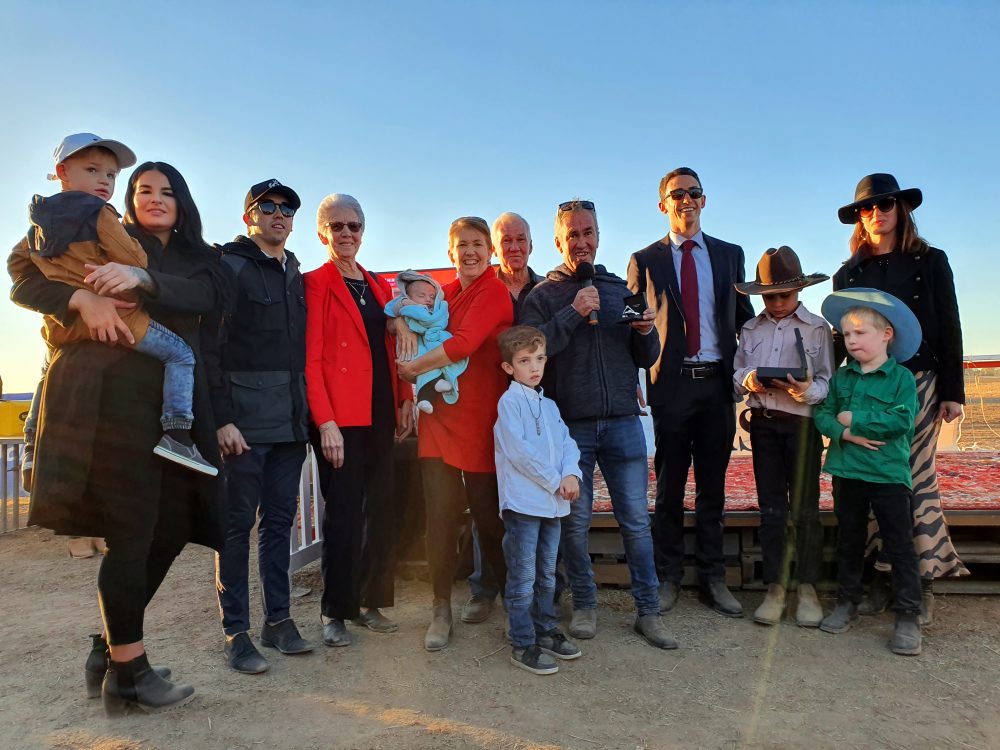 And now his return to racing on the picnic circuit has the gelding primed to tackle bush-racing’s Holy Grail at Dubbo on September 15.

Free Billy resumed at round one of bush racing’s Golden Triangle in May with a slashing first-up win in the Moree Bracelet before finishing a gallant second to Luke Morgan’s Folkstone in the Mallawa Bracelet.

Free Billy races this Saturday in the Wean Bracelet – where he’ll again meet Folkstone – while stablemate Track Flash, winner of the Boolooroo Cup at Moree picnics in May, attempts a hat-trick of Wean Cups.

“We need the points to get into the big race at Dubbo,” Bryans said.

Track Flash currently sits on 19 points with Free Billy on 18 however wins at Wean on Saturday will catapult both gallopers up the ladder.

Points are calculated on wins, placings and appearances at picnic race meetings across NSW during the current racing season.

“Free Billy has been an awesome purchase and if he gets into the Final at Dubbo he’ll be a big show,” Bryans said.

“His three starts after a lengthy spell at Lee Carrow Spelling Farm at Delungra – which did a tremendous job with him – have been out of his comfort zone because his pet distances are 1200m to 1400m.

“Hopefully, he’ll run a good race at Wean but will probably get around 73kg – wherever he goes, the crowd loves him,” Bryans said.

Nyngan maestro Rodney Robb, who has won the only two editions of the Picnic Championships Final with Security Code (2017) and Austin last year has Rusty Motorbike (23) well in contention for a start while Austin sits on 12 points.

The Wean Cup meeting has drawn 36 nominations with entries for four of the five races extended until 11am Tuesday, July 9.

A bus supporting the Westpac Rescue Helicopter Service will leave the Royal Hotel, Moree on Saturday morning at 9.30am and collect passengers at Narrabri en route to Wean.

Tickets from Moree are $70 each and include race-day entry.

Bush school facilities open for public use during winter holidays