THE Pacific National Moree Chopper Cup meeting on Saturday was the backdrop for an unofficial get-together of two groups of former Moree High and Courallie High School students, their partners and friends.

Nearly half those students left in 1972 to become scholastic pioneers of the newly-built Courallie High School – and thus decades of legendary school rivalry began, both in the classroom and on the sporting fields.

Chief organiser Mike Hadfield said Moree again put out the welcome mat for around 50 people who arrived for the weekend to reminisce, re-establish old friendships and try their luck on the gallopers at the local races, which raised money for the Westpac Rescue Helicopter Service.

“Both these groups had official reunions last year and it was decided to catch up again in Moree this year to patronise the races, spend some money in town and reunite with people who they had not seen in decades,” Mr Hadfield said.

Mr Hadfield said that he and his fellow organisers were pleased with the roll-up on Saturday and will plan similar get-togethers in future years. 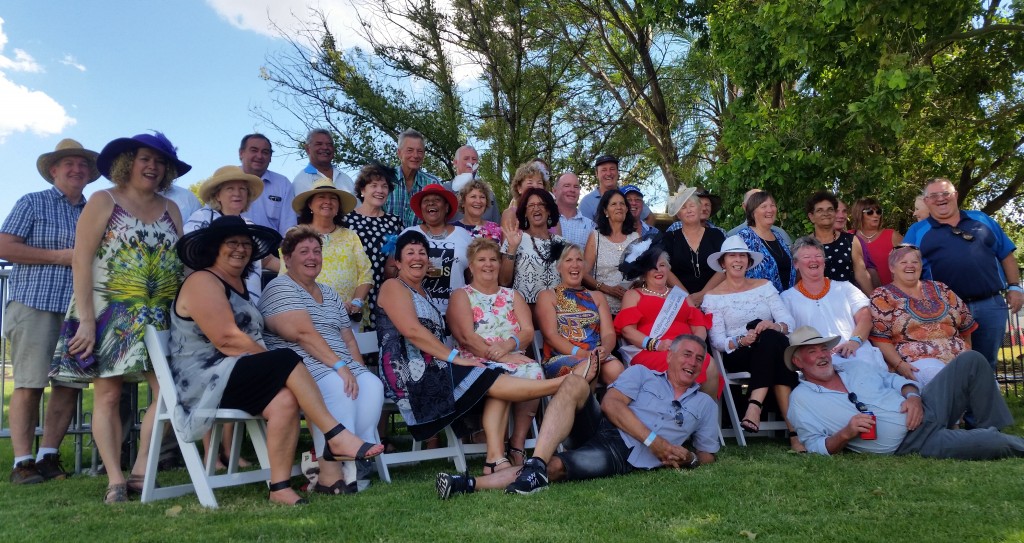 “The Chopper Cup was chosen for 2017 as it is an incredibly important service that Moree and the district has access to, with a large component of the expenses for the service being met from donations,” Mr Hadfield said.

Supporting such a vital service is close to Mr Hadfield’s heart – it was responsible for ensuring the health and well-being of his wife Kim and unborn son 26 years ago.

“I will be forever indebted to the Westpac chopper service for being there in the middle of the night all those years ago to help avoid a double tragedy in my life,” Mr Hadfield said.

Saturday’s meeting drew a good crowd, given that the temperature soared yet again to the high 30s before the track was deluged with a fierce storm late in the afternoon.

“It was a great day and great to catch up with everyone,” Mr Hadfield said.

“We are certainly appreciative of the support of club president Robbie Mather and secretary Michelle Gobbert who supported the idea many months ago, and certainly made the day more comfortable for reunion patrons, many of whom had not experienced the Moree heat for many years,” Mr Hadfield said.