COMMERCIAL flights will return to the skies over Inverell with the announcement today that regional airline Fly Corporate will commence direct weekday morning flights between Brisbane and the Sapphire City, with return flights via Moree.

The first Fly Corporate Inverell-Brisbane service will leave the tarmac on Wednesday, September 13 with tickets on sale from tomorrow, July 6.

“We have been in conversation with Inverell Shire Council and the Inverell Chamber of Commerce through their Inverell Air Service Working Group for almost a year,” Mr Major said.

“We have been very impressed with the strong business case that the IASWG and the council have presented to us to establish the service.

“This representation and support, along with our own research, gives us the confidence that there is a need and a market for scheduled flights from Inverell to Brisbane,” he said.

“The convenient weekday flights will not only improve connectivity for business and tourism but will also put Brisbane within easy reach of the people of Inverell and surrounding districts for medical appointments, leisure and easy access to connecting flights – both domestic and international. 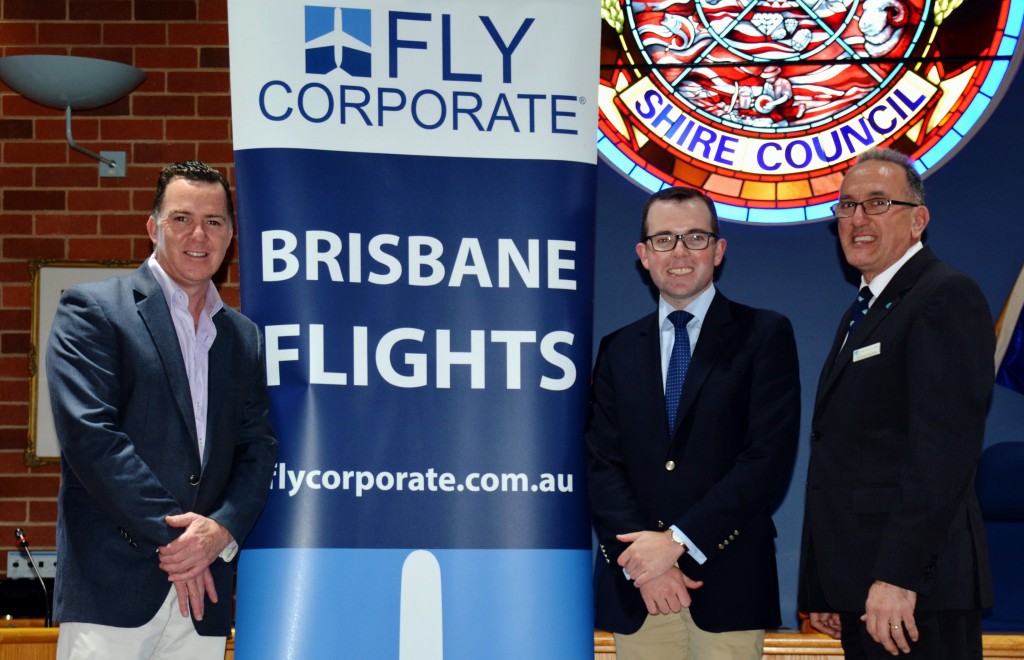 “Fly Corporate looks forward to providing this valuable service and being a part of this vibrant regional community,” Mr Major said.

“This is truly brilliant news for the Inverell community,” Mr Marshall said.

“Whether you’re in business, a tourist operator or needing access to interstate or international flights everyone will benefit from this air service.

“Inverell has working hard to attract an air carrier, since the collapse of Brindabella almost four years ago, which meant many regular travellers needed to drive to Armidale or Moree to fly commercially.

“A regular air service is an essential component of a regional community that’s on the move and I congratulate Inverell Shire Council and the business chamber’s working group on their efforts, which have paid huge dividends,” he said.

“With a clear demand from the Inverell community, the business case was undeniably strong and I’m glad that Fly Corporate has responded with such a suitable and sustainable investment.”

Mr Marshall said the 19-seat Metro 23 turbo-prop aircraft would depart Brisbane each morning, touching down in Inverell first and then on to Moree.

“This regularity will be greatly appreciated – with the triangulation of the route ensuring it’s financially sustainable well into the future,” he said.

“With well-established routes to Moree, Armidale, Tamworth, and Narrabri, Fly Corporate will give the Inverell community a sense of reliability and permanence that it has been lacking for years.

“This is important not only for travellers, but also a tangible sign that Inverell has definitely arrived as a community and removed one of the final barriers to continued growth.

“Having a regular air service not only saves three hours on a trip to Brisbane, but it also sends the message to the business community that Inverell is a growing town that offers a vibrant economy.

“I’m very confident the service will be well utilised and as the demand and the community grows, I’d like to see further routes offered.”

Inverell Shire Council acting mayor Anthony Michael the working party and council both recognise that the provision of an air service to Inverell is a precursor to a lift in economic activity.

“The connectivity that an air service provides to Australian and International destinations enhances the opportunities available for residents to conduct recreational and business activities,” Mr Michael said.

“An air service also enables visitors and others to more easily access Inverell. I look forward to the commencement of services in September, and I encourage residents to utilise these services. “Welcome Fly Corporate. I wish the company every success and look forward to considering adding other destinations to our route when the time is right,” he said.

Mr Marshall said that with today’s announcements, now more than ever before, regional communities needed the Federal Government to relax its arbitrary and unnecessary over-regulation of Sydney’s Kingsford Smith Airport.

“The artificial caps at Sydney Airport have meant that new regional airlines and communities cannot get access during the peak morning and evening periods,” he said.

“With the stroke of a pen, the airport could cope with many more aircraft movements during peak periods, which would in turn provide opportunities for communities like Inverell to get a look in.

“At the moment, without any change, Inverell and many other communities like it will continue to be denied access during the optimum times.”

Tickets for the new service are on sale from tomorrow at www.flycorporate.com.au or travel agents with $139 one-way all-inclusive Web Deal fares available.

The airline and council plan a joint launch to welcome the new service, with details to be announced soon.