FIVE teenagers have been arrested and charged at Coonamble after allegedly travelling more than 500km across NSW in a stolen Mercedes Benz.

Police will allege that on Friday, July 28, a black Mercedes Benz sedan was stolen from a home in Amaroo, Canberra.

It is alleged the car was being driven by a 16-year-old boy, accompanied by two other boys aged 13 and 15 and a 14-year-old girl.

About 7am on Saturday the vehicle was seen to stop for fuel at a service station at Molong where no payment was made.

Several calls were received from members of the public concerning the manner of driving of the Mercedes, which was allegedly travelling at speeds in excess of 150kmh along the Mitchell Highway towards Dubbo.

About 8am on Saturday officers from Orana Local Area Command sighted the Mercedes in Whylandra Street, Dubbo.

Police attempted to stop the vehicle using lights and sirens and a pursuit was commenced when the driver failed to stop.

Officers terminated the pursuit a short time later due to public safety concerns.

The Mercedes was last seen leaving Dubbo towards Coonamble. 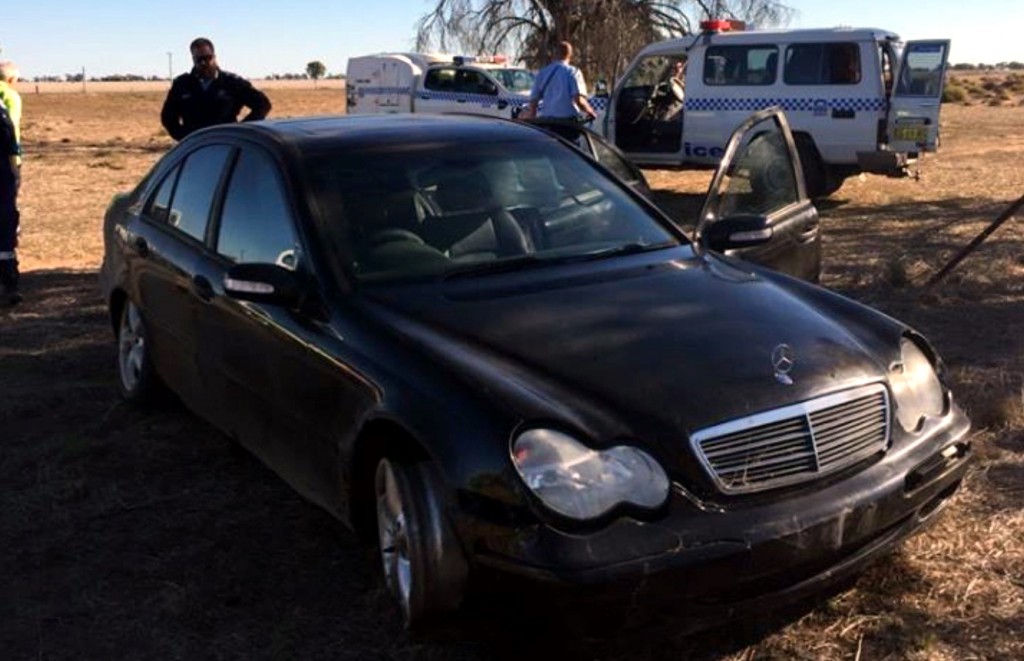 The stolen Mercedes was located near Coonamble in the early afternoon on Saturday (Image: NSW Police).

At about 1.30pm on Saturday police sighted the Mercedes allegedly doing burn-outs in Coonamble.

Officers attempted to stop the vehicle which then left the scene heading west along Tooroweenah Road at speed.

A short time later, police located the Mercedes, which had crashed on Tooroweenah Road due to a tyre blowout.

Officers arrested five teens at the scene, a 16-year-old boy who allegedly was driving the Mercedes, two 15-year-old boys, a 13-year-old boy and a 14-year-old girl who were passengers in the vehicle.

All were taken to Coonamble Police Station and interviewed in the company of a support person.

The other teens were charged with being carried in conveyance.

All five were refused bail to appear at a Children’s Court yesterday, Sunday, July 30.

Inquiries are continuing and further charges are expected.

Share
Share:
Don’t let the you-know-what hit the fan as council checks that sewerage is, um, up to scratch

Don’t let the you-know-what hit the fan as council checks that sewerage is, um, up to scratch