Fire bans in place across NSW this weekend

NSW Rural Fire Service (NSW RFS) Commissioner Shane Fitzsimmons is urging landholders to be aware and well prepared with current conditions increasing the risk of fires across the state.

With summer now underway, Total Fire Bans have already been declared in a number of areas due to hot, dry and windy conditions and are expected to continue through this forecast hot period.

Commissioner Fitzsimmons said a number of fires currently burning around the state have already caused significant agricultural damage to crops, pasture and fencing as well as sheds and buildings on farms. 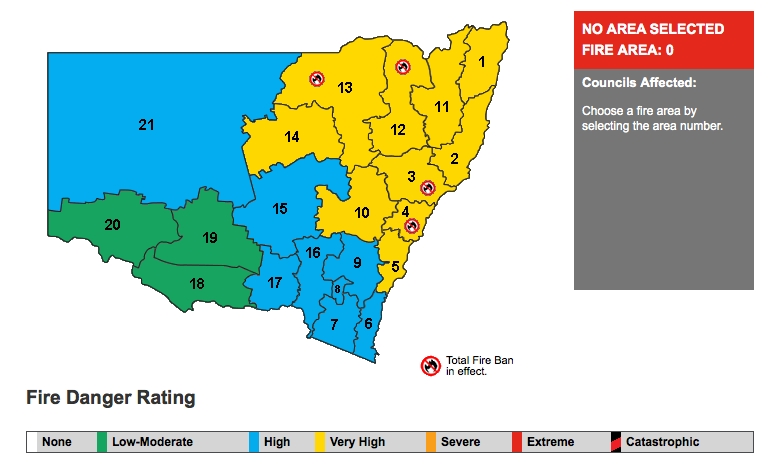 Fire bans and fire danger ratings as at Friday, December 2. Expect these to increase as temperatures increase over the weekend.

“Grass and crop fires can be especially dangerous because they start easily and spread quickly. They can destroy not only homes, properties and stock, but also lives and livelihoods,” Commissioner Fitzsimmons said.

“The Paynes Road fire to the west of West Wyalong has burned 7000 hectares since it began and spread quickly yesterday afternoon. Notwithstanding the firefighters on the ground with support of aircraft doing incredible work, this fast running fire resulted in an estimated $500,000 of crop losses, 600 sheep killed and fences damaged and destroyed.”

Commissioner Fitzsimmons said there are steps people can take to prepare for the increased risk.

“We strongly urge farmers to use the Voluntary Grain Harvesting Guide available on the NSW RFS website to determine when best to harvest.

Fires can often start from machinery with only simple sparks needed for ignition.

“Farmers can also help protect their properties by establishing firebreaks around paddocks, homes and other valuable assets such as sheds and equipment.

“People living in areas where there are crops and grass growth should have a plan for what they will do if there is a fire. Make a bush fire survival plan and discuss it with your family.”

Commissioner Fitzsimmons has stressed the importance of reporting unattended fires to Triple Zero (000) as soon possible.

“The earlier we can respond, the better chance we have to significantly reduce the damage caused by fire.”