The Australia Day ceremony was emceed by popular 2VM breakfast announcer Michael Andersen, who jokingly encouraged Moree’s newest citizens to “be a real Aussie and take Friday off to enjoy a four-day long weekend”, before a select group of residents and organisations were bestowed Moree’s highest honours, with Father Paul McCabe named Citizen of the Year.

Young Citizen of the Year was presented to Rhiannon Rose Byers and well-known local Frank Crump was named Volunteer of the Year.

The long-established Moree and District Band, which along with the Moree Pipe Band entertained the Australia Day gathering, was awarded Volunteer Group of the Year.

Moree’s Men’s Shed was honoured as the Community Event-Group of the Year, with president Peter Sampson receiving the award on behalf of the dedicated group that has done so much for Moree in such a relatively short time.

Newly-crowned Citizen of the Year Father Paul McCabe was out enjoying a round of golf when the news came through – some say divinely.

“I got a shock, I must confess – I was out playing golf, actually,” he laughed.

“Gosh, I can think of 1000 people who would be more deserving than me.

“I’m just doing a job, but I suppose if you just keep putting one foot after another you eventually get the rewards.

“With me, I guess Moree has become part of my family and I’m a part of the Moree family.

“That’s how I feel, and if you stay here long enough you become a kind of a grandfather,” he smiled.

Fr McCabe retires to Armidale next month, where he will still be active in the Catholic Church.

“The church has retirement units at Armidale so I’ll go to one of those,” he said. 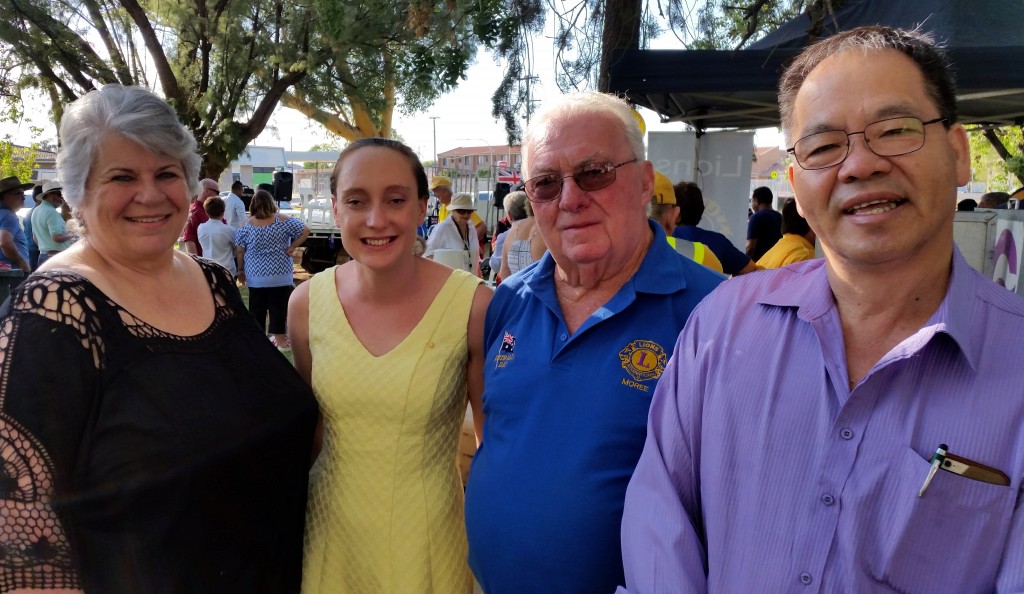 Ms Watt, 29, has represented Australia at four Paralympics from 2004 to last year’s games at Rio de Janeiro, where she competed in five different events.

She also collected a bronze medal in the Women’s 50m freestyle.

Ms Watt grew up in Nambucca Heads and was involved in Nippers from a young age. She moved on to regional competitive swimming for athletes with disabilities.

“That was where my love for swimming started. I love small country towns . . . it’s where my heart lies, I guess,” she told the small gathering at Jellicoe Park.

As a child, Ms Watt was active in other sports, including cross-country, tennis and netball, and is still an exceptional alpine skier.

“I just really enjoyed sport as it gave me the opportunity to set new personal goals and to make new friends,” she said.

By the age of 14, Ms Watt was competing at state and national levels, while also balancing her budding career in winter sports.

In 2002 she made her Australian debut at IPC Swimming World Championships in Argentina where she won two bronze medals.

Ms Watt was named the 2004 Australian Paralympic Committee Junior Female Athlete of the Year as well as the Telstra Swimmer of the Year with a Disability in 2006 and 2007.

She was invited to Moree by Moree Lions’ Club, which, along with Moree Plains Shire Council, hosted Thursday’s ceremony.

“Australia Day is a day when we should all stop and respect our nation’s past, think about our future and be grateful for what makes our country unique,” Ms Watt said.

“I am an especially fortunate and incredibly proud Australian, and I believe it is these innate characteristics that have enabled me to overcome the challenges that I have faced.

“I acquired my disability when I was born at 24 weeks – I was approximately six weeks premature – and was given 100 percent oxygen for about three-and-a-half months, and this saved my life,” she said.

“It was touch-and-go there for a while and the oxygen I was given damaged the retinas in both my eyes, and this really severely limits my distance vision – but I’ve definitely not let that stop me.”

Share
Share:
Moree off-road enduro riders prepare for Finke – and they want Moree to come along for the ride