Moree’s Group 5 under-17s rugby league team went through the 1968 season undefeated, a series of wins that climaxed with a narrow grand-final victory against Inverell. Many of the team players, family and supporters will reunite in August, along with coach Eddie Lumsden. Words copyright Bill Poulos 2013. Image supplied.

A GROUP of former Moree rugby league players – who became known across north-western NSW in the late 1960s as “Eddie Lumsden’s Boys” – will reunite after 45 years when they get together at the Gold Coast in August.

The team, coached by former Test player Eddie Lumsden, created a unique slice of Moree’s rich rugby league history when in 1968 they marched through the Group 5 under-17s competition undefeated.

The team, led by captain and five-eighth Gary Rice, won 17 consecutive matches before registering a hard-fought 7-2 grand-final win over Inverell.

The grand-final was played at Armidale and such was hometown pride in the boys, community members banded together and paid for chartered flights so the team could arrive fighting fit and ready to rewrite Moree rugby league history.

The win was also the perfect present for former St George great Eddie Lumsden, who had celebrated his 38th birthday just the day before.

Team centre Morris “Mo” Meppem, who finished the 1968 Group 5 season as the highest points-scorer in his grade, said some players had not seen each other since those halcyon days.

“This will be the first time we have all been together since then and some of us haven’t seen each other in 45 years,” Meppem said.

“All but three of the players will be present. Blokes like Daryl Burling, Kevin Kay and Kenny Bailey all played with us through the year as well, so they’ll be also coming along,” Meppem said.

“We beat Inverell five or six times that year but every time we played them the game was close.”

Inverell five-eighth David Fox said Moree was a “select team” that was always hard to beat.

“Moree was a very good team and the grand final was the closest we got to them all year,” Fox said.

“I had the misfortune of marking Gary Rice, and in my eyes Gary would’ve played for Australia. He was a terrific little player and a handful for me to handle, I can tell you,” he chuckled.

“Moree had a good set of forwards and they also had a pretty slick backline. We were getting better as a team, but they were select.”

In a fitting milestone that showcases his enduring career, Lumsden scored his 100th try during his 100th game with St George – at the time only the second player to achieve the feat since 1945.

Lumsden, who after retirement from the paddock was a NSW and Country selector for more than 20 years, was five years ago named as one of Australian rugby league’s 100 greatest players, a list commissioned by the NRL and ARL to commemorate the code’s centenary year.

He moved to Moree in the mid-1960s as licensee of the Criterion Hotel in Balo Street before leaving in 1969 to coach North Newcastle for three years.

“My wife didn’t like it; she reckoned it was too hot,” he laughed.

Now 77 years of age and retired just out of Maitland, Lumsden will travel to the Gold Coast on August 24 to meet up with the boys he crafted into exceptional footballers and local heroes 45 years ago.

“There are plenty of good memories – memories you can’t buy,” he said.

Lumsden, who played in nine of St George’s incredible 11 consecutive grand-final wins between 1956 and 1966, says hard work and dedication as well as discipline and respect were key elements to the Moree under-17s 1968 success.

“They were a good team – undefeated – in a very good year, and they trained pretty hard,” Lumsden said.

“Inverell was a good team, too, but Moree was a bit faster and they did what I told them to do – they were a good team and a good pack of kids.

The Gold Coast get-together coincides with the 40-year reunion of the 1973 Moree High School University Shield-winning team. Both reunions will be held at the Broadbeach Hotel on the Gold Coast from midday on Saturday, August 24 with the annual Moree and district reunion – now in its 21st year – held the following day at the Mudgeeraba Showground.

“The fun will actually start at around 5pm on Friday, August 23, followed by the main event at 12-noon the next day,” Meppem said.

“It’s going to be a huge weekend. Everyone is welcome to come along and it will be great to see some old faces from Moree,” he said. 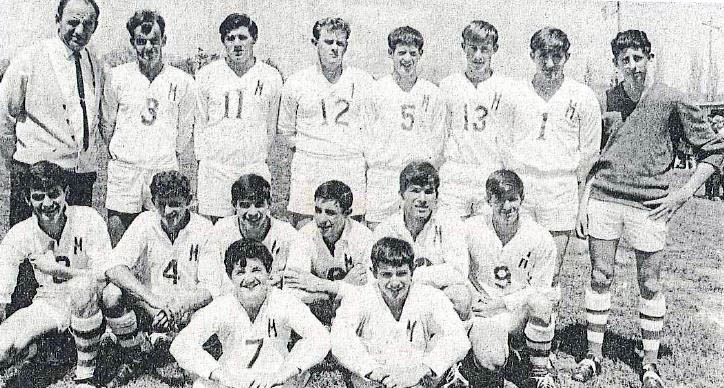