DUBBO greyhound trainer Paul Wasson dominates both the rich 302m Outback Fly and 421m Outback Sprint at Moree on Monday after yesterday qualifying two runners in each final – but he says it was Outback Fly Heat 3 runner-up In Sized Out that was the most impressive of his four finalists.

In Sized Out (3-1) was poleaxed after missing the start but flew home late to finish one-and-a-half lengths behind Tim Anderson’s hulking 11-8 favourite Swift Trigger.

“She missed the start and got pelted and punched and went out the back, but came home like a steam-train,” Wasson said.

“I was rapt in the run – it was the best run of the day of my four dogs.

“What she did to finish second was unbelievable. It was an enormous effort – better than my two winners, Wait To See and Bekim For More,” he said.

Wasson said Outback Fly Heat 1 winner Wait To See (3-1) was a surprise packet after trialling just fairly on the Moree track earlier in the week.

The fawn dog emerged from the pack to race away and score by two lengths from Steve Bell’s Avenue Hero (5-2) with Vicki Vale (4-1) three parts of a length away third.

“I lost sight of him around the back but he found the fence and rolled home. He was just too strong for them – it was a good run. 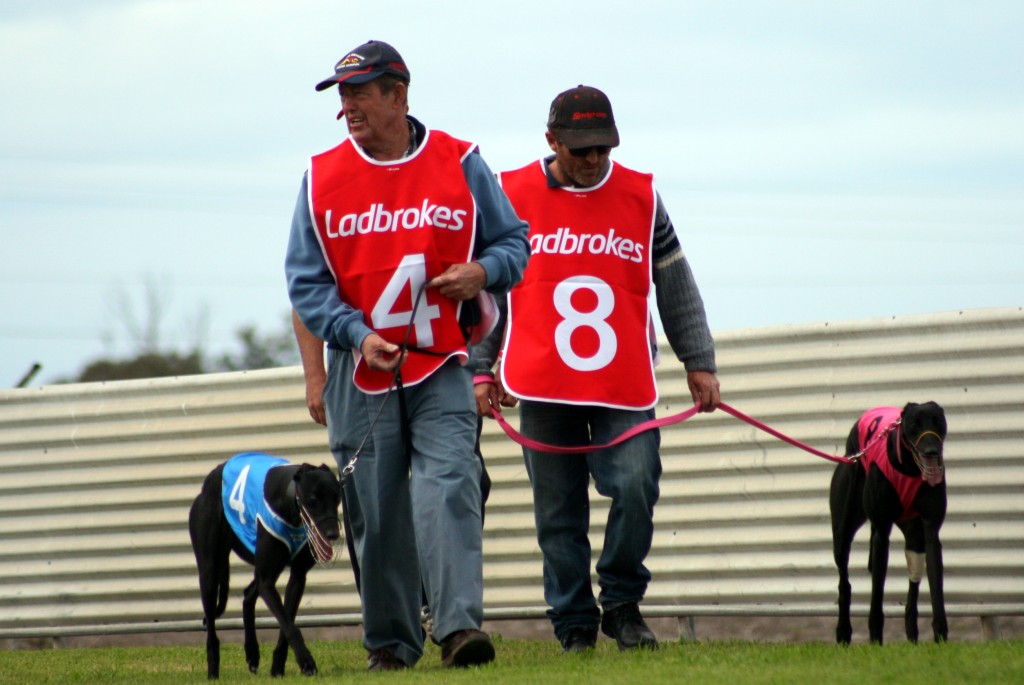 De Zooya (4) was an impressive five-length winner of Heat 2 of the Outback Fly at Moree on Saturday (Image Copyright Bill Poulos).

“We didn’t come to Moree with any great expectations and came up here last week to trial a few. He trialled fairly, but it was nothing exceptional,” he said.

Outback Sprint finalists Bekim for More and Aberdeen Angus will both back up on Monday after posting impressive heat wins yesterday.

Bekim For More (3-1), the smallest dog in the field at just a tick under 24kg, overcame a hammering to race clear and beat Kerry Perret’s Sahara Girl (6-1) by two lengths in a slick 24.04 seconds.

“It was a very good win; she’s a very honest chaser,” Wasson said.

“She’s only a little bitch and Over and Out, the 3 dog – he’s a big dog – cut her off through the first corner.

“But she drove through him and found the fence and went ‘bang’ – and ran a good time.

“She was getting along; I was rapt in the run,” he said.

Kennelmate Aberdeen Angus (2-1) rounded up Wasson’s quartet of finalists after leading throughout from box seven to win Heat 3 of the Outback Sprint by three lengths from Cold As Ice (3-1) and 6-4 favourite Shakey Randle.

“Aberdeen Angus has only just come back from injury and that’s her second run in a month,” Wasson said.

“She pinged the lids and led by six or seven lengths around the back. She tired turning for home but held on.”

Dallison’s Little Gesture (5-1) finished runner-up to Nina Rose Hi (6-1) in Heat 2 of the Outback Sprint while Ayre’s Dalair Pearl (6-1) filled the same spot behind even-money favourite El My Girl in Heat 4 of the Outback Fly.

“We bought Dalair Pearl as a pup from Shane Robinson at Casino and Little Gesture was a giveaway from Sonia Kempshall at Grafton, and from five starts for us he’s had a couple of seconds and third,” Dallison said.

“They both put in really good runs. They ran 24.11 in Little Gesture’s heat and he was only beaten about three lengths, so I’m ecstatic with that run.

“As long as they draw good boxes they should both go all right. You need a lot of luck in finals, so a lot will depend on the box draw,” he said.