IT is the omen bet to end all omen bets.

On a special day at Royal Randwick where a memorial race named in honour of well-known Moree businessman and Pallamallawa farmer, the late Anthony ‘Dipper’ Diprose, is programmed, there is one runner that will carry the hopes and prayers of an entire village – and beyond – at 4.30pm on Saturday afternoon.

And what makes Kool Vinnie’s inclusion in the capacity field so special is the fact that he’s part-owned by Dipper’s neighbour, friend and harvest-contracting partner, Phillip ‘Roughie’ Tonkin.

Dipper’s wife Bec will be trackside at Randwick with her family and close friends, and there’s only one horse in the 16-strong field that this close-knit group will be cheering home – Kool Vinnie.

“I got to know Bec and Dipper when they first moved to Pally from Moree – Bec’s just down the road from us,” Tonkin said. 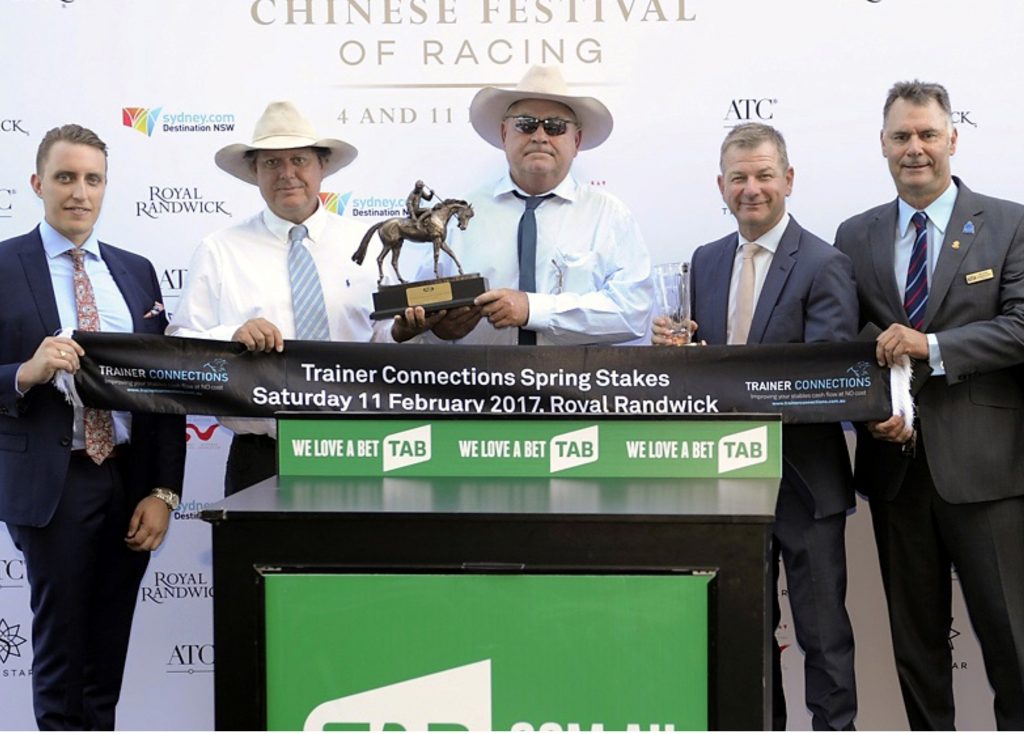 Roughie Tonkin (holding trophy) and Charles Hill (second from left) and their trademark Akubras, accepting the Spring Stakes trophy at Randwick, won by Invincible Gem. Their horse, Kool Vinnie, is the omen bet to end all omen bets in the 1400m Anthony Diprose Memorial Handicap at Royal Randwick on Saturday (Image courtesy of Bradley Photos).

“Dipper and I used to be in partnership with a header and I do all their contract farming and sowing, have done for a long time.

“When you look at the chances of Kool Vinnie racing on the same weekend on the same program, and the chances of him being in the same race that’s named after Dipper, it’s all pretty amazing – there’s a bit of good karma happening there, I think,” Tonkin smiled.

“When I told Bec that there might be a horse that comes from Pally in her race, she said ‘you’re kidding’.

“It will certainly be a bit of a fairytale if we are able to go to Randwick and do all right in Dipper’s race,” he said.

Kool Vinnie, trained at Newcastle by Kris Lees, deserves a change of luck on Saturday after finding genuine excuses in recent starts, including a last-start ninth at Rosehill Gardens, beaten just four-and-a-half lengths behind Solo Mission.

“Things didn’t go his way . . . but I’m getting sick of saying that,” said Tonkin, who shares ownership of Kool Vinnie with his brother-in-law, Quirindi cattle farmer Charles Hill.

“I think Vinnie will go all right (at Randwick) – he’s got as much chance as any other horse in the race,” Tonkin said.

Aaron Bullock takes the ride on Saturday and will need plenty of luck from barrier 14.

“Aaron rides the horse in all his trackwork and has probably been on him the most over the years,” Tonkin said.

“The horse has drawn wide again but he’s never been one to be up hunting for the lead – getting back has always been his style.

“From about eight starts this preparation he’s probably had two where he’s had a decent run – that’s when he won and ran second, both times at Canterbury.

“When he won he was second-last on the corner but he got out and got wound up. We just don’t want him to get slotted in on the rail and have horses outside of him where he can’t get out,” he said.

To read how the 1400m Anthony Diprose Memorial BM-77 Handicap came about, click the following link:

Sinclair sweats on a cup run – at Moree and Gunnedah