At about 8pm, Moree Fire Brigade was called to the Balo Street branch. Station officer Scott Beers said it was the quick response that put paid to what could have been a major inferno – the second of its type in a matter of days.

“The quick reaction of the retained firefighters stopped what could have been a major fire,” Mr Beers said.

“Crews in breathing apparatus ensured there was no internal fire spread and ventilated the building which was heavily smoke logged.

“CCTV footage is being used to determine the cause of the fire. 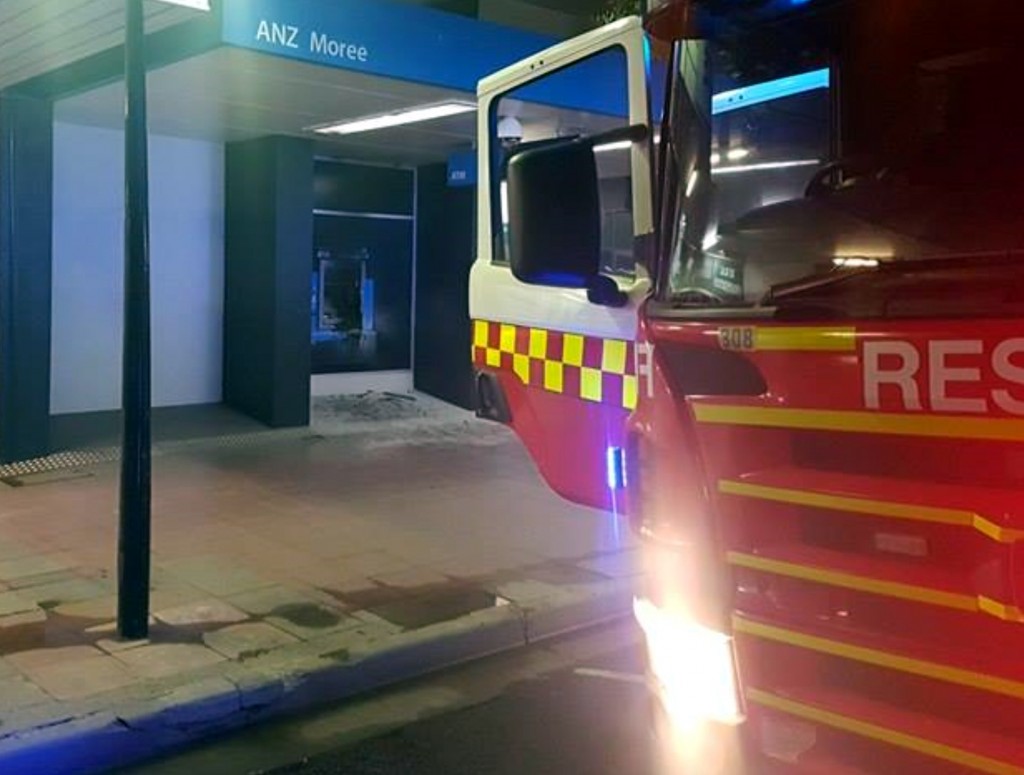 “Moree Fire Brigade has been called to a number of deliberately-lit fires in the last fortnight and we urge anyone with any information to call Police,” he said.

In a separate attack on Thursday morning, an attempt by would-be arsonists to set fire to a Frome Street business failed.

The front doors of the Moree premises were doused with diesel and set alight however the fire quickly subsided and no major damage was caused.

“I came into the shop by the back door, like I do every morning, and noticed that there was the smell of smoke in the air – at first I thought it might have been an electrical fire but when I looked around and went to open up the front door I realised what had happened,” the store owner said.

“There was considerable damage done to the door and it delayed our normal opening time by about four hours.”

A soft-drink bottle and spirits’ bottle – both containing traces of diesel – were left on the footpath in front of the store.

The incident was reported to Barwon LAC and is being fully investigated.

“Police have obtained CCTV footage from the street and hopefully they might have a fingerprint from one of the bottles,” the store owner said.

Both arson attacks, believed to be unrelated, come on the back of a week of high crime for Barwon LAC.

Early Wednesday morning a stolen vehicle was used by unknown offenders to gain entry to a Frome Street business on at around 3.45am.

The vehicle was stolen from another business on the outskirts of town and driven into the street access of the building, causing considerable damage however no property was stolen.

The stolen vehicle was recovered in Wirrila Street.

Crime scenes have been established by Barwon Local Area Command and investigations are continuing.

Meanwhile, 35-year-old man is facing one count of armed robbery after being apprehended just minutes after robbing a supermarket at around 9.50pm on Wednesday.

It is alleged the man threatened a 23-year-old shop attendant with a sharp implement and demanded money.

The man allegedly took packets of tobacco and left the scene on foot.

He was arrested and taken to Moree Police Station and charged with armed robbery.

The man appeared in Inverell Local Court on Thursday.

He was refused bail.

Information in the form of locations, possible offenders or suspicious activity is welcomed by the Police and can be reported via calls to the Moree Police Station on 6757 0799 or Crime Stoppers on 1800 333 000.

Share
Share:
“You just won’t find a better bloke”: Stan Jurd just one of many to farewell legend Bernie Briggs