Darren Jones to be remembered at Warialda Cup meeting

A PALL will hang over the picturesque Warialda racecourse next Saturday as family, friends, colleagues and members of the racing community pause to remember jockey Darren Jones, one of the true greats of bush racing.

Jones was tragically killed in a three-horse fall at Warialda 12 months ago when his mount Montague Clan, trained at Moree by Peter Sinclair,  blundered and fell in the 1000m Warialda Sprint.

Now, one year later, the pain is still raw for Darren’s wife Sheridan and their two boys, Jacob and William.

“The last 12 months have been incredibly hard but I’ve been very, very fortunate that I’ve had a tremendous amount of support from my family and friends, and the racing community at large has been wonderful,” Sheridan said.

“Pete (Sinclair) has been unbelievable and without a doubt he has been my biggest supporter in the racing community.

“(Hunter and North-West chief steward) Shane Cullen has been wonderful also and, as we get closer to the 12 months since it happened, Peter Caskey, the Warialda Jockey Club president, has been quite generous with his time and has been very supportive,” she said.

“But my family and Darren’s family, as well as all my work colleagues, and Pete Sinclair and Shane Cullen, have by far given me the greatest support during the last 12 months. They have all been so wonderful.”

Henry suffered a broken collarbone and made a successful return to the saddle about three months later.

Bolwell spent several months in hospital at the Gold Coast after fracturing her neck and suffering serious head injuries.

A stewards’ inquiry conducted by Shane Cullen, Jack Penfold and Marc Van Gestel concluded late last year and found that the fall was an accident.

“It was determined that there was no rider error apparent and the incident was caused by the manner in which Montague Clan was racing at that time,” the final stewards’ report said.

“A veterinary examination of Montague Clan found that the gelding sustained a fractured off-side scapula due to the incident and there was no evidence of any pre-existing condition, which may have contributed to the incident.” 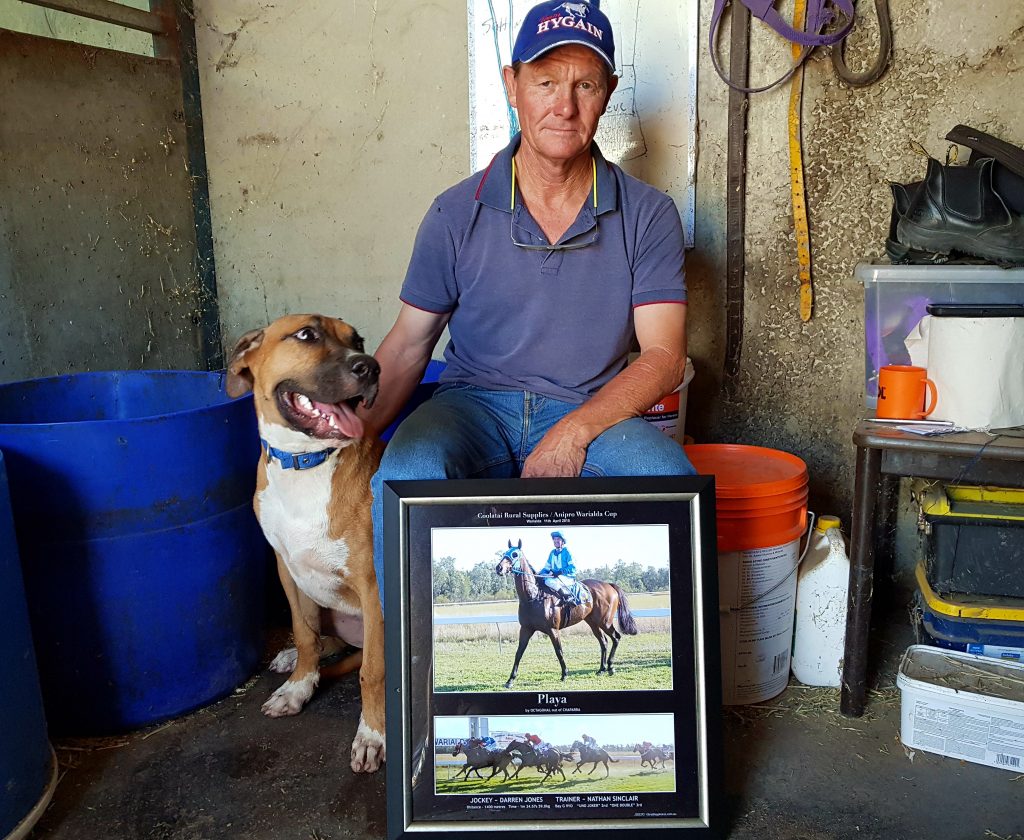 Moree trainer Peter Sinclair with a framed print of Darren Jones winning the 2015 Warialda Cup that he and his son Nathan will present to the Warialda Jockey Club at next Saturday’s annual meeting, which marks one year since the tragic death of Jones. Sinclair has travelled a rough road in recent years. He lost good mate and stable foreman Tony McCosker back in 2015 and is still trying to get over the loss of Jones. Pictured with Sinclair is his trusty hound TJ, named after McCosker and Jones . . . Tony Jones. (Image Copyright Bill Poulos)

It was also determined that there was no issue with the track that may have contributed to the fall.

Next Saturday’s meeting will pay tribute to Jones’ career.

He went on to become the leading junior rider in the north and north-west and that success continued well into his senior years.

He rode more than 800 winners and partnered some outstanding horses, including bush marvel Akwazoff.

The pain is also still raw for Sinclair, who saddled up Montague Clan on that fateful day 12 months ago.

It was supposed to be just another day at the office for Jones and Sinclair, a partnership that had produced scores of winners over the years.

The union also shaped an enduring friendship that is not often seen in the dog-eat-dog world of racing, especially in a game where trainers and jockeys can be best mates one day and enemies the next.

It only takes one bad ride and the friendship is over.

But Jones and Sinclair had known each other for a long time. Of similar age, they rode against each other when Sinclair was still small enough to be a jockey.

Sinclair kept growing, however, and a career in the saddle was short-lived.

He switched to training – following the footsteps of his father Phil and grand-father George – and this enabled him to book Jones whenever the opportunity arose.

Jones and Sinclair’s son Nathan teamed up three years ago to win the Warialda Cup with back-marker Playa.

It was an unlikely win, and only the masterful horsemanship of Jones got the old gelding home.

And now, as a tribute to the fallen rider, a framed image of Jones returning to scale on Playa will hang proudly in the Warialda Jockey Club’s jockeys’ room – a fitting mark of respect to a remarkable horseman.

Sheridan said that a photo of her husband’s winning ride in the Warialda Cup was a fitting tribute to a jockey that gave so much to bush racing.

“I know that Pete didn’t train Playa but there is a family connection there and Pete always reckons it’s not the next-best thing when Nathan trains a winner, but the best thing,” Sheridan said.

“It’s an appropriate choice given that it’s Warialda and Darren did win the cup there.” 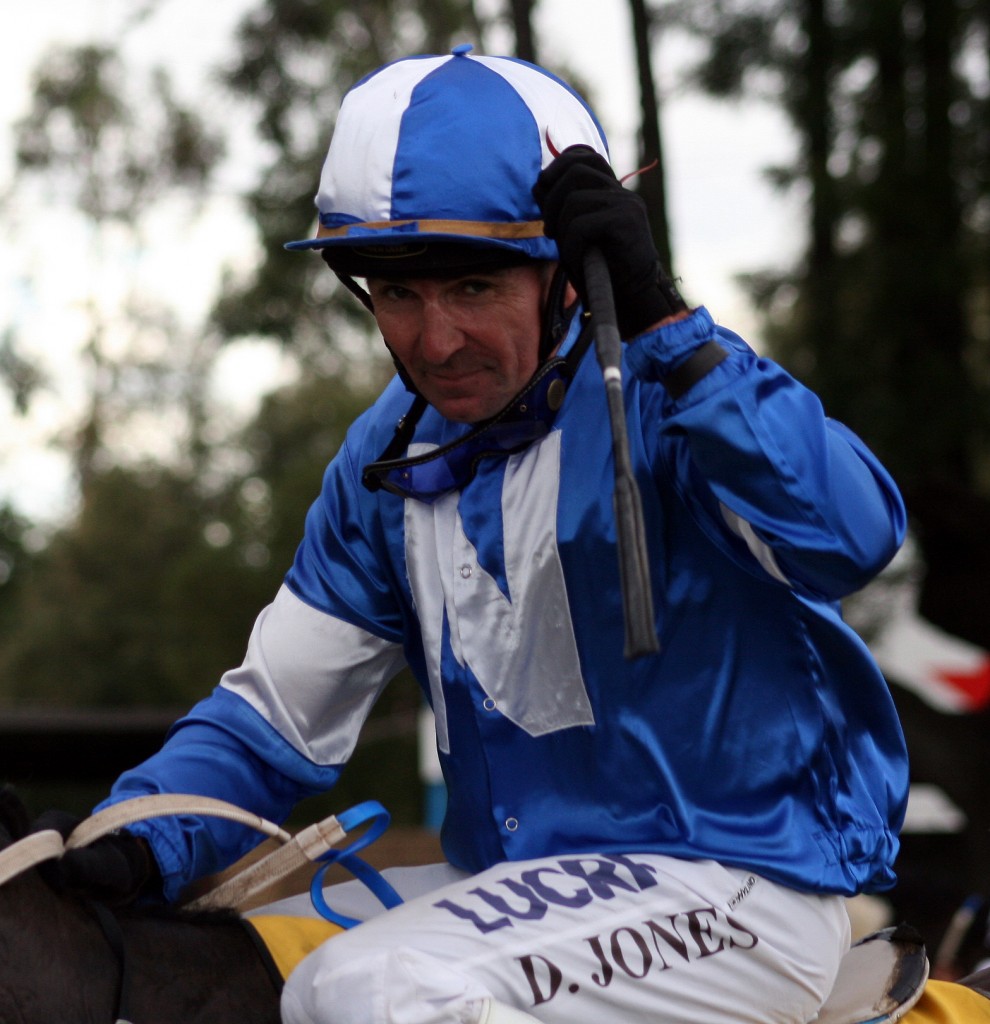 Sinclair has travelled a hard road since his mate’s passing, and he and Nathan, along with Sheridan, will present the memento to the Warialda Jockey Club at next week’s annual meeting.

Sinclair said that there was a special trainer-jockey synergy between himself and Jones that always got the job done on race-day.

“And as a person, Darren was one of the best blokes you would ever meet, and that’s just not in racing.

“You get to meet many different people as you go through life and even though Darren and I never lived in the same town I just know that we would’ve been best friends if we had.

“There was just this synergy; we understood each other,” he said.

“The past 12 months has been hard but it is nothing compared to what Sheridan and her two boys – and all of Darren’s family – have been through.

“I keep in touch regularly with Sheridan and she is an amazingly strong person.

“Really, what I’m going through pales into insignificance when I think of her grief,” Sinclair said.

Sheridan will be trackside at Warialda next Saturday, and it’s something she says that she needs to do.

“It’s something that I want to do for the racing community and also for the Warialda Jockey Club,” Sheridan said.

“They are going to name a race after Darren and being there is something that I want to do.

“There will be a lot of people there that were there on the day and friends and family of mine will also be there.

“I’ve also had a lot of support from people that I work with – they have been wonderful – and a lot of them will be attending the meeting also.

“Yes, it will be very hard but I will have a lot of people there with a lot of support, but I’m not the only person that will find it difficult.

“There will be people going there that have had a tough time over the last 12 months, so hopefully we will be able to be there for each other,” she said.

Winning the 2015 Warialda Cup with Playa was a special day for our newly-formed syndicate of owners – especially given that it was a day when most of us thought the horse couldn’t possibly win.

We kept forgetting that Darren Jones was on board, though.

That was our problem.

A few of the syndicate faithfuls went over to Warialda to watch ‘Jonesy’ guide Playa home from next-to-last on the home corner – generally acknowledged as an impossible task on the tight Warialda track – to score by a lip.

We really didn’t expect Playa to do so well that day because we knew the track would be against him.

Playa was one of those horses that liked to drop out the back and then storm home at a rate of knots – he just wasn’t expected to win.

But we were on a picnics cups’ mission and Playa needed this run to get him ready for the Golden Triangle.

Also in the Warialda Cup field that day was another Peter Sinclair-trained galloper called One Double, and it too was being aimed at the Golden Triangle at Moree, Mallawa and Talmoi.

There was always a bit of friendly rivalry between the Playa camp and the One Double camp and I remember calling Jonesy a couple of days before the Warialda Cup to let him know that our syndicate would “look after” him if he just happened to get the old horse home.

But deep down I thought Playa couldn’t win.

He was second-up from a spell on a track that clearly didn’t suit and he had a long campaign ahead of him.

At the end of our conversation I said: “Seriously Darren, Playa is no hope of winning but if you can at least beat One Double home there’s a carton in it for you.”

I never went to Warialda that day, and to this day I regret that.

It is one race that I’ve always wanted to win as an owner and Darren Jones made that wish a reality.

About two hours after the race, however, I received a text message from Darren.

It was short and sweet and oh so succinct – typical Darren Jones style.

It still makes me smile.