Dark Eyes, a well-tried 11-4 favourite, parked behind the leaders before jockey Tim Clark made his winning move just after straightening for home.

The gelding, trained by Gai Waterhouse and Adrian Bott, knuckled down like a good horse to score by a half-neck from Cool Chap (15-4) with Coolcat Dancer (10-1) a length away third.

It was also a day to remember for Clark, who secured a feature double when 30-1 outsider Trapeze Artist raced away to win the 1200m Black Opal Stakes by a widening three lengths.

Peter Taunton, who couldn’t be trackside with co-owner Geoff Hunt because of work commitments, said Dark Eyes – a seven-times winner from just 17 starts with nearly $330,000 prize money in the till – would now more than likely tackle the 2000m Albury Gold Cup on Friday, March 24.

“I wish we had got down there for it but you can only do what you can do.

“Tim (Clark) said he was going to make the leaders work for the first few hundred metres and then take a position. 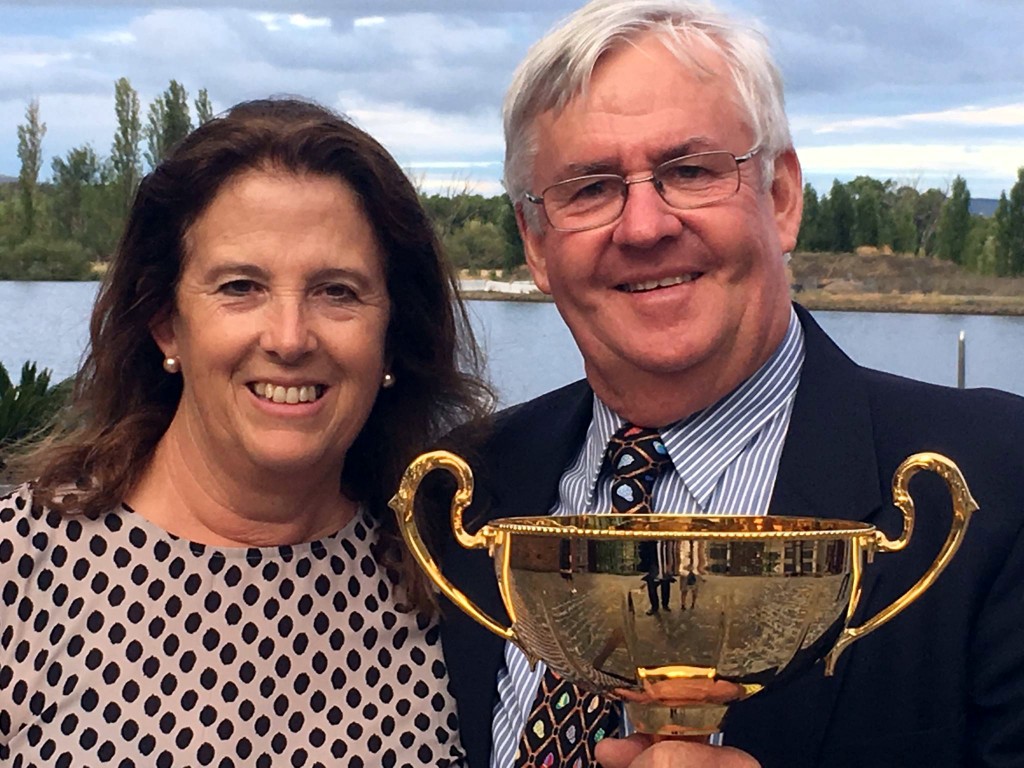 Geoff and Pru Hunt with the coveted Canberra Cup after Dark Eyes’ easy win in the Listed feature race on Sunday (Image Supplied).

“Just as they came around the turn Tim shifted him off the fence – he said had a bit of horse under him,” Taunton said.

After all, it’s every racehorse owner’s dream to win a race in town, let alone Listed and Group events.

Hunt and Taunton have both collected the Mallawa Cup – General Relativity for Hunt and Saint Lenny for both of them – but winning the $200,000 Canberra Cup has taken them to a whole new level.

“It was a pretty good day when we won the Mallawa Cup with Saint Lenny, but to win a Canberra Cup is unbelievable,” Taunton said.

Sadly, it was the death of a horse Taunton and Hunt had previously part-owned that enabled them to sign the deeds for Dark Eyes.

“We’ve had a few horses that never, ever got to the racetrack,” Taunton said.

“We were in another horse that had to be put down, unfortunately. It was covered by insurance and all we had to do was put in another $300 to get into Dark Eyes.

“A lot of people don’t even get a chance to start a horse in town. Really, it’s all just the luck of the draw and when anyone goes into a racehorse, they are taking a lottery ticket,” he said.

And the big question on everyone’s lips: Will Dark Eyes head north-west for the Mallawa Cup in June?

“Shit, I hope not,” Taunton laughed.

Ridden by Brenton Avdulla, Invincible Gem tried to lead throughout on a heavy track over the tough Randwick metric mile but was caught right on the line by Team Hawkes’ Inference.

Tonkin, who shares ownership with his brother-in-law, Quirindi cattle farmer Charles Hill, was still numb two days after Invincible Gem gave her all against the colts and geldings.

“We’ll give her some time out now and then make a decision on her next run.

“To do what she did over the mile at Randwick on a heavy-10 track took a bit out of her – it was one hell of a run,” he said proudly.

“She obviously has come a long way . . . just a bit heartbreaking to get beat like that,” he said.

Click this link to read about the lead-up to both feature races:

Click this link to read how Pallamallawa farmer Phillip “Roughie” Tonkin came to own a filly that is a champion in the making: http://deluxecafemoree.com.au/roughies-gem-a-cut-above/