NINE-YEAR-OLD Moree local Charlie Crouch has collected and deposited nearly 5000 used cans and bottles at the Moree Reverse Vending Machine – and he’s only been collecting recyclables for three weeks.

The statistics also revealed that the region is home to the State’s top individual recycler.

Mr Marshall met Charlie and his mother Kathy at the Moree collection point today to help the youngster deposit another 52 bottles.

“I’ve checked everywhere and I can announce that Charlie is officially the State’s top recycler, collecting and depositing more cans and bottles than any other individual anywhere in NSW,” Mr Marshall said. 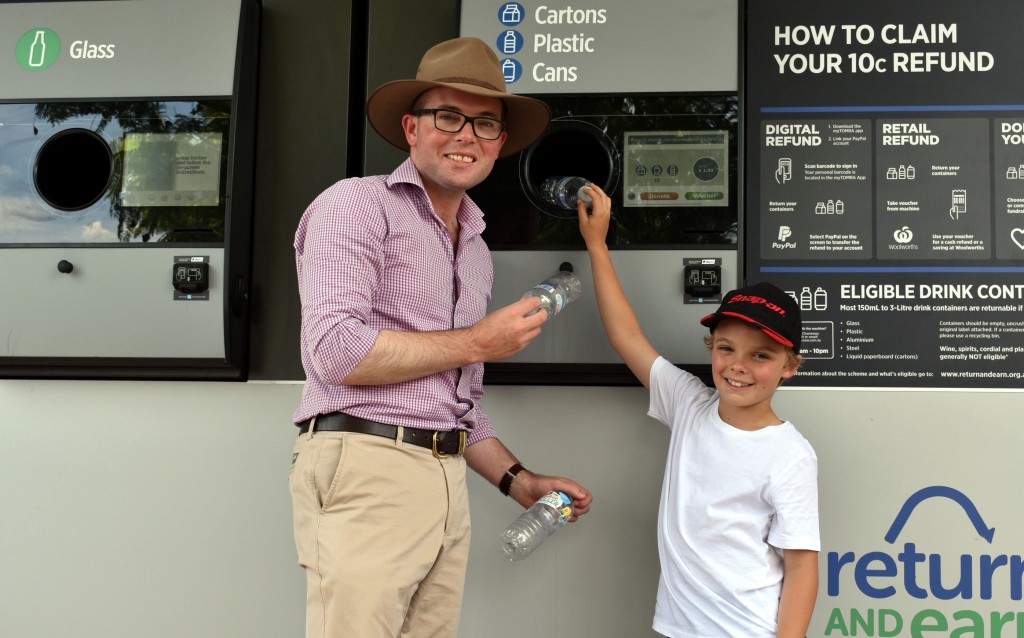 “This is a tremendous achievement for someone so young. It shows how easy it is to get involved in the scheme and Charlie is a setting a great example for those much older than him in the community.”

Charlie has used the money he has earned to purchase a golf cart and now he wants to keep going to pay for the fuel and buy some presents for his family.

“Charlie’s turned his school holiday downtime into a serious entrepreneurial opportunity. He even now pays his mum some fuel money each time to drive him to the collection point to deposit his collection, so good on him,” Mr Marshall said.

“After well over one million containers returned by people across the Northern Tablelands, our region is depositing containers at three times the state average, and Charlie has proven to be the best of the best.

“This goes to show the Return and Earn scheme isn’t just an excellent way to reduce litter and protect our environment, it’s an excellent earner for individuals and groups with the initiative and drive.”

Local collectors have been returning so many cans, cartons and bottles that RVMs have been filling up almost as fast as they can be emptied.

Mr Marshall said the scheme had even directly boosted employment, with one collection point taking on more staff to handle the volume.

“Bingara IGA has seen a respectable boost in foot traffic and sales since signing onto the scheme – and has even employing two more young staff members to help sort through the returned containers,” Mr Marshall said.

“This shows how enthusiastically Northern Tablelands locals have thrown themselves behind Return and Earn in the few weeks since the program began.

“With money to be made, I encourage businesses to consider signing up as a collection point, and community groups to make the most of the scheme as a fundraising opportunity.”

Beginning December 1, the Return and Earn Scheme allows consumers to claim a 10 cent refund on containers by returning them to a variety of collection points.

Mr Marshall said that the region’s six locations were just the beginning.

“When each centre has a collection point, focus will turn to providing consumers with more options about where they can return their containers,” Mr Marshall said.

“My first priority is ensuring that whether you’re in Armidale or Ashford, you can collect your well-deserved refunds with minimal inconvenience.”

As of January 10, the Northern Tablelands had collected and returned 1,019,900 containers from: