A Bill Haley-style comet or two just might be seen – and heard – over Crooble and Croppa Creek next weekend when a well-known cast of proud bush entertainers take to the stage for the My Golden Triangle 1950s’ Variety Show at the Crooble Hall.

The one-night-only performance will have all the familiar faces of local live show entertainment and it is expected to be standing-room only as the iconic Crooble Hall fills to capacity on March 17.

Jayne Vickery-McDouall, the lady who has put the whole shebang together on a shoe-string befitting one of Carl Perkins’ iconic blue-suede shoes, says audience members are urged to twist and shout their way into the Crooble Hall next Saturday.

“It would be great if the audience could dress up in 1950s’ outfits – there is nothing better than getting everyone dressed up for a good old-fashioned get-together,” Jayne laughed.

The Crooble-Croppa Crackers, a group of amateur thespians and entertainers from across the district and beyond, started out as a local singing troupe, entertaining bush folk at various events across the region. 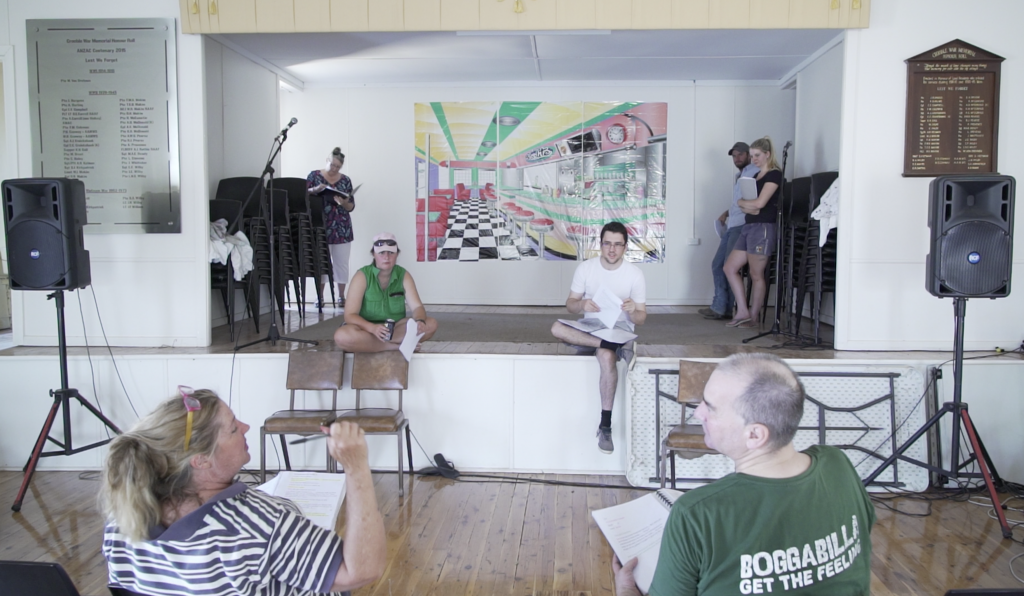 Rehearsals are well underway for My Golden Triangle at the Crooble Hall.

The group was soon top-billing at community events across the Golden Triangle – a district north-east of Moree so-named because of its prime agricultural land that stretches across Crooble, Croppa Creek and North Star.

It was decided last year to put on a full-blown revue to help raise money for the historic Crooble Hall.

“We started out by asking people in the Crooble and Croppa Creek communities if they would like to start a singing group and soon we were getting together once a week,” Jayne said.

“We then started singing at local events like the Croppa Creek Anzac Day Service and Crooble Christmas Service.”

The group, with many members well-known to the Moree public after appearing in sold-out shows The Red Barn and Sticky Sweet, began rehearsing for My Golden Triangle last year before taking a break over the Christmas-New Year period.

“We actually started practising before Sticky Sweet got off and running, but then I got busy with that and a lot of cast member were away during the holiday break as well – we really didn’t get back in to it until late January, early February,” Jayne said.

My Golden Triangle, written by Jayne in collaboration with mother-daughter duo Nicole and Stevie Drenkhahn and produced by Sara Bartelen, boasts a line-up of superb town and country talent.

The 10-strong cast – with many members making their stage debuts – hail from Gurley, Pallamallawa, Boggabilla, Croppa Creek, Crooble and Moree.

“Merri-May Gill and Fi Claus are my music, lighting and sound angels and Stevie (Drenkhahn) did the choreography,” Jayne said.

“My role is to direct and keep things moving along and to organise costumes and props and Merri-May, with all her millions of talents, has given heaps of helpful hints.

“There is so much talent around our district and getting people to come out of their shell and try something new was not an easy task, but we have all enjoyed it,” she said.

“Some of the cast members have never been on stage before, so this is a huge thing for them.

“They all do a wonderful job and, of course, the local talent from Moree love the chance to show off and have a good time. It is great that they have come on board to help put My Golden Triangle together,” Jayne said.

“It all takes place in a 1950s’ café with a jukebox – one made of cardboard – with boys being cool and girls giggling in the back seats of cars.”

The 1950s was an iconic era and a major turning point for the worldwide music industry. 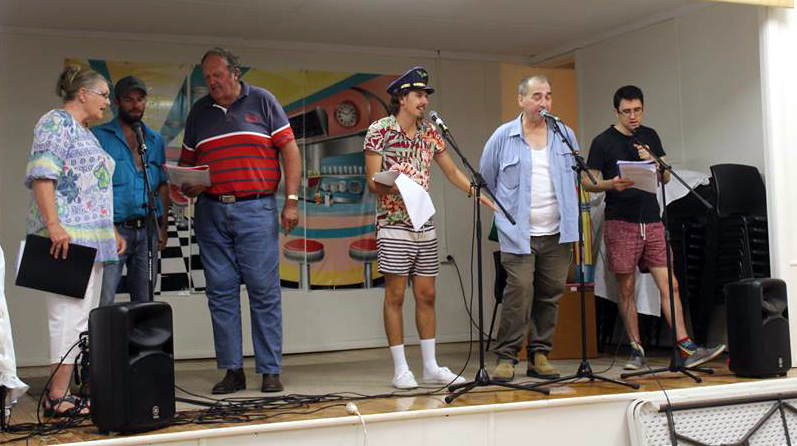 Cast and crew rehearse for My Golden Triangle.

When Bill Haley and his Comets told teeny-boppers in 1955 exactly how to rock around the clock a genre was born, and it’s one that continues to influence and dominate music across the globe.

It was an influential post-war decade of change that launched the careers of Elvis Presley, Fats Domino, Jerry Lee Lewis, Little Richard, Chubby Checker, Buddy Holly and the Crickets, The Everly Brothers, Dion and the Belmonts, Gene Vincent and Screamin’ Jay Hawkins just to mention a few, and a big chunk of that defining 10-year chapter of musical history will shake, rattle and roll the Crooble Hall rafters next weekend.

“There were some great artists and songs around in the 1950s, and back then the Crooble Hall would have hosted many dances and social get-togethers,” Jayne said.

My Golden Triangle will see over-the-boot sock protectors swapped for lily-white bobby-sox and weather-worn Akubras traded for oodles and boodles of Brylcreem.

“My Golden Triangle won’t be as raunchy as Sticky Sweet, but I’m sure the show will shock people – I think that is why I enjoy doing this,” Jayne laughed.

“And my cast has a free rein, so you never know what they will do on the night, especially with the likes of Greg Fisher, Will Penfold and Stevie Drenkhahn up on stage.

“To top the night off, one of our pollies might be serenaded as well,” she smiled.

“We have had a lot of help from the Crooble community who will supply a light supper with tea and coffee and soft-drinks, bottled water and ice-creams available for purchase on the night.

“Now that is has rained, people are feeling relieved and getting ready to plant the winter crops so a good sing-along and laugh will be perfect before everyone gets back into it,” Jayne said.

The Crooble Hall doors swing open at 7.30pm next Saturday, after a 7pm meet-and-greet.

Tickets, which are selling fast, are available from Sylvia’s Fabrics, the Croppa Creek Store, Warialda Pharmacy and Reynolds Fogarty Moree.

A return-bus will also operate from Moree. Bookings can be made by calling Reynolds Fogarty during business hours on 6752 2287.