COUNCILLOR Greg Smith will support the Moree community if it favours a cashless welfare card, and tomorrow will argue to trial the controversial program across the Moree Plains Shire.

He has garnered important information that he wants to community to digest.

“I want to balance the debate with some factual information,” Cr Smith said.

The trial is a proposal that has divided Moree – as well as the town’s nine councillors – but Cr Smith says that after consulting with Ceduna mayor Alan Suter, he believes a cashless welfare card could go a long way to helping solve Moree’s many social problems.

Moree Plains Shire councillors will on Thursday debate the issue however community consultation is still needed, with a final decision resting with the Federal Government.

Ceduna, known as the Gateway to the Nullabor Plain, lies about 800km north-west of Adelaide in South Australia.

Cr Smith said he was buoyed by Mayor Suter’s glowing appraisal of the trial.

“When (councillor) John Tramby tabled the motion to look again at the cashless welfare card I emailed the mayor of Ceduna for some answers to questions that had been raised over this issue, as they had taken on a trial,” Cr Smith said.

“Mayor Suter included one very important point in his responses, and that was that the trial of the card had the support of the Indigenous community in Ceduna.

“I don’t pretend that social issues aren’t in every street and every socio-economic group but the indigenous community will be most affected by a cashless welfare card,” Cr Smith said.

“The other issue raised that wasn’t addressed by the mayor of Ceduna was that people may find ways to exploit the card holders.

“In a conversation I had with a retired magistrate on this point, he compared it to random breath testing.

“His comment was ‘people still drink-drive 35 years after RBT came in, but imagine what the road toll would be today if that was an excuse to abandon the legislation’.”

Cr Smith believes Moree’s future is at stake, and the introduction of a cashless welfare card will help the town’s adults of tomorrow.

“Social problems and quality of education are major issues we are facing,” Cr Smith said. 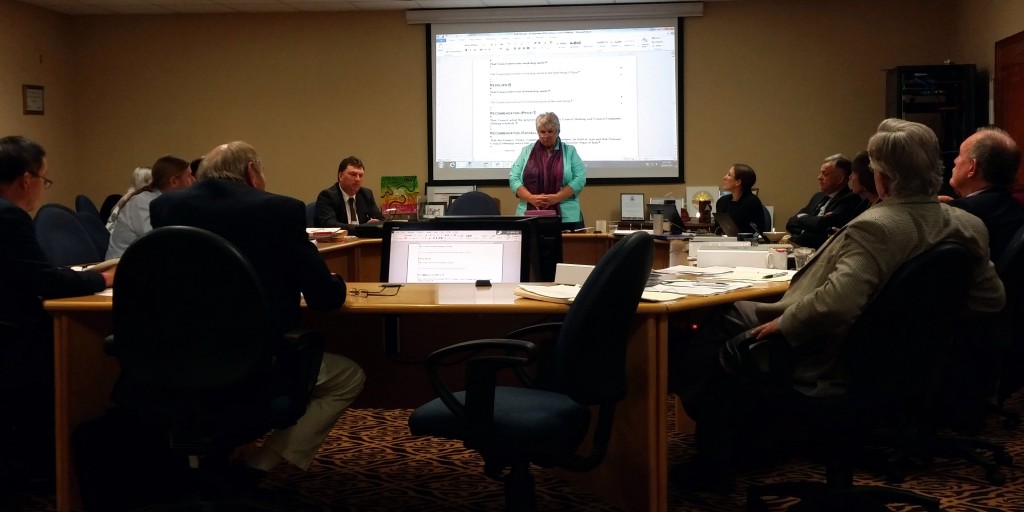 Moree Plains Shire councillors will on Thursday thrash out the pros and cons of trialling a cashless welfare card in Moree (Image: Copyright Bill Poulos).

Following are the list of questions tabled by Cr Smith and Ceduna mayor Alan Suter’s responses:

What were the major social problems you hoped to address?

“The social problems were too many to list but include family violence (and) neglect of children, health problems caused by alcohol and drugs, public intoxication, public violent incidents up to mini riots some years ago and damage to our town’s reputation with tourists because of the above factors.”

Do you consider the trial will deliver long-term benefits to the next generation?

“Absolutely. With our levels of trouble (as mentioned previously) hugely reduced and still improving.  I am confident that this trend will improve further. Family lives are the most encouraging factor and the benefits of this will hopefully be on-going.”

Was implementation of the trial a divisive process for the community?

“To some degree, initially, however we had the strong support of the local Aboriginal leaders and it would have been extremely difficult without this.  The original motion of council to support the trial was dependant of this support. Local drug dealers, drug users, gamblers and drinkers objected to the trial as they would.  Community support was, and still is, very strong.”

Do businesses need to change or update their payment systems to accommodate the cashless card?

“No. The card is accepted at any outlet that accepts credit/debit cards unless they sell alcohol or gambling products.  Unlike the Basics Card there is no need to opt in.”

Did the trial have a major financial impact on pubs and clubs in the town?

“There has been a downturn for hotels and clubs who were selling large amounts to welfare recipients.  Despite this they have publically supported the card and to some extent have re-gained business from non-card users who were previously repelled by the behaviours of some patrons.  Our answer to any objections was simply that any business model reliant on catering to welfare recipients with addictions is a very unhealthy way to make a living.”

What would you change, if anything, in the implementation or management of the trial?

“Nothing really, as the level of support and assistance from the Government was really high and any problems were quickly fixed, usually based on our suggested solutions.”

Mayor Suter said the trial has improved the quality of life for welfare recipients in his town.

“The trial has helped many people, especially families, and has greatly improved the reputation of our community,” Cr Suter said.

“We are certainly gaining tourism because of the improvements made in behaviours.  Most importantly, many children are the greatest beneficiaries as they are being fed, cared for and generally enjoying life to an extent that was not possible prior to the card.

“I am happy to recommend its use in any community that has a need (for it) because of social problems,” he said.

Key points regarding the Ceduna trial in a Cashless Debit Card Trial Progress Report tabled by the Department of Social Services on October last years include:

region. Since the start of the trial, approximately 300-plus people have sought financial counselling services in Ceduna;

Representatives from the Koonibba Community Aboriginal Corporation have observed

noticeable improvements in the community, including more children walking around with

cleaner, newer clothes and a significant decline in individuals requesting basic supplies (like

milk and sugar) from the Koonibba Community Shopfront.

Local police based in Yalata have noticed a reduction in cash and alcohol coming into the community, and a perceived reduction in violence as a result.

* This data is for the grouped Local Government Areas of Ceduna, Streaky Bay, Le Hunte, Elliston and the Lower Eyre Peninsula. Trial

Moree mayor Katrina Humphries is firmly in the other corner, and strongly opposes the trial.

She cites increased crime, the possibility of a “black market” festering in the shire and a downturn in trade for local businesses – including hotels and clubs – as major concerns should the trial be introduced.

Cr Humphries also says that the local tourism industry will be affected.

“We have been working and investing very hard on our social perception and tourism ventures, and we do not need to be classified in this way (as a town trialling a cashless welfare card),” Cr Humphries said.

“We are not isolated as a couple of the trial sites are, and while I am aware Australia has an issue with the social security national bill, this is not going to be a quick fix.

“Perhaps a better trial site in NSW would be a much bigger regional town, or even a coastal spot where employment is very low,” she said.

“Somehow I don’t think either option would be popular with those residents, just like it is not wanted in Moree by a large number of residents.”

St Phillies Spring Fair the place to be on Sunday

Ticking all the boxes for Sal on Saturday

Next post
Ticking all the boxes for Sal on Saturday