VOLUNTEERS and donors to the Royal Flying Doctor Service (RDFS) throughout the Parkes Electorate were given a boost this week, with the Federal Government granting an Australian Charities and Not-for-Profit Commission (ACNC) Registered Tick to the Flying Doctor.

“With bases in Dubbo and Broken Hill, as well as a presence right across Western New South Wales, the Flying Doctor is a vital service to many communities within the Parkes Electorate,” Parkes Nationals’ MP Mark Coulton said.

“Whether it’s the biannual fundraiser at Dubbo or Broken Hill, many Parkes Electorate residents are active donors to and supporters of the Flying Doctor.

“From today those donors can have even greater confidence that the Flying Doctor is a charity delivering on the needs of its patients and the expectations of its donors.” 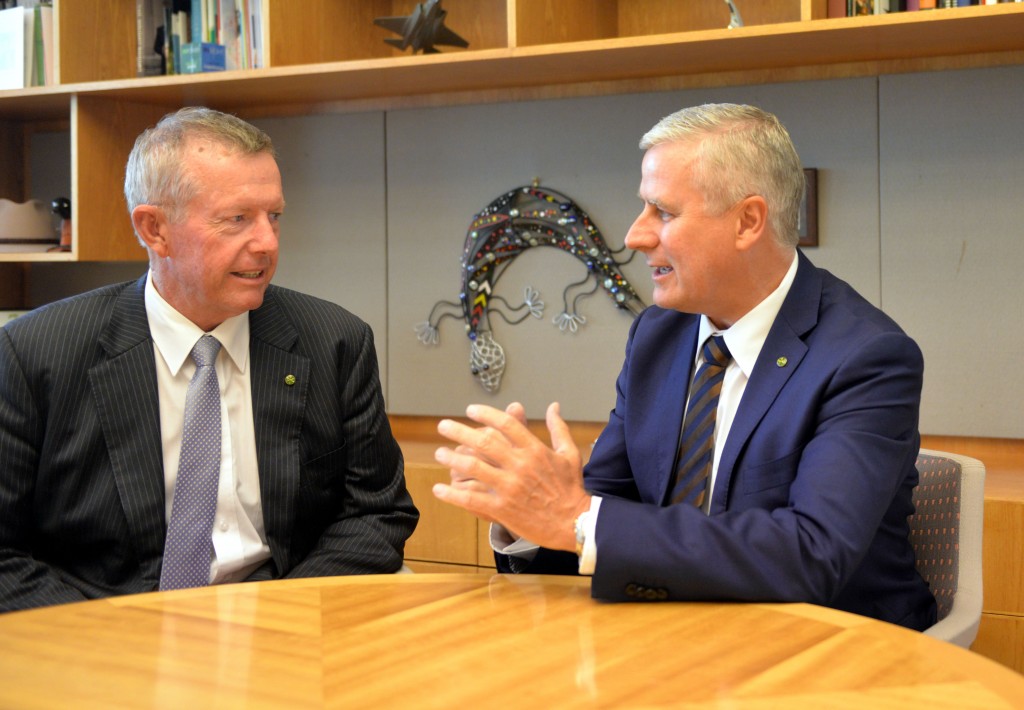 The Minister for Small Business the Hon Michael McCormack (right) explains the benefits of the ACNC Registered Tick granted to the Royal Flying Doctor Service to the Federal Member for Parkes Mark Coulton.

“From the far reaches of Australia’s outback to our towns and centres where urgent medical care is needed, the Flying Doctor is an essential service and is rightly synonymous with life in the bush,” Mr McCormack said.

“As a rural MP I know just how vital it is, which is why the Flying Doctor is supported by the generosity of so many Australians. This Registered Tick demonstrates what we all know – that the Flying Doctor is now and will always be there for people in the bush when they need it the most.”

Mr McCormack said Australia’s charity sector – and the people who support it – embody the best of our country.

“With more than 54,000 charities and annual revenue of $134 billion, our charities sector is as vast as Australians are themselves,” Mr McCormack said.

“The generosity and support of Australians to the charities sector, which increased by 2.4 per cent in this report, is complemented by 41 per cent of revenue from Government investment, to make real the ambitions and good will of the three million Australians who volunteer for a registered charity,” Mr McCormack said.

The Registered Tick, introduced by the ACNC in December 2016, authenticates a charity’s status and allows Australians to donate to the charity with confidence.

“The ACNC Registered Tick is the recognition Australians and charities want to know their donation is collected by a charity which accords with Australians’ expectations and goes to the people and communities Australians want to support,” Mr McCormack said.

“Already, more than 6,000 charities have been authenticated with the Registered Tick – including many household names, such as CANTEEN, the Cancer Council and the McGrath Foundation.”

“This means Australians can continue to donate with confidence and keep the Doctor flying.”

The report and the interactive data-cube can be found at www.australiancharities.acnc.gov.au.

Next post
Creating a youthful vision of Moree’s future