THE race will be on to see if tongs are quicker than tongues when local politicians Mark Coulton and Adam Marshall spice up the Blokes on the Barbie competition at Moree on a Plate next week (Saturday, May 13).

And while things get heated in the parliamentary bear pit, and they’ve dealt with a few pork chops in their time, their policy on the competition seems a little weak.

“I’ve cooked my share of chops in the backyard, but the ‘steaks’ seem very high in this competition,” he joked.

“I’ve got no idea what I’m walking into – I think parliament is even easier to predict!”

He admitted he would play it safe this year, choosing simple meats that he could cook well. 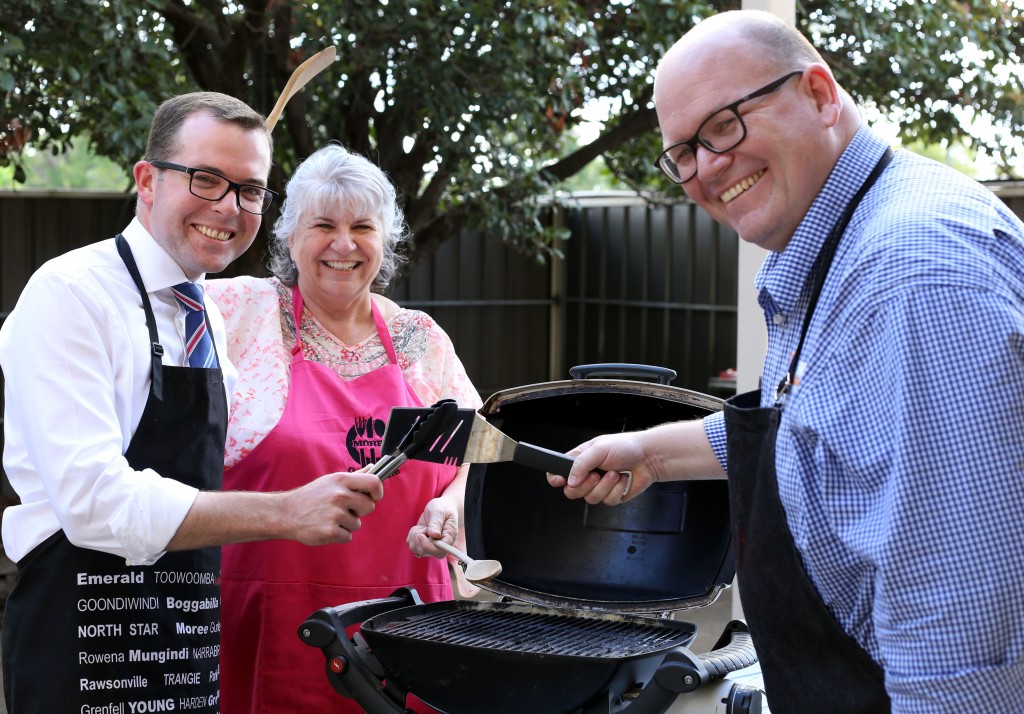 Adam Marshall, Katrina Humphries and defending champion Greg Cumberland will spice up the Blokes on the BBQ competition at this year’s Moree on a Plate.

Federal member for Parkes Mark Coulton said he was looking forward to the challenge.

While admitting that the art of cooking was still a mysterious process, Mr Coulton is planning a feasibility study in the most suitable method of turning raw protein into a delicious and tasty meal.

“Adam and I are forward to an entertaining and enjoyable day at the cook-off,” Mr Coulton said.

Well-versed in giving our pollies a grilling, local mayor Katrina Humphries will be one of the judges of this year’s event.

“I’ve worked over the hotplate at my business Fishabout for a very long time now so I know all the tricks of the trade. But I have a little tip for the day – I hate mushrooms,” Katrina hinted.

Greg Cumberland and Col Pring of WMG Agri Services will see Greg return to the competition to defend his 2016 winning title.

These two-man teams will take to the tongs for a blazing barbecue showdown, with a few ingredient twists to spice up the competition.

Organiser Marianne Pollock said the competition has proved a fun and light-hearted drawcard for the event.

Each team will receive a cut of their choice from South Moree Butchery and Reado’s Meats, and a mystery local ingredient allocated on the day.

“Last year this really kept the teams on their toes and certainly sorted out the men from the boys,” Marianne said.

Initially introduced to the Festival to get more men involved, Marianne said there was now a strong call for women to be involved also.

“Who knows, next year we could include some Girls on the Grill, then we’d really know who is King or Queen of the barbecue.”

Teams will cook off for the crowds on Weber barbeques, with the winners receiving their own Weber Baby Q, kindly donated by Mitre 10 Moree.

Quick-witted and sharp of tongue, popular local Anthony Diprose of Dipper’s Home Timber and Hardware will emcee the competition.

The Blokes on the Barbie competition, proudly supported by B&W Rural, will begin at 2pm during the festival on Saturday, May 13.

Bethany steps up to the Plate

Next post
Crockett’s artwork flies the flag in Moree