HE’S a sway-backed gelding with a head that only a mother could love.

There’s also the bunged-up knee that’s not too bad if you don’t look at it for too long, and the shocking bout of hair-loss that left the remains of his once near-black coat dull and listless.

He has suffered a litany of ailments and injuries, chiefly brought about by a sweat-related illness that nearly killed him.

And then there’s Angela Taylor, the strapper who adores him.

Unlikely racehorse Cool Rules – winner of last year’s Moree Picnic Bracelet and Carinda Cup – is on the comeback trail after earlier this year nearly dying from anhidrosis, a debilitating condition that takes away a horse’s natural ability to sweat.

After winning at Moree, Louth and Carinda, Cool Rules – trained at Moree by Peter Sinclair and owned by the Our Next New Horse Syndicate – resumed at his home track in December with a slashing third behind Mind Freak and Arawak.

But then it got hot, as it generally does at Moree around that time of year.

In fact, it got stinking hot – and humid.

At the Inverell Cup meeting on January 1, when humidity levels went through the roof, Cool Rules’ cooling system shut down mid-race in the time-honoured Shorts Handicap.

He was travelling third and fourth on the fence – looking a real threat at the 300m – before inexplicably tailing out and finishing a long last.

It was feared he had broken down.

Cool Rules wobbled back to the saddling enclosure, where it was discovered that he hadn’t sweated during the race; not so much as a single drop.

He was buggered, dehydrated, and panting like a thirsty pup.

After being hosed down and given plenty of water and electrolytes, Cool Rules was floated home and closely monitored by Sinclair.

After researching the condition it was discovered that there was no available treatment for Cool Rules, apart from a few old-wives’ cure-all remedies that didn’t amount to much.

His racing days were over, it seemed. 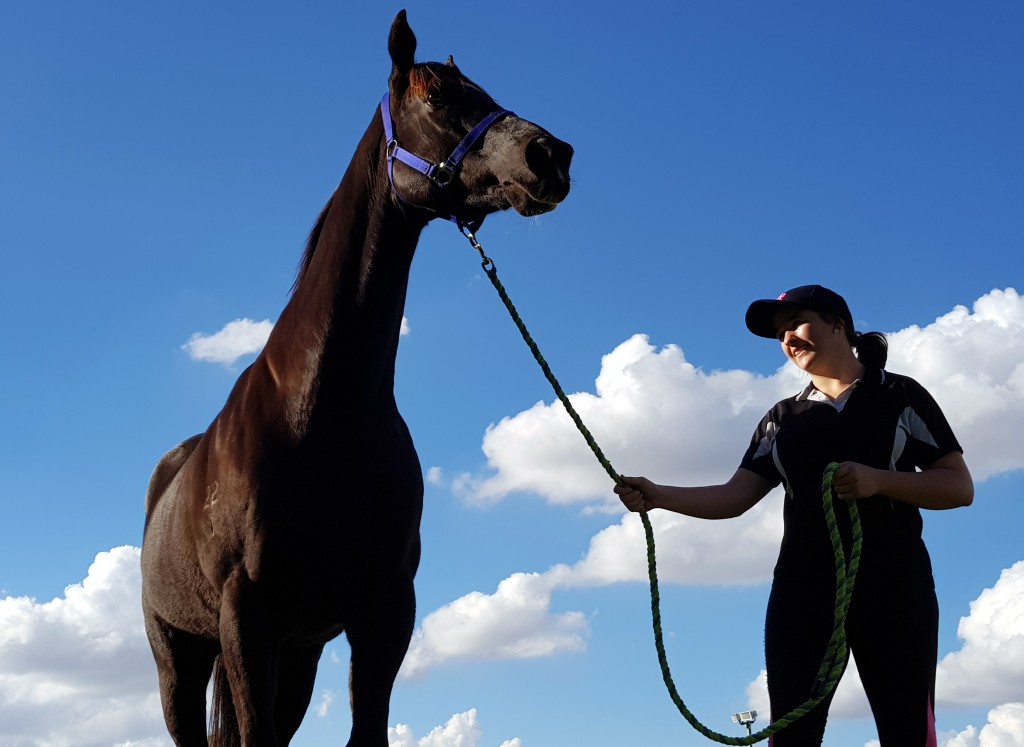 There were, however, a handful of documented cases of horses that had made full recoveries, given time.

It was decided to send Cool Rules to Andrew Phillips at Lee Carrow spelling farm near Delungra and hope for the best.

The horse would get ample rest and around-the-clock attention from Andrew and his wife, Wendy.

And 17-year-old Angela – number-one strapper and work rider for Sinclair – had already offered to take Cool Rules home to enjoy lush retirement if the five-year-old didn’t turn the corner while at Lee Carrow.

“He’s one of my favourites, definitely,” Angela said.

“He’s so easy-going and just so calm, and when he works he’s just so relaxed – nothing seems to worry him,” she said.

Meanwhile, as Cool Rules rested at Lee Carrow, a chance conversation between Tamworth trainer Stephen Dixon and Richard Wheeler – the brother and uncle respectively of Our Next New Horse Syndicate members Margie Heferen and Natalee Cook – shed further light on the horse’s ailment.

“I mentioned what had happened and Stephen told me that a trainer at Coffs Harbour, Trevor Hardy, once had a horse with exactly the same problem,” Wheeler said. 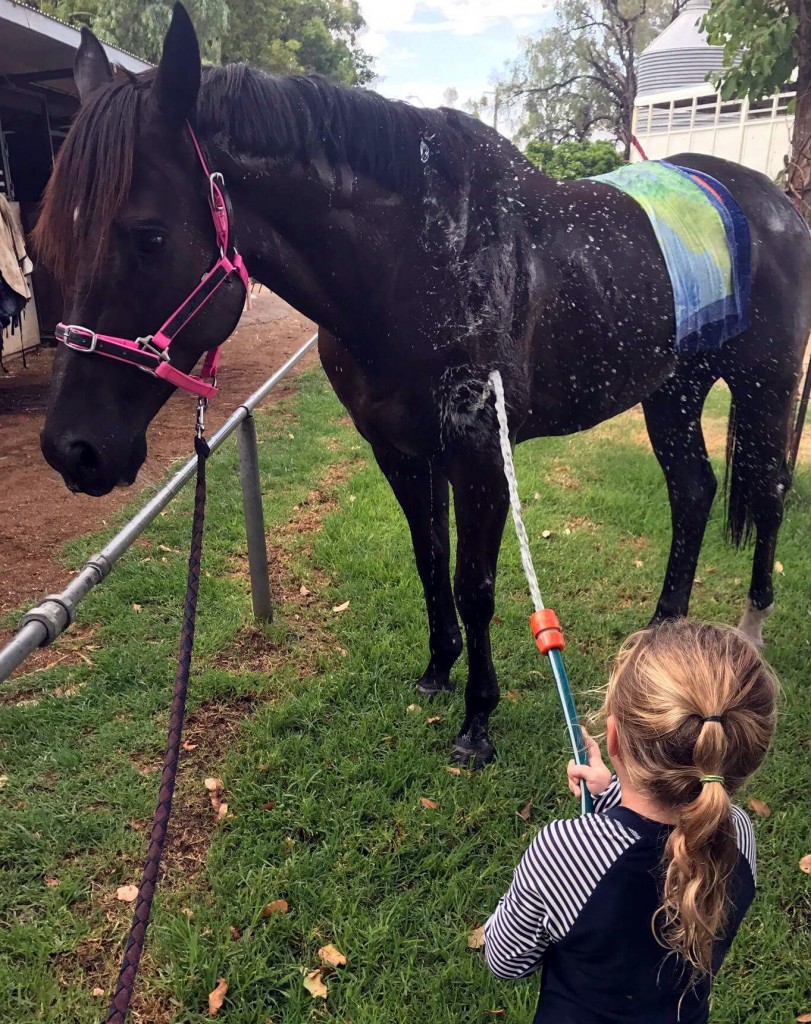 Back in January, when temperatures soared in Moree, Cool Rules was hosed down regularly to keep him cool. It was a labour of love for trainee strapper Alayna Williams (Image Supplied).

“The horse was given a course of treatment and eventually came good – good enough to go on and win more races.”

Hardy, who taught champion jockeys Zac Purton and Glen Colless how to sit in a saddle, was only too happy to help, explaining in detail the process and treatment he used.

“I got some special electrolytes from north Queensland, where this type of thing is quite common because of the humidity up there,” Hardy said.

“I think it seems to mainly affect tried horses that come out of Victoria that can’t handle the change in weather – especially the humidity – in north Queensland.”

Within a couple of months the text message that everyone wanted to read came through from Andrew Phillips: “It is very hot here today, and all horses are sweating freely . . . including your bloke.”

For more than three months Phillips treated Cool Rules as one of his own, and reports regarding the horse’s progress, treatment and general wellbeing were regular – updates were always only a phone-call or text message away.

“He’s just a beautiful, placid horse – I’ve got a real soft spot for him,” Phillips said.

Cool Rules was back, and he was putting a whole new slant to his name – cool does rule, it seems.

In fact, he was sweating heavier than part-owner Terry Picone after a bad day at the bookmaking caper.

The gelding’s near-black coat returned – thicker and darker – and the voracious appetite he was well-known for was back.

“He’s come back really good this time in,” Angela said.

“When he was crook he just wasn’t himself. Every afternoon (in early January) we’d have to hose him down to cool him off because he was coughing and panting, and not well.”

The ugly duckling of bush racing is now home with a new lease on life – but it’s wise not to mention the horse’s perceived lack of good looks or physical deformities, especially when Angela is around.

“I think he’s got a pretty face,” she argued.

“He’s beautiful, and he’s gorgeous when he’s in racing condition, but he does look a little bit feral at the moment,” she laughed. 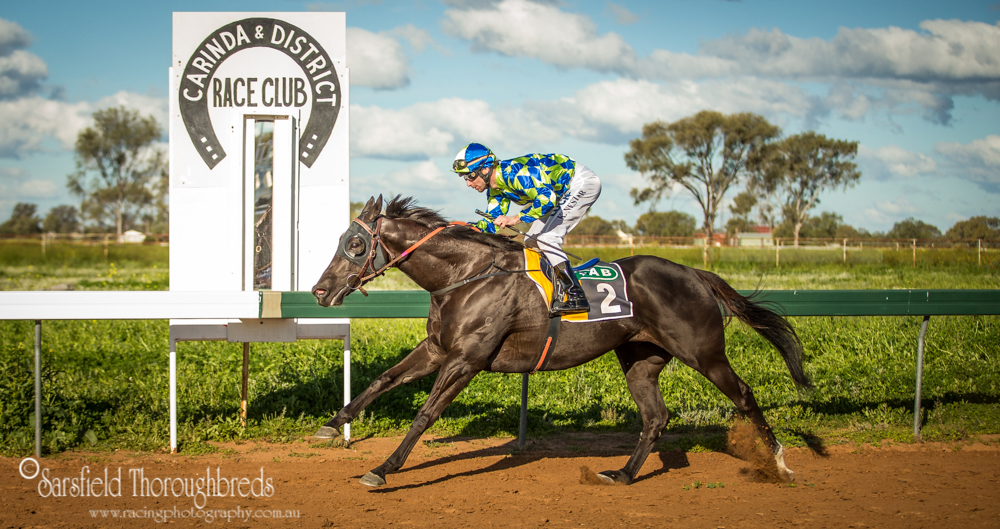 Oddly enough, Cool Rules is known around the Sinclair yard as the “old black horse”, despite being only a few weeks off turning six.

“He gives everyone the impression of being an older horse because of how well-educated and easy-going he is – and how he looks, too, I guess,” Angela said.

“Everyone thinks he’s older, because he just acts like an older horse would.”

Sinclair, who last month won his 11th Boolooroo Cup in 23 years at round one of bush racing’s Golden Triangle at Moree, readily admits that he did not expect Cool Rules to make it back from the edge of death.

“I really thought that it might have been the end of the road for him . . . I wasn’t confident he’d come back,” Sinclair said.

Sinclair’s fears were exacerbated by a long, hot, record-breaking summer, when temperatures soared to unheard-of highs.

“I would not have been surprised if we had got a phone-call, put it that way,” Sinclair said.

“He’s keener than ever and seems a bit brighter in himself, a bit fresher than usual; he pulls when I ride him, and he never, ever did that before,” Sinclair said.

Cool Rules is set to resume in the Helen Boland Memorial Talmoi Bracelet on June 24.

There’s just a bit of unfinished business to attend to out Garah way after finishing a desperately unlucky nose second in the 1000m scamper last year.

If Cool Rules gets through that first-up run unscathed he could embark on a bush cups’ campaign across north-western NSW and possibly Queensland.

“He really loves dirt tracks and there are a lot of races coming up that would suit him,” Sinclair said.

Meanwhile, Angela, who has crammed a lot of all-things-to-do-with-horses in her 17 years, is contemplating a career in the pigskin.

Angela has been riding her entire life and last year competed in the Mounted Games at the Royal Easter Show in Sydney. She has also competed for the past two years at State level.

“I’m into the fast stuff,” she laughed.

“I have often thought about being a jockey. I’m not quite light enough, but I am light enough to ride at the picnics (as an approved rider), and I’ve been giving that some thought lately,” she said.